Top Chef: A Cut Above or Next On The Chopping Block? 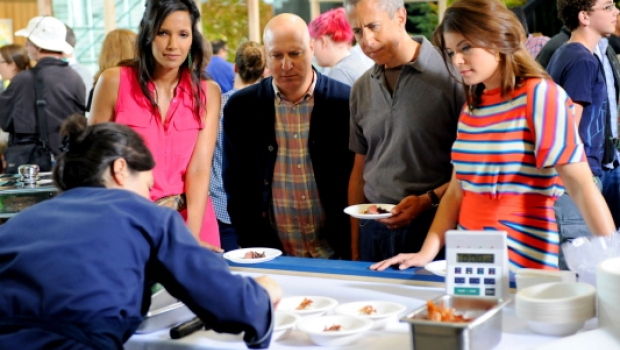 Tom Colicchio: What the hell is this?

I’ve always been a fan of cooking shows…and by fan I mean an embarrassingly avid watcher. Something about seeing people cooking and the processes they go through can not only be humorous at times, but for the keen budding chef it can be inspirational and educational. Throw in an element of competition and the excitement levels are off the scale (for me anyway)!

My all time favourite cooking show is Top Chef – an American (and therefore less well known in the UK) show that in my opinion manages to outdo any other show of its kind. The basic principle: fifteen chefs all compete for the title of ‘Top Chef’ along with a generous sum of money to help kick start their culinary career, with one chef being eliminated each week. The main portion of the show is the ‘Elimination Challenge’ – a large task set by a guest judge, often a celebrity chef (previous appearances include Wolfgang Puck, Eric Ripert and Nigella Lawson) in which each contestant must create a dish for a certain event ranging from an upscale wedding reception to a 4th of July street party. The chefs are then judged on their dishes and the losing chef is sent home.

A relatively normal cooking competition so far…however the challenge that precedes the elimination challenge is my favourite part of the show – the ‘Quickfire Challenge’. This is a chance for the chefs to win immunity for the elimination challenge or a bonus sum of money, and I believe this part is what makes Top Chef a cut above the rest. The chefs will normally have between 15–30 minutes to create a dish that adheres to specific guidelines, for example sometimes they will either have to cook using a certain ingredient or a certain flavour profile, which again is quite standard fare, however the judges often step the originality up a notch.

Some of my favourite challenges include the chefs having to buy three ingredients out of a snack vending machine and create a gourmet dish with their choices, or having to make a dish out of canned foods – the catch here being that all of the cans have no labels on, and whatever cans they open they have to use in their dish! These challenges really test each of the chefs’ creativity and ability to think on their feet. Naturally, some create absolute disasters, but at times there are moments of genius and some beautiful food is created from what you would have thought is an impossible ingredients list.

The other type of ‘Quickfire Challenge’ that can be presented involves testing the chefs’ knife skills. These tend to involve some form of relay race where each chef will have to complete tasks such as breaking down four chickens, shucking fifty oysters and peeling one hundred potatoes in the fastest time possible. It can be exhilarating to watch and some of the knife work is truly masterful (although it does make me feel useless when it takes me a lot longer than five seconds to peel a potato). Shows such as Masterchef and Iron Chef are a lot more one dimensional in that the focus is all on creating a dish – different chef skills are not tested and there is not as much chance for wacky and adventurous food preparation.

The one issue I have with Top Chef appears to be something of a common problem in a vast majority of modern shows, and that is that the producers don’t always seem to think that the food is the most important part of the programme. It is becoming more and more popular to include a ‘storyline’ alongside the content, whether that be showing snippets of arguments between the chefs or the potential of a budding romance. Between the challenges we are shown clips from their shared house and we get a feel for the group dynamic and the relationships between them. Although this is interesting to an extent, I would much rather be seeing more of a dish being cooked than 90 seconds of two people bitching at each other about who used all the rosemary. I’m not watching Come Dine With Me for a reason!

Does television with such strong content really need to include some cheap reality entertainment to keep viewers watching? If anything, the more drama that is added, the less I want to watch! Gordon Ramsay’s Hells Kitchen is all about the drama and very little about the food, and although I have been known to watch that too, it satisfies a different need and is not something that needs to be included in a serious cooking show – the food itself cuts the mustard.

As the Top Chef seasons have continued, more and more editing has taken place to make the show fast paced and filled with drama. Close up shots of each contestant’s face are now shown as they stand before the judges panel waiting to hear if they have been eliminated, as if the producers are screaming at us “LOOK HOW INTENSE THIS IS!!!!” Top Chef doesn’t need this kind of format – the challenges and the talent of the chefs are enough to keep the viewer excited and interested, and in my opinion the viewers who watch because of the cooking aspect of the show rather than the reality entertainment factor will definitely be as disappointed as me that the show could be heading in the direction of so many other fallen shows.

Although this is quite a big pet peeve of mine, Top Chef remains to be one of my guilty pleasures and I highly recommend it to anyone looking for a slice of culinary entertainment with a twist!