Things we’ve seen before? Stranger Things and the question of originality.

It’s a risky business channelling numerous well-known references of the 80s movie continuum into one television series. Some may feel that Stranger Things is lacking in originality due to its combination of motifs from the novels of Stephen King and movies of Steven Spielberg. Yet others – others holding the majority – see it as an homage to the era and are immediately hooked with this new Netflix sci-fi epic. The references to movies such as Stand By Me, The Goonies, E.T: The Extra Terrestrial, and the miniseries It, only serve to heighten the enjoyment of watching the show and reawaken a nostalgia in many – particularly for movie lovers who can compete in identifying the most allusions to these 80s hits.

The creators of the show – The Duffer Brothers – completely acknowledge that many scenes in Stranger Things are lifted from their 80s inspiration. For example, at one point, Eleven and the boys are walking along an abandoned train line in a forest exactly as Gordie’s group in Stand By Me did thirty years ago. The Duffer Brothers use these scenes as a direct homage to the movies that shaped Stranger Things; they know it’s not original and they know that doesn’t matter. The show may not be entirely novel, but it is entirely engrossing. In its first 16 days, 8.2 million people watched the series and it is already one of the most popular Netflix original series of all time. It does not need to be filled with brand new ideas or content; the show indulges in its references and nostalgic aesthetic, and it works. It’s a retelling of a tale that the audience think they know well, but, with plot twists and new characters, Stranger Things becomes much more than an homage.

Stranger Things traces the mysterious disappearance of a young Will Byers and the even stranger events that occur from then on in a small fictional town in America. The pace of the episodes and the fear and mystery behind each scene make the show a thrilling experience. It’s sinister and filled with suspense, but not too terrifying for those who scare easily. Even at the end of season 1 the case is far from solved as more issues arise and the characters are still in a vulnerable position. So far, Stranger Things isn’t as frustrating as, say, the elongated mystery of A in Pretty Little Liars, yet come season 2 who knows what parallel universe Will and his friends will be trapped in, and what government plot is behind Eleven, or if there are more Elevens? 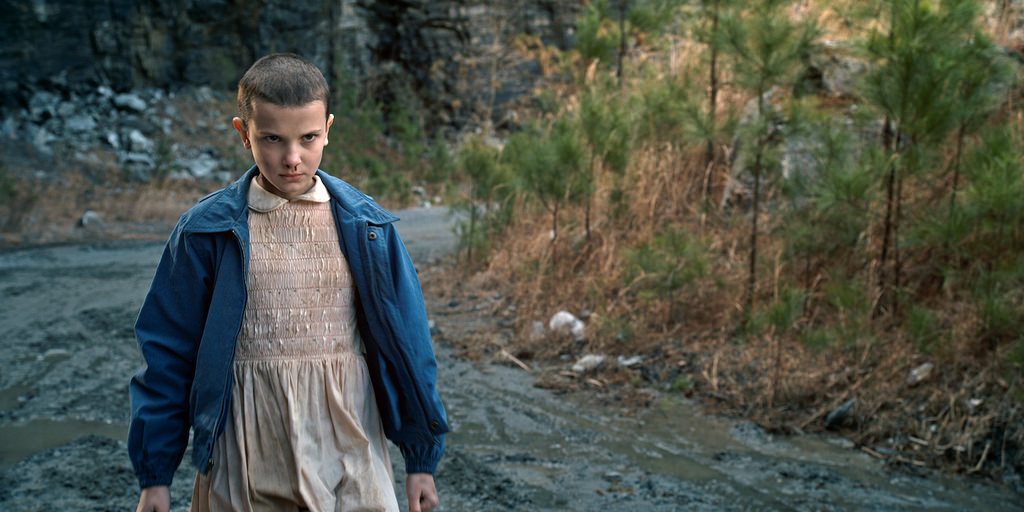 With sterling performances from all its cast and a captivating storyline, Stranger Things seems to hit every nail on the head. What is unique about this 80s inspired supernatural mystery show is the numerous explorations of character across three different generations. Firstly, there are Will’s friends, three wonderful young actors who bring the humour and banter to the show. Despite being incredibly reminiscent of Gordie’s bunch in Stand By Me and Elliot’s gang in E.T., they still find their uniqueness and are difficult to dislike. The edition of Eleven finally brings a girl into the mix of adventure and comradery, and along with the bravery of Nancy, Stranger Things is able to depart from its predecessors. Despite only saying a total number of 246 words (according to a post on Reddit), Millie Bobby Brown, who plays Eleven, is able to powerfully articulate her character’s fears and emotions.  Although Eleven may remind some of Stephen King’s Carrie – with the intensity of her gaze and telekinesis powers – she is able to enter the group of boys and form a special relationship with one of them (she also does not kill them all which makes her much more likeable than Carrie). The two main girls in Stranger Things are feisty, strong, and independent – role models for a modern generation with gender equality.; they fight just as hard, in some cases harder, than the boys in the group.

To add to the 80s aesthetic, Michael Stein and Kyle Dixon (from the band Survive) have composed the electronic and synth-rich soundtrack. The opening titles are eerie and transport the audience right back to the 80s. The Clash, Toto, and New Order also make their way into the show, and along with some pretty cool outfits, Stranger Things succeeds in being completely true to its period.

As well as all this brilliance, Stranger Things is, at the end of the day, wonderfully enjoyable and easy to get emotionally involved in. The show is highly addictive and with only eight episodes you’re sure to binge watch it in a flash; Netflix have viewers begging for more instantly after they’ve finished season 1. If you enjoy Stranger Things look out for It – the movie of Stephen King’s classic horror novel – which is coming out in 2017 as well, and which stars Finn Wolfhard who plays Mike in Stranger Things. There is also a wealth of movies in the genre Stranger Things has revived which are partially mentioned in this article but others to check out are The Lost Boys and Poltergeist.

The only downside to watching Stranger Things is its mass popularity; it’s no longer cult, it’s a solid hit. The show is rapidly entering popular culture and in the lead up to Halloween it is sure to inspire costumes galore. Viewers continue to debate over the numerous layers of mystery the show reveals, the budding relationships between the characters, and the sinister ending which only makes us cry out for more. Season 2 is due to air in 2017.