The undead: alive and killing 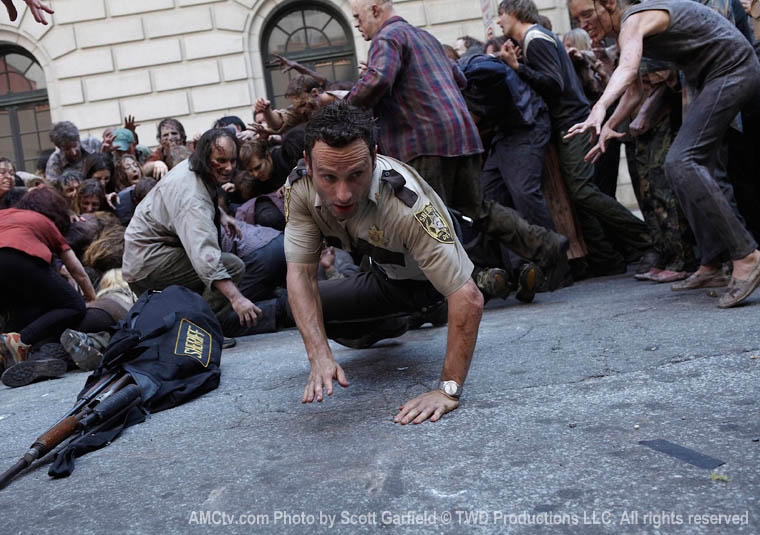 There is a dearth of zombies on television and yet an abundance of vampires. This is because the latter are at minimum useful befanged devices, paving the way to the dangerous, the taboo and to good old fashioned sex scenes. This pumps up the viewing figures. We love that one episode of True Blood has more breasts than a year’s worth of French Vogue. In contrast, zombies are ugly, decomposing things that tend generally to get in the way and want to eat our organs. How could we stand watching a whole show about them? Well, for one thing, many of us somehow suffered the sight of Cher Lloyd every week without our intestines leaping up and throttling our brains. We do have the stomach to witness semi-decayed halfwits stumbling around wailing.

For another, the opportunity for drama is equally valid in the survivalist scenario of a zombie apocalypse. Characters are put under tremendous strain and writers can muse on what parts of human nature come to the fore. Ought there to be compassion or viciousness? Cohesion or anarchy? Ought there to be more rhetorical questions in this article?

All of this makes for jolly fine entertainment and goes some way to explaining why Frank Darabont (The Shawshank Redemption) adapted Kirkman and Moore’s Eisner award winning comic book series: The Walking Dead. Over the pond AMC has already commissioned a second season. It is possible the commission was on the basis of Darabont’s attachment alone; he wrote and directed the pilot because he writes and directs everything he does and gets wildly nominated for doing so.

The plot is not particularly complex. A policeman gets shot, sinks into a coma and wakes up an indeterminate amount of time later to find himself surrounded by zombies. He has a family that he must find his way back to so that everything can be lent dramatic gravitas: and the British actor Andrew Lincoln was cast as that man.

We’ve missed him. And now he returns to us as Rick Grimes. Uniformed, gun wielding vanquisher of the undead, and yet an everyman, lost in a quagmire of disembodied rotting corpses and ethical dilemmas. And he has a rather snazzy American accent to boot.

Meanwhile, Rick’s colleague and best friend Shane (Jon Berthnal) is getting down with our hero’s wife (the rather attractive doctor from Prison Break, Sarah Wayne Callies). Oh the drama! They have joined a band of survivors on some God-forsaken hilltop with inadequate toilet facilities. The slight let down is the child portraying Grimes’ son, rendering all moments of filial affection rather empty. The rest of the supporting cast is strong, although with all those murderous creatures limping about expect the turnover rate of characters that appear central to be rather high.

The zombies themselves are beautifully ugly, immaculately filthy and quite terrifying. The success of the show depends on them being utterly believable. If they became figures of fun even for a moment the gravitas of the show would be compromised. The creators seem well aware of this fact: the very opening scene depicts a child – barely perceptible as one of the undead – being shot square in the face. Of course they still have tremendous fun with copious amounts of gore and disembodied yet animate limbs crawling about the place. And seeing these devilish things getting clobbered with various weapons is not without a certain schadenfreude.

The Walking Dead is a nepenthe, pure escapism in its finest form. The series possesses an elegance, self-awareness and quality that belie what we have come to expect from the genre. Zombies are back. And you will be bitten.

The Walking Dead continues Friday at 10.00 pm on FXUK and will no doubt be on a proper channel soon.