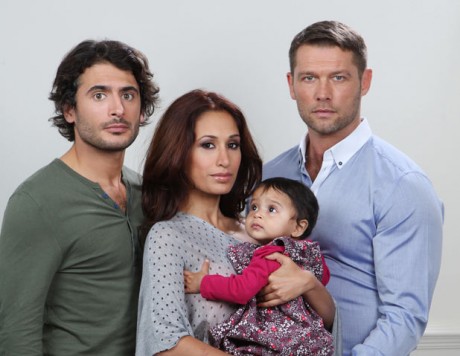 Will there be a happy ending for Syed?

Welcome to the second instalment of all your soapy needs! As everyone at Durham University is starting to get back into the swing of term life and the work starts piling up, the soaps have also been working hard in these past two weeks to keep their viewers hooked.

Down South in Eastenders, Syed’s life changes forever as his wife, who left the square after Syed declared he was gay over a year ago, returns holding his beautiful baby girl. Syed had no idea he was a father and is now torn between the “happy life,” as a father, or sticking by his long term life partner Christian. Seeing as there is no way she will let Christian see the baby, Syed goes behind everyone’s back and meets up with his wife to hold and play with his child, which just confuses his heart further.

It is not only Syed’s life that has changed for ever. Tanya is struggling to cope with the chemotherapy for her cancer and pours her heart out to her teenage daughter Lauren. Lauren keeps it together, but behind closed doors she breaks down as she is scared of her mother becoming worse and eventually dying. When a party starts up over at the Moon residence, Lauren swipes a bottle of her mum’s red wine and plans to block it all out. At the party, Tyler Moon (who has recently been heartbroken by Whitney) is drowning his sorrows in a bottle of vodka and when Lauren joins him, the night ends by them walking hand in hand up the stairs to the bedroom.

Over in the pub, following an argument, Kat Slater ends up having a one night stand (as far as we can tell), as the man keeps turning up at the pub and ringing her in order to make her worry about her husband finding out. Kat, not to be one to be pushed around, stands up to the guy before realising that if Alfie found out it would be the end of them for good. Luckily, Alfie booked a surprise holiday for the pair, but Kat can’t help but wonder what will happen upon their return. Ian, the local tight-fisted businessman, buys an expensive car in an attempt to impress his new girl Mandy. But after some very offensive jokes about Mandy being a stripper and how she should earn her keep that way, the car ends up with a gold club through the windshield and a pot of paint thrown all over it, much to the delight of the onlookers and to the despair of Ian who is forced to admit it was a rental car. In a rare moment of emotional heart-to-heart, Ian cries his fears out to his best friend before realising that women are hard work and just want to be loved, so proposes to Mandy! She says yes but wants Ian to prove that he means it. And with Roxy’s parenting being put into question this week, a little birdy tells me that the social services will be getting involved soon in a dramatic storyline of child neglect. Also, another little spoiler for you, is Syed really the baby’s father? And what will the DNA test say?

In Manchester’s most famous and dramatic street, Coronation Street, Carla is still struggling to come to terms with life after Frank’s sexual abuse. As the factory orders run low, she meets up with an old client friend famous for his flirty bargaining tactics, and half way through the meal and just before he signs the contract, she has a breakdown and loses her latest contract. Life gets even harder for Carla as Frank takes away his forty percent of the business including half the machines, materials and most of the clients. After confronting him and losing her cool, she has to let three members of staff go to ensure her factory does not go under. Unknown to her, Sally (one of the three) goes to Frank and agrees to work for him, and manages to convince Becky to cross the line over to her side, but will the others follow?

Meanwhile across the cobbles, Eileen’s love with the hunky fireman grows stronger, but Marcus, her tenant and close friend, sees Paul with his “wife” and is torn whether to tell her or not. Their relationship hits the next level when he stays the night, but the next morning Paul’s nowhere to be seen, and Marcus is forced to divulge what he knows. Eileen goes to his house and tells his wife everything, only to find out she has early Alzheimer’s and Paul just needed some love. Whilst Sian is away with her mum, her lesbian girlfriend Sophie is left at home missing her every second. Amber, jealous of their close loving relationship, moves in and comforts the lonely teen. As Sian’s return draws closer, so do Amber and Sophie when they share a steamy kiss after Amber spikes teetotal Sophie’s drink with vodka. And Rosie plans to stitch up her agent Jeff, who is dating her mum Sally, by catching him with another woman. Will her evil plan work?

Up in the Yorkshire dales, the farm is struggling to make ends meet and the Bartons are forced to ask their workmen to work for free. Even though everyone chips in and works every hour god sent, the farm is still left penniless and its owners struggling to make ends meet. Ever since Aaron helped his paralysed life partner commit suicide, he’s been struggling to cope and has resulted to self-harming to see if he still feels pain after being left numbed by his part in the assisted suicide. He manages to keep the worrying truth from everyone in the village, but his mother Chas finds out and now refuses to let him deal with anything alone. It’s not just the local bachelors that are having trouble with their feelings this week, Laurel (the vicar’s wife) cheats with Marlon, the local chef, as they share multiple passionate embraces despite her attempts to hide her feelings and tell Marlon nothing would happen. After an awkward conversation, they realise neither of them are ready to take the affair any further and struggle to see if their friendship can really last. Amy’s little secret is also out this week, when people start to realise she is carrying Cain’s baby. Cain’s jealous ex-girlfriend confronts him and tells him he must take responsibility for his actions. And when his Dad tries to offer him advice, Cain almost knocks him out! And then if things couldn’t get worse for Amy, her foster parents start to become suspicious. Who will be the next to find out?

These two weeks have been filled to the brim with drama and big story-lines. Hollyoaks is building up to its big Halloween storyline whilst the other big three are getting ready to set up their Christmas storylines. The next instalment of The Soap Bubble Diaries is guaranteed not to disappoint!