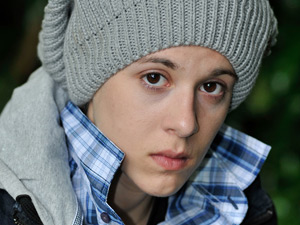 Jason: the centre of attention in Hollyoaks.

From the leafy village of Chester to the cobbled streets of Manchester and even round the squares of East London, there is always drama. And here on The Bubble, I aim to make sure the soap opera addicts just like me get all the gossip and the latest news from the soaps! So don’t worry, when the work or the partying gets too hard, you can rely on The Bubble to update you on everything you missed.

It seems this week it isn’t just our little freshers waking up with the hangover to end all hangovers. Hollyoaks university has seen its latest intake of fresh meat hit the SU bar like no other, and seen couples break up, the new rock girl lose her dignity and even Will, the man who oozes geek-sheek, forget his night and risk losing his girlfriend. It doesn’t look like things over in The Dog are running much smoother either. Jason Costello, formally known as Jasmine, is struggling to face up to life as a transgender teenage without hormone blockers so takes it upon herself to rebel against her family by almost ruining her brother Riley’s wedding by sending an incriminating photo of the groom to be tucking up Mizee, the local glamour model, into bed. Not only that, but Jason steals a motorcycle and ends up getting cautioned from the police. And to top of his terrible week, his parents eventually refuse to give him the consent he needs for his hormones leaving him in a pool of despair.

Unsurprisingly, Jason takes matters into his own hands, steals his father Carl’s debit card and orders the drugs offline. Jason thinks this will solve all his problems, all his issues and make everything easier, but something tells me this won’t be the case, especially when his parents find out about all the lies and deceit. But, that doesn’t end the troubles facing the Costello family, with Warren planning their downfall after finding out Carl slept with Riley’s future wife. Warren, been the man of patience and mind games, will bide his time to reveal said secret and will make sure that the Costello wedding is a day to remember, just not for the reasons they would hope. So that’s one story line to look out for!

Meanwhile, back in Manchester, the Street is never a quiet place. Carla is facing up to life after her ex-partner Frank raped her on the night before their wedding. Unable to face work, she retreats to her house and drowns her sorrows in a bottle, or three, of wine. After so much heartache in Carla’s life including losing the love of her life Peter as he swears to stick by his current wife, she reaches for the easy way out and overdoses on her tablets. After a heart felt plead for help, peter calls the ambulance and she manages to survive and wakes up with a new energy, a promise to start seeing a councillor and a positive attitude. But, in good old coronation street fashion, things just aren’t that easy. Frank is released on bail, sending Carla back in to a spiral of self-hate and depression. Stella, the new manager of the Rovers Return, makes an unexpected visit to Carla and reveals that she too was once raped! Inspired by Stella’s attitude and ability to move on, Carla finally returns to work only to find Frank’s mother running the factory. In fear, she threatens to ring the police but it soon becomes apparent that the mother has every right to oversee the factory and that she will be watching Carla’s every move. And if that wasn’t enough gloom and doom in one street, Kevin’s father has a heart attack and is rushed to hospital. Luckily, he also survives, but is determined to force his son and his new fiancé into peace talks. Kevin gives in and becomes friendly towards his father’s partner, but this unusual act of kindness could be due to Sally (Kevin’s wife but from whom he has been separated from since his affair came out) finally letting her guard down and spending the night with him. As the sun rose over the street, it was made apparent that Sally’s act of forgiveness was no surprise to her gossiping neighbours and Sally lashes out, throwing Kevin out on the street and seeks revenge by dating an old flame who has returned. And as Steve’s relationship with Tracey (who is carrying his child) deepens and his soon-to-be-ex-wife is watching, and Chris lies about his brain tumour worsening AND Frank still on the loose. Coronation Street is definitely going to be one to watching over the next few weeks.

Now, things down south aren’t getting much better either. In Eastenders, Eddie Moon discovers all the lies his newly reunited son has laid down around him. He finds out everything including the fact Michael fixed the boxing match so his brother Tyler in a critical condition in hospital, broke up his relationship with Carol after paying the desperate Vanessa to sleep with him and then trying to cover it all, and decides to leave the square. But in true sop fashion, only after robbing Michael’s gym of thousands of pounds and leaving Vanessa to take the blame. Michael, after repenting his terrible acts and missing the feeling of having his family close to him, hits rock bottom and sleeps on the floor of the gym, drinks far too much and sleeps with Janine, the local poisonous millionaire, before picking himself off the floor to try and rebuild his reputation. Zainab is finally looking back to her old self as she decides to take over the Arji-Baji and order her sons around, but her doctor Yusef Khan plans to put that to an end after suggesting more pills and threatening to return back to Pakistan which reverts her back to the paranoid, confused, sleep deprived wreck we are used to seeing over the last few months. Phil Mitchell has left the square for a few weeks, leaving his son, who has recently declared himself as homosexual, to deal with his confused feelings alone. Even though on hearing the news, Phil pushed Ben to the floor leaving him with a bruised eye. So, I would definitely recommend keeping your eye on all the stories coming up in Eastenders as they are definitely due a show stopper.

So what can you look forward to in my next soapy update? Well, there is loads more happening in the big three, deep plots are thickening in Emmerdale and hopefully next time I will cover some even more amazing story lines that will keep you truly hooked to your television screens!