The Oldest Question in the Universe 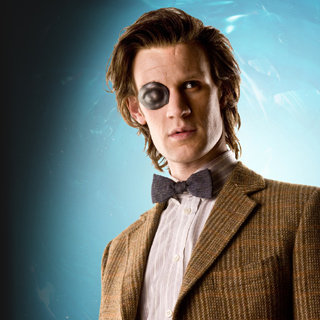 All right, so how many people saw that one coming? I would love to say I guessed the oldest question in the universe correctly, but I’ve been proven wrong so many times this series of Doctor Who that I just could not be sure. In retrospect, though, it’s clear that it was always going to be the question, hidden in plain sight in the opening credits of each episode. It just had to be.

At first, I was slightly disappointed to hear that the series finale would consist of a single episode rather than the usual two-parter. What with all the increasingly complex story-arcs and loose ends to tie up, it seemed that Moffat and his team would have a hard job squeezing everything into a mere 45 minutes. Now that I’ve seen it, however, it really was the best thing they could have done to end such a tense and nail-biting series. And it was so simple: River Song/Melody Pond indeed turns out to be the killer in the spacesuit, she was brainwashed at birth to murder the Doctor by the fabulous Madame Kovarian and her team of headless monks and she did end up making an honest man out of the universe’s longest-serving bachelor. I hope their marriage is full of texting and scones.

That’s not to say it wasn’t a difficult one to watch. One of the main side-effects of halving your allotted finale time is that it becomes less easy for viewers to keep up and in this case even I, a die-hard Who fan, found I had to remain glued to the screen so as not to miss any small detail which might allude to the final conclusion. At the time I thought it was odd for Stephen Moffat to give the tiny, miniaturised, time-travelling cross people a cameo appearance at the start of the episode, but with hindsight it all seems SO obvious! Of course the Doctor would blag himself a nice, shiny robot-Doctor suit to hide in whilst being shot at by his killer wife at Lake Silencio; it all makes sense now. And why Utah, of all places? Well it was nothing to do with the BBC’s ever-increasing reliance on American funding; it was because the lake is situated at a fixed point in time! Again, I would like to say I guessed the link correctly, but the credit must go to my housemate’s boyfriend who made the connection whilst I was staring at the screen open-mouthed feeling just a bit thick.

Some might criticise the episode for being a bit all over the place but in my opinion, any programme which opens with scenes of cars floating beneath hot air balloons, children being chased by pterodactyl ‘vermin’ in Hyde Park and introduces Winston Churchill as the Holy Roman Emperor is amazing by default. Especially programmes that see their eponymous hero reading ‘Knitting for Girls’ whilst waiting to ambush a sinister monk with a dodgy haircut in a dingy bar on the docks of Calisto B. Genius. Even more welcome was the appearance of a Dalek! Yes, their reputation as the most easily defeated villains in the known universe may have rendered their existence on the show little more than obsolete, but it was heartening to hear their dulcet tones once again.

Whilst at times slightly frustrating, the fast-paced nature of the episode meant that quite a bit of the action felt all the more urgent and tense, as the Doctor was moving closer and closer to his ultimate doom. It’s a well known fact that it doesn’t take much to scare me – I still can’t watch a screen alone since watching The Ring aged 14 – but I found myself watching a good deal of this Doctor Who series through my fingers. With the notable exception of the weeping angels, who absolutely TERRIFY me, the Silence monsters have proven to be the most sinister, effective evil aliens ever to appear on children’s TV. Balloon-headed electrocuting beasts which no living mind can remember seeing without a funky eye patch? No joke, I literally found myself checking the ceiling of my bedroom after The Impossible Astronaut. It was therefore a very chilling moment when the bearded soothsayer and Emperor Churchill began to notice the fateful marks creeping up his arms, signalling the presence of an invisible horde of deadly, sharply dressed creatures. It was a good moment, though, when one wisecracking Silent scathingly referred to Rory as ‘the man who dies and dies again’. It’s almost as if there was a long-running in-joke that Rory ‘Mr Hottie’ Williams is the Kenny of Doctor Who.

One of the best qualities of Doctor Who is the writers’ ability to juxtapose genuinely terrifying moments of peril with touching, emotional scenes involving the Doctor coming to terms with his guilty past. Indeed, it takes the news of the death of an old friend for the Doctor to finally accept that he cannot run from his own mortality forever. However, it is River Song who is the one to ultimately save the Doctor from his own self-pity by making him realise just how much he is loved. In direct contrast to her speech in the mid-series finale, A Good Man Goes To War, River says: ‘You’ve decided that the universe is better off without you, but the universe doesn’t agree’. It turns out to be the wake up call both the Doctor and the producers need in order to save the universe, tie up the remaining plot threads and effectively regenerate the show.

The Wedding of River Song could in fact prove to be the making of the show, allowing writers to re-boot a somewhat stale concept and explore new, unchartered territory. The epic two-part episodes involving the Doctor saving the entire universe from impending doom have been brilliant, but perhaps they are a little overdone now. It will be nice to see the Doctor operating under the radar for while, undertaking some more covert operations with his time-travelling companions (and his wife!).

I feel I might risk incurring the wrath of many critics and fans when I say that I fully enjoyed this series, and might now actually prefer Matt Smith’s awkward, floppy-haired Doctor to David Tennant. I know for a fact that some of my friends would publicly castigate me for having uttered such a blasphemy, but I really like how Stephen Moffat has breathed new life into the show. Yes, Karen Gillan’s ‘acting’ still consists mostly of standing around in a sexy outfit pouting at the cameras, but I thought the latest series was entertaining and far darker than anything before. I await the fields of Trenzalor and the fall of the Eleventh with bated breath.