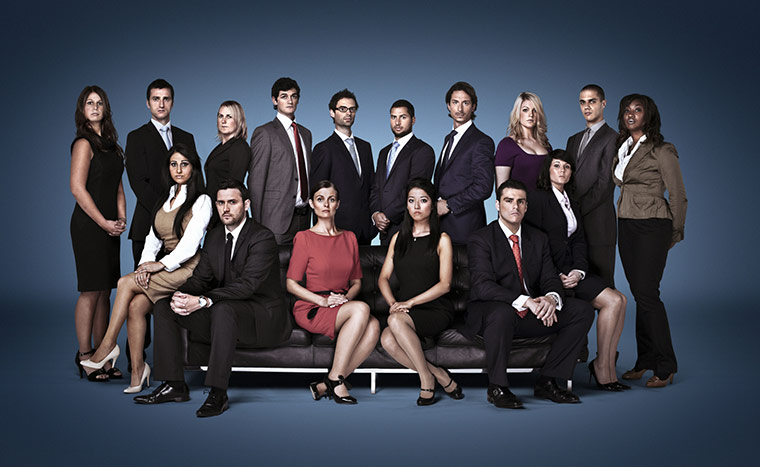 Eleven Down. Five To Go!

Watching The Final Five can often be a sobering experience. Here are five candidates that, over the last ten weeks, we have praised but also criticised, laughed at, and longed to be sat in Lord Sugar’s seat pointing the finger of doom in their direction. Therefore when you watch a programme which, amongst other purposes, seeks to show the television audience that these characters actually are real people, you can feel a sense of empathy. However, it can still be immense fun to review each candidate in a jovial way and this is definitely what is about to happen. Many weeks ago, I published which gave some light-hearted predictions as to which candidates would make it and which would fall by the wayside. Four of the Final Five were predicted then, which is vaguely satisfying. However, with the interview process seemingly thrown out of the window and only two weeks of tasks left, a more thorough analysis is needed. I now have 1,000 words to review five candidates. In the words of Tom Baker from Little Britain… Let’s Do It!

In all probability, a large proportion of us thought Jim was the best thing to have happened to The Apprentice in a long time for the first few weeks. With apparently Jedi Mind Power qualities and a boyish charm that seemed irresistible to those of either sex, Jim started this contest as strongly as any other. However, toward the mid point things started going a bit wrong, getting Vincent to fall on his own sword was probably the start of a slightly worrying dip and incurring the wrath of Lord Sugar on numerous occasion left me thinking his time was numbered. This goes to show you should never underestimate the Irish and in the last two weeks the flair and brilliance has returned. Allying his biscuits to the Harry Potter film was inspired and getting praise from both Nick and Karen this week in regard to his selling shows that maybe he is peaking at the right moment. Jim is an intriguing character, watching The Final Five showed the drive and determination that he has. More over, it showed him out to be a thoroughly decent and (more importantly for me) romantic guy. He has charm, he has prowess and he is a man that will go far whatever happens.

From a personal viewpoint, Susan has always been my favourite candidate and I will defend her to everyone and anyone. She has got balls! There was a great moment at the end of the Free Magazine tasks when, after being ganged up on rather horribly by the boys, Lord Sugar reminded everyone that it was actually Bambi’s mother that got shot. Susan is clearly a fighter and obviously motivated. She is also an hilarious candidate due to her tendency to say the most ridiculous things which I’m sure need no citation here. Only Susan could try selling duvets door-to-door in Knightsbridge and then promptly fall asleep in a taxi. She has had her poor moments which are up there with the top ten cringe moments of all time but she has moments of genuine brilliance, such as the selling task in France and the negotiation task where she put on what I considered to be one of the best project manager performances this series. Her personal story was quite remarkable and rather touching and it is remarkable when you consider she is only 21. Other candidates have tried, and failed, to use her age to get rid of her, which quite frankly irritates me a great deal. From the ridiculous to the sublime, I hope she’s proved her doubters wrong.

The one who has won everything. Helen has been firing on all cylinders for a while now until she inevitably came crashing down in such a spectacular ways that she was comparable to a five year old who had just soiled her pants after she came out of the boardroom. In all honesty, I thought we were in for another Liz (if you remember the last series) moment where someone who broke all manner of records didn’t defend themselves properly and got booted off in controversial fashion. Yet Helen has survived and as hinted tonight, the coming week will show just how resilient those amazing cheekbones are. It was intriguing watching her story on The Final Five where we were told the story of a lawyer deciding she didn’t want to defend guilty people, going back to waitressing and becoming what was described rather alarmingly as a “bimbo”. Helen? The finely tuned businesswoman? Really? The programme also reminded me of her line at the start where she said that her personal life “does not matter”, which was rather robotic and not particularly endearing. Despite this, there was always something about Helen that made us sit up and watch, right from the very beginning. She has been a contestant to remember.

I still think Tom is immense. He is completely mental, like a spaniel wearing funny shoes. He rides a bicycle with a cool helmet. He nods and smiles in a way that I still maintain would make your mum drop wedding hints if you brought him home for dinner. He is clearly loved by other contestants. What is sad is how much he has lost and it remains to be seen the extent to which this is going to count against him in the coming fortnight. Lord Sugar doesn’t do patient but he has expended more of Tom than perhaps on any other candidate in Apprentice history and this makes me think he is still in with a fighting chance. This week was particularly pleasing for any Tom fans as he really did show he can go out of his comfort zone and sell. He did communicate his views to the team as he always has done, and I agree with him that the label of Mr Hindsight is a little unfair, he seems to have always had a knack for spotting the right thing (a bit like Susan) and if his other teammates want to act like goons and ignore him then that’s their business. Moreover, he really did fight in the boardroom for a change and showed some guile. His home story was quite interesting and out of the five, didn’t really reveal as much as the others in relation to his life outside business. Whatever happens, I still think the concept of an Emergency Biscuit was sheer genius.

I was quoted yesterday as saying that I would a variety of my own body parts if Natasha won and I sort of stand by that still. However, The Final Five did make me wonder just a tad if Natasha has been sometimes unfairly targeted throughout the process. I suggested that she should not quit her day job in my first review and I am perhaps guilty of the same dismissive attitude toward her that others have. It was highlighted that she has done things rather well, such as her advert and her win as project manager of the Free Magazine. Her personal story showed her to be the personification of gutsy and determined and I am now worried that there is one final fight in Natasha that will prove me wrong. Even with this, she has had some truly awful weeks, including the first few when she seemed to do nothing at all. This week she got it wrong on a massive scale and was only saved due to the Return of the Jim and a rather inspired punt from Susan to buy a shedload of random bracelets. As with Helen, it will be interesting (as Karen remarked) to see how she recovers from being the first project manager to win, receive an earful and then have their treat removed from them in the manner of a guilty puppy that’s just urinated on the kitchen floor. Despite all this, Natasha has done well to get where she is now and from this point on, anything is a bonus.