The Dream of the 90’s is Alive in ‘Portlandia’ 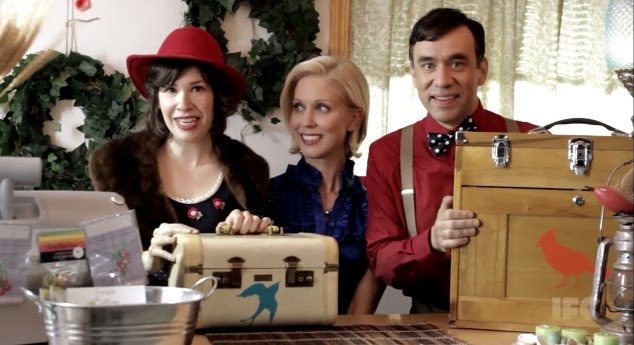 Portlandia: poking fun at self-satisfaction is the name of the game.

Welcome to Fred’s Armisen and Carrie Brownstein’s Portlandia: “a city where young people go to retire.” This is a city of fixie bikes, piercings and tattoos, of militantly feminist book stores, organic farms populated by cults, and music festivals that are so pretentious and insular they are impossible to gain access to. Through this show’s fixed attentions the alternative aura of Portland, Oregon is exaggerated into an absurd, hyper-liberalised, new-age utopia / nightmare. Hipsters get a fair bashing, as do twee artists and techno-addicts, but rather than a particular ‘type’, what the show aims to lampoon is the self-satisfied smugness shared by all of the above.

Sheer absurdity is the sketch-duo’s weapon of choice; character traits of the liberal ‘intelligentsia’ are blown up until they constitute a whole personality and then run into the ground through sheer ad-nauseam repetition in most cases. At times this works exceptionally well; take the protracted babbling of a diner concerned with the organic rearing of the chicken he is about to eat, or the overly-elaborate cautions of an extremely house-proud couple handing over their property to a house-sitter: “See these books…don’t ever open them…they’re not for reading…and those pears?…this is not a lie…they’re seven-hundred years old.”

The absurd tone of the show is well-suited considering the target it is critiquing: those who take themselves too seriously, whether it be the couple who turn a dog on a leash into a personal outrage project or the ultra blissed-out make-over artists who believe everything is better when you “put a bird on it!” These two examples serve as successful sketches, mainly because they bring Armisen and Brownstein’s social critique to the fore, for both involve twists suggesting the hypocrisy of these self-satisfied types. The canine-concerned couple leave in a huff at the close of the sketch, where it is revealed they have kept their own baby on leash on a street corner and in a similar reversal the bird-loving artists flip out when an actual bird flies into the shop, eventually killing it by launching a vase in its direction. Portlandia is at its best when delivering incisive social critique; demonstrating how hipsters or the socially righteous harbour the selfsame character traits that they rail against.

So, in order to critique the serious, Portlandia utilises the ludicrous. Though whilst absurdity definitely defines the high-moments of the show, it is also responsible for some of the show’s major downfalls. These are usually the moments where the social critique is either non-existent or merely a shallow premise. Take, for example, a sketch centring on a kitchen-based photo shoot. Yes, the cult of the TV-celeb-chef is ripe territory for satire (though not necessarily a fresh topic – I can’t count how many parodies of Nigella Lawson’s over-sexed culinary delivery I’ve seen) but here the quality of Portlandia really does degrade. As the duo progressively snort flour, pout whilst wearing various kitchen utensils and pour milk all over themselves, you’ve got to ask; what actually is this? Any element of satire collapses as the scene progresses in this vein for more than two minutes; instead you are literally just watching two comedic actors writhe around in food. This is not just an isolated incident that I am taking issue with here, it is representative of a least one (and that’s if you’re lucky) sketch per episode, where the content is simply not funny enough to be repeated ad nauseam. The show’s use of ludicrous repetition is really what makes the laugh-out-loud sketches and what breaks the weaker ones.

Essentially, what you are left with is a show that is worth watching for its fantastic peaks, but there is a fair amount of average/poor material to sift through. This is an inherent trait of sketch comedy, and I wouldn’t want to hold it against the show too drastically, in fact, the apparent lack of discernment in sketch quality is in keeping with Portlandia’s overwhelming ethos: don’t take yourself too seriously. At times, you get the impression that Armisen and Brownstein are just having fun, playing around with their own ideas whether they are comically viable or not. In a sense, if Portlandia were to deliver too pointed a hipster-critique (as Nathan Barley arguably did) it runs the risk of going against its ethos and becoming self-righteous in a manner akin to the characters it parodies. Instead, Portlandia casts its net of satire over quite a broad area, which whilst providing it with more targets to poke fun at, does dilute the content to a certain extent.

I’m not saying that Armisen and Brownstein should be aiming for out-and-out satirical invective (that would get old, fast) but the duo’s stronger sketches are those based on intelligent ridicule. Fair enough that the show branches out into physical comedy and farce at times, but the fact is that the pair just aren’t as good at scripting that type of material. The result is a mixed-bag, from which you get the impression that the duo will not (or indeed cannot) commit purely to their main strengths. The contradiction that arises then (which this article only fuels) is that Portlandia when reviewed or critiqued ends up coming off as rather average or flawed, but when chilling out and watching the show, its weaknesses can be forgiven and it is generally entertaining. Portlandia doesn’t take itself very seriously so neither should we; and in this context it can serve as a gentle and enjoyable form of social satire.