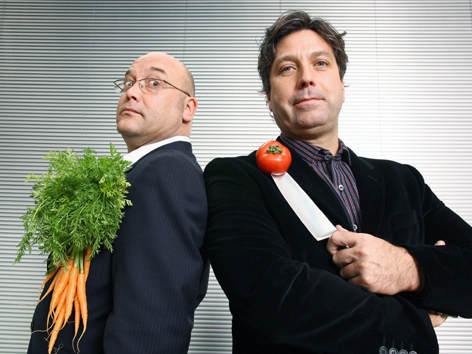 “Better than eating food whilst having sex. With Greg.”

Many things tend to get in the way. Some are annoying: condoms, food wrappers, etiquette, really long introductions before the meat of a review.

Speaking of meat, Masterchef had loads of the stuff. Apart from vegetarian Jackie, who made a solitary pork dumpling before she was duly knocked out. Once again, meat proves to be the vegetarian’s arch-nemesis.

Now let’s get this clear, we all know the elephant in the room is that Masterchef, by all observable metrics, ranks lower on the quality TV scale than the episode of Neighbours where a bunch of teenage boys peered over a fence to see into a girl’s shower (this actually happened, and I actually watched it, such was the drug-fuelled hedonism of my teenage years). However, this is no real revelation; on the contrary, this is the precise reason why millions of people watch it. It’s low-maintenance reality TV – unlike its sister programmes Strictly Come Dancing and X Factor (we will come back to the X Factor debate later), the average viewer/vegetable doesn’t even need to employ the basic motor movement required to pick up the phone and jab your hand into the receiver, like a bear searching for honey in an angry nest of bees.

Now it’s later; back to X Factor. We were all worried by the refurbished kitchen. And we were more worried by the fact that the applicants had to cook their food in front of all the other applicants, because our cynic senses kicked in and raised the crap reality TV threat to nuclear apocalypse levels. raises his concerns that in this particular series, the music has been ratcheted up to make you fill your pants with the sheer tension of baking a cake. That the pauses during tense end-of-episode decisions have been elongated to absurd levels and that the overall package is more reminiscent of X Factor (boo) than good ol’ Masterchef (yay).

Well, he’s right on the first two points, but then again – weren’t those already in Masterchef, in some embryonic form? Indeed, once we move past the first two episodes, which are rather startling in their attempt to emulate X-Factor/Britain’s Got Talent style audition rounds, we get a package that’s uniquely Masterchef in all aspects. The invention challenges, the mentors expecting crazy standards from what are, by all accounts, a group of random people off the street. Oh, and John and Greg lording over them like some perverted time-conscious puppet masters (Greg in particular, having a penchant for bellowing “ONLY 30 SECONDS LEFT”, and that unforgettable moment where the camera swoops into John’s cold, dead face as he yells “WHERE’S MY FOOD?” By the by mate, it’s probably being bloody cooked).

In fact, post-2 episodes, the series actually surpasses the expectations set by its previous format; we are able to observe genuine progression of the contestants, and while this inevitably entails us seeing a bit of their personality, it does not mean that it turns into the endless sob-stories that develop throughout other reality TV shows (apart from Jackie, who loses extremities at a rather alarming rate, amputating herself with gay abandon). There are obvious advantages to a refurbished kitchen; more cookers means less rounds, as opposed to endless appearances of Monica stating that the food simply isn’t up to the standards of Michelle Roux Jr, who would sooner vomit than eat a slightly overcooked fillet of twice-baked sole with a horseradish foam.

This means that the episodes are fundamentally more interesting, with taxis taking them everywhere, from posh people’s houses to old people’s houses and even to Australia, where they politely did not mention that quandongs sounds pretty hilarious.

Sara, during the series, proclaimed that for her, food was better than sex. For us, Masterchef is better than eating food whilst having sex. With Greg.