The Apprentice: A Look at the Candidates 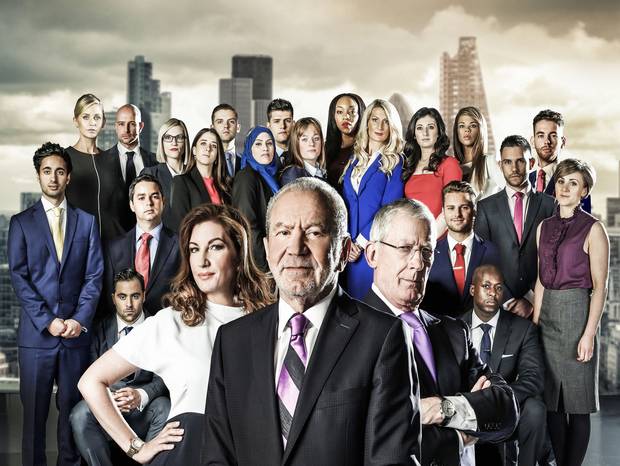 Lord Sugar, Nick Hewer and Karen Brady have a tough job this year sorting through a new bunch of sub-standard contestants.

Three episodes into this year’s series of ‘The Apprentice’, and the candidates are already providing us with the usual entertainment. Between privacy-invading-camera-jumpers and attempts to sell custard-coloured candles for £40+, this year looks set to fulfil the expectation that pretty much anyone could do a better job of the tasks set than those who made it onto the show. To help you follow the progress of this year’s bunch, I have taken note of their best moments so far, and have divided them into categories based on how well I think they might do.

Due to the addition of four extra candidates at the start of the series, in just 3 episodes there have been 5 contestants fired. The first to go was Chiles Cartwright (you may have heard his name as Charles, as I did for the duration of the episode). As leader of the subgroup, he was responsible for failing to collect the T-shirts which they had printed the insightful phrase ‘Buy This T-Shirt’ on. He fully deserved to go – who doesn’t collect the goods which you have to sell to win? Episode two saw another two of the boys go; first, Robert Goodwin, who foolishly ignored Lord Sugar’s direct request that he be project manager for the boys and irritated everyone with his hipster hotdogs. His firing was thrilling, being the first candidate I can remember who didn’t even make it into the café before being fired. But Lord Sugar was angry, and proceeded to fire a second candidate, the scot Scott McCulloch, whose brave assertion that he was a mix between Ghandi and the Wolf of Wall Street was one of the most ridiculous opening statements ever uttered. Episode three saw another first in Apprentice history, with Lindsay Booth literally talking Lord Sugar into firing her, saying, “I’ve not done very well – I’m disappointed in myself.” A new all-time low in candidate choice, even she realised she was totally useless. But again, Lord Sugar wasn’t satisfied with removing just one fool from the process, and fired Nurun Ahmed, who really contributed nothing to the tasks except some weak project managing in the previous episode.

Removing five candidates in three episodes really doesn’t give an indication of how weak this year’s selection is. Roisin Hogan, who project managed the losing team in the most recent episode, has featured minimally aside from this recent responsibility. She showed a lack of business skill when she sold most of her stock at a mere £8.50 per unit, not negotiating at all to get a better price. However, in terms of entertainment, she features much higher than Sarah Dales, probably one of the most frustrating candidates I have witnessed. Her assertion in the first episode that “more people will buy from females because they are more attractive” was equally worrying and ridiculous, while her obsession with lemons had now come up in two separate tasks. Despite coming across as annoying or incapable, at least these two have contributed something to the show. Bianca Miller had a short rant about Sarah in episode one, Lauren Riley noted that the jacket design in episode two was trying to do too much, while Jemma Bird and Pamela Uddin have genuinely done nothing. It is really only a matter of time until these candidates who do nothing are eliminated.

Among the boys there hasn’t been the same level of invisible candidates, however, Felipe Alviar-Baquero, James Hill and Steven Ugoalah have all shown weaknesses and are unlikely to remain in the process for much longer. Felipe managed the first task, showing some level of courage. However, he was lucky to avoid firing, with Lord Sugar noting that his managerial skills were weak. Since then he has hardly featured, apart from making the widely-held assertion that “the customer is always right” when there was a complaint in episode three that the labels weren’t straight on the reed diffusers. James Hill looked promising as a sales man, and has been a fairly strong character from the start. However, his sales skills were cast into doubt in episode three, as he sold candles at ridiculously low prices, with Lord Sugar commenting that anyone can sell something at half the value it is worth, while his incessant talking had the audience will Lord Sugar to go crazy and fire a third candidate in one week. Steven Ugoalah has provided good entertainment, bringing sass to the show. However, he narrowly avoided being brought into the boardroom in episode one, claiming to be a “scapegoat” for the failure of the task, and has since continued to be sassy, but hasn’t really contributed very much at all.

The boys have definitely fared better than the girls overall, but two girls, Katie Bulmer-Cooke and Ella Jade Bitton, have done better than the others. Ella hasn’t featured a huge amount, but she successfully sold scented candles to a nightclub who were evidently uninterested initially, but were won over in her negotiations. Katie Bulmer-Cooke project managed the winning team on the most recent task, realising the importance of profit margins. Despite not selling all of their stock, they won by a small £14, and Lord Sugar noted that had this been a real business, their focus on margins would have made them very successful.

Among the boys there have been four who have impressed me more than the others. Daniel Lassman, director of a pub quiz company, has apparent leadership capacity, saying in episode one, “I was listened to, and that’s what’s going to happen in this competition.” His sales in episode one were reasonably good, although his lapse in episode two of saying that he wouldn’t wear his own product in a public place and subsequent appearance in the final three in the boardroom, gave rise to some doubt over his ability. Sanjay Sood-Smith hasn’t featured a huge amount thus far, but he did impress the other candidates with his Maths in this week’s episode. He hasn’t been offensive and seems logical enough to go far. Mark Wright has made himself noticed with his beautiful Australian accent and honest comments on the other candidates. His self-confidence is also apparent, having asserted that he knew his team would sell with James in the market and him selling to businesses. He seems capable of being a good project manager, and I think he is likely to shine through as a likely winner over the next few weeks. The other candidate I view as a possible winner is Solomon Akhtar, with his technological business focus. He has performed as well as any other candidate over the past three episodes, but seems to have a good personality and a business plan that is likely to appeal to Lord Sugar.

Perhaps hidden skills will emerge over the next few weeks, but as an initial reaction, this year’s candidates seem even more incapable than usual. As an entertainment show, this series looks set to be excellent, but in terms of helping Lord Sugar to find someone worth investing £250,000 in, I wouldn’t blame him if he fired them all and bought a new car.