South Park – All Grown Up? 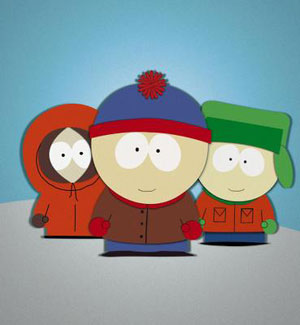 One of the greatest sitcoms of all times?

The first half of the fifteenth season of South Park drew to a close in the United States on Wednesday evening. The show, born out of two crude animated shorts, is frequently named among the top TV shows of all time and often takes a very respectable 2nd position in a list of top cartoons ever. The show, known for its very dark, satirical brand of toilet humour, took on a very different tone as the show went on annual hiatus until the fall.

I’ve been a fan of the show since it originally hit C4 in 1998. I was about nine years old at the time and the show was first aired on Channel 4. It was on late, contained puerile humour and my parents hated it. What more could you want? I remember it being a hit with almost everyone my age (despite the rating certificate) and if you liked The Simpsons over South Park you were officially uncool (or more likely “gay”). And yet, as the show went on its popularity seemed to dwindle. I watched up until season three, when I obviously became far too mature to spend my time watching variations on poop jokes every week. This, it seemed, was the general trend. The show lost popularity and was eventually (after season four) pulled from Channel 4. Despite remaining as Comedy Central’s flagship show to this day, even in the US, it has never been able to achieve the kind of ratings it reached in its earlier days.

I rediscovered the show a few years later, somewhere in the sixth or seventh season in a late night slot somewhere on Sky (Paramount I think). Almost immediately it seemed to be a different show entirely, where before I took all of the jokes at face value and “Oh my god, they killed Kenny” was the defining point of the show (I think early on I was quite angry when it was missed out from an episode!), I now saw a much deeper, smarter and more cynical show. I fell in love with it all over again. Though, hopefully, this time for the right reasons.

Despite all pretensions surrounding a cartoon series, it cannot be denied that South Park is a work of satirical genius. It is most accurately described (at its best) as a cutting social commentary and a political mouthpiece for the shows creators Matt Stone and Trey Parker. Over the years they’ve targeted such a wide range of things (there’s a list somewhere on Wikipedia) that anyone would surely conclude that their moral compass is all over the place. However, it’s exactly that, their uncompromising attitude to who or what they decide to satirise, taking aim at everything imaginable, that ultimately lets them get away with it. They’ve tackled a number of issues over the years, from censorship, to abortion, religion (particularly Catholicism and Scientology) and Family Guy, each with intelligence and humour.

Skip forward to season 15 and what we have is a TV show widely regarded as an absolute classic with a solid fan-base who avidly await the latest pop-culture skewering from Matt and Trey each week. It’s a multi-million dollar franchise, with a critically and commercially successful film and lots of merchandise. However, read any message board (most notably IMDB) and quickly it is evident that the consensus is, much like The Simpsons, that the show should probably be laid to rest. It seems with each passing season the pair care less and less and at times seem to churn out episodes with very little thought or effort. Fans react each week (sometimes angrily) with comparisons to what the show used to be and complaints of lazy writing and in extreme cases even plagiarism. This continuing trend has reached an all time high with the most recent half-season, with the pair actually confessing in a number of interviews that they’re almost done with it. They are bored and fed up. Who can blame them? Entering middle age with one of the most successful cartoons of all time, which began as a college project when they were a young, ambitious, anti-establishment pair who (in their words) just wanted to get laid. Now they have to try and continue to meet the unreasonably high standards set by the golden years of a once fresh show which they’ve clearly lost interest in, all while balancing other projects (such as their Broadway hit, The Book of Mormon). The two are now both in their early 40’s, one is married and the other with a long term girlfriend and are seemingly ready to call it quits on the franchise that made their names.

All this boredom and frustration was made manifest in the mid-season finale this week. The episode, “You’re Getting Old”, acted as a direct metaphor for how the pair feel about the show. The episode focused on one of the shows principle characters, Stan Marsh, turning 10 years old. And with that a coming of age, everything he enjoyed in his younger years begins to look and sound like crap. Clearly, his tastes are changing and maturing as he enters his second decade. However, the catch is, the culture he is expected to mature into also looks like crap and he is diagnosed as a cynic. Meanwhile, a more recent addition to the (already large) list of classic characters, Randy Marsh (Stan’s dad), attempts to recapture his youth by deluding himself into thinking he likes and can be a part of the youth culture, despite it clearly sounding like crap to him. In true South Park style (the humour hasn’t all gone from the episode), this was all dealt with in a very literal manner, showing once again that there is creativity to be had out of toilet humour. So far, typical South Park right? Take an idea, add some gross humour to it, put a surreal spin on it and see what happens, right?

Wrong, the storyline was just a set-up for Matt & Trey to get across their own feelings about the show. Telling us that they’ve matured and moved on from the show, the style and humour that they used to take pleasure in has become a chore. What resulted was the truest and most reflective that South Park has ever been, the duo were really speaking to the audience in this episode and they clearly want out. The final scenes witnessed the breakup of Stan’s parents and a montage (set to the only song in the episode not to sound like crap – Stevie Nicks’ Landslide) of Stan’s misery, his parents splitting and old rivals becoming friends were the saddest scenes South Park has ever seen. This was all capped off with a fade to black of Stan lying in bed, with no end theme tune. The clearest and most poignant example of how the pair feel was through the final dialogue between Stan’s parents, an argument about their failing marriage, feelings of repetition and boredom both are served as a direct parallel to the show itself. A mature ending to a show, which until now, had played everything for laughs.

IMDB and Twitter have been ablaze with theories and interpretations of the episode. Almost all with the common theme of endings. It’s worth pointing out that a few have noted that this may all be one big practical joke, which wouldn’t be unknown in the South Park universe, but this time they seem genuine about their point. Matt & Trey are contracted to see South Park run until 2013 and have the remaining seven episodes of season 15 to complete, so it will be interesting to see where they take it, but it wouldn’t come as a surprise to anybody if they cut their contract short of the remaining few years.

For me “You’re Getting Old” was the best episode they’ve put out in years. It is clearly one aimed entirely at the devout fans of South Park, echoing the frustrations with the show that both fans and the creators have been feeling in recent years and yet, ironically, it seems to have breathed new life into the show once again. I’ll be honest, I’ve been on the verge of quitting the show entirely with some of the poorer episodes in the recent years, but this episode has ensured I’ll be hooked until the end. If nothing else, it has shown that Matt & Trey are still capable of bringing surprises into this, now veteran, TV series.

Whatever the outcome I hope Matt and Trey can look back proudly on one of the greatest sitcoms of all times.