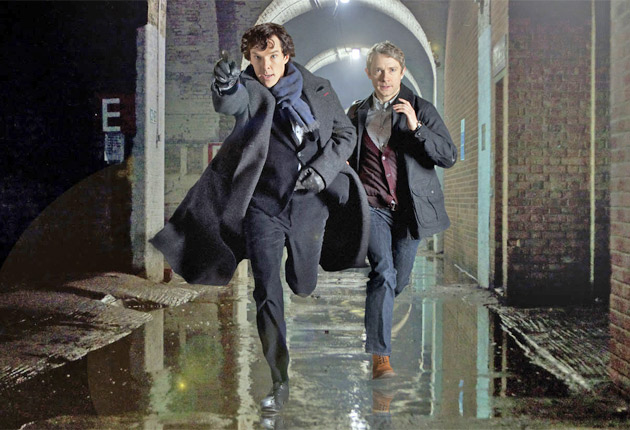 Benedict Cumberbatch. What a name. It sounds like a benevolent uncle from a Dickens novel. And his aquiline profile and proud stare are everywhere at the moment. Warhorse, Tinker Tailor Soldier Spy, The Hobbit – and that’s just the big-name stuff. Let’s face it; he has the perfect name, haughty demeanour and cheekbones to play a modern-day Sherlock Holmes. In the first mini-series, he adeptly wowed us with his portrayal of the aloof detective-genius. In the second, he’s nailed it again.

Of course, a lot of the credit goes to the writers, led by Steven Moffat, who all SF geeks like me revere for revitalizing Doctor Who in series five, and also slightly hate for then ruining it in series six. As the huge critical acclaim and eight-and-a-half million viewers attest, he hasn’t made the same mistake with Sherlock. His signature style has once again brought energy and a quirky edge to his reworking of Sir Arthur Conan-Doyle’s masterpiece. As the Guardian review noted, there is (unsurprisingly) something of Doctor Who about the programme and its hero. This is particularly noticeable when you look at the main promotional photograph: a long-coated figure walking towards the camera with piercing stare, devoted companion following close behind… sound familiar?

But the two other writers – Mark Gatiss and Steve Thompson – have brought their own pinches of magic to the series as well. Gatiss is particularly good at the idiosyncratic touches to character, like Sherlock’s “mind-palace,” which was supported by some fantastic directing in his thought sequences – modelled on computer processes, as he calls up words and images to his mind’s eye, and quickly flicks through them, ipad touch-screen style. Likewise, Thompson kept us all on the edge of our sofas in the stunning finale. Unfortunately, having watched it for the first time on iplayer a few days after its original airing, I was unable to avoid hearing a few too many hints about the detective’s fate. But it’s not particularly surprising; the “Reichenbach Falls” of the episode’s title are where Holmes apparently dies in the original Sir ACD story… only to then re-appear elsewhere, of course. What impressed me was the way they handled the death. Martin Freeman’s graveside speech was an absolute tearjerker – for a moment I genuinely believed his best friend wouldn’t be coming back, and grieved with him. I did feel the actual ending was perhaps just a touch lazy, though. The supposedly dead hero is watching from behind a tree. No hints, no clues, no tantalizing details, not even a note, or a mysterious figure with him. But then, I probably missed something – I’m not the most observant of types.

Unsurprisingly, the debate about how Sherlock survived has been raging away on the Internet. What did he ask Molly to do for him? Perhaps procure a corpse from the hospital to throw off the roof or replace him after the fall? Is Moriarty really dead? Why did Sherlock make John watch the fall from a particular spot? Does the distraction of the cyclist hitting John have anything to do with it? Was his faked death deliberate in order to avoid the mounting media attention? In an interview, Moffat claimed that we’ve all missed a vital clue – though of course was closed-mouthed about what exactly that clue was. However they do it in the next series, the writers have a big task to make his survival convincing. Let’s hope they pull it off.

However, it’s not quite all sunshine and roses, or maybe violins and heroine, in this case. There are a few threads to unpick. First of all, I loved the character of crafty dominatrix Irene Adler, or “The Woman.” The first episode in general had some very funny moments, particularly when getting a bit too close to examining Sherlock’s sexuality. But the ending was utterly disappointing. In the original story, A Scandal in Bohemia, she is the only person ever to have truly outwitted Holmes, as she sees through his disguise in time to make her escape with compromising photographs of a member of royalty. In the first episode they re-vamped this idea, entangling it with international politics and terrorism, and she manipulates Sherlock skillfully, always staying one step ahead of the game. But then he eventually gets the better of her, as he realizes she has fallen in love with him and used his name as the code for her phone, which contains all the compromising information. A powerful woman ends up victim to her emotions, given away by her racing heart. How original. It would be nice to get away from these sorts of decaying gender stereotypes. What makes it particularly cringe-worthy is that it’s actually a step backwards from the original – Sir ACD could see the potential for powerful, rational women, and yet Moffat chose to revert to a frankly insulting gender divide. And to add further insult to injury, a few months later Sherlock rescues Adler from execution. A knight in shining deerstalker and popped collar.

Feminist rant aside, I felt the second episode also lacked something. It was a great idea for a technological-based reworking of the most famous Holmes story, with mysteriously secret research centres, hallucinogenics and chemical minefields. Fears about GM experiments fuelled the Hound myth, rather than belief in demi-mystical monsters. And yet it needed something extra – perhaps a tweak in the pace, or some more empathetic insight into the psychology of Henry Knight, rather than just shock-tactic nightmare sequences.

Apart from these criticisms – and really very minor ones – I once again fell in love with the quick-witted and arrogant sleuth, and his endearingly pragmatic sidekick. The Conan-Doyle stories seem to have captured the current public imagination – the success of the recent films starring Robert Downey Jr. and Jude Law are a testament to this. Let’s hope Moffat isn’t as reluctant to write a new series as Sherlock was to wear THAT hat…