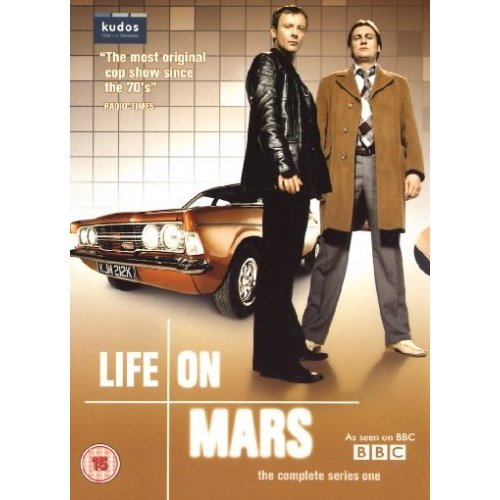 One of Kudos’ most famous shows

I’ve recently had the chance to spend two weeks as a runner at Kudos Film & TV Ltd, the UK’s most successful producer of award-winning TV series, which also turned to film production in 2004. The two most famous shows that the company produced are probably Life on Mars and Spooks. Life on Mars is a science fiction drama, which was broadcast on BBC One between January 2006 and April 2007. It follows Sam Tyler, a police officer in Manchester who has a car accident in 2006 and wakes up in 1973, facing unimaginable cultural differences, notably in terms of racism and feminism. He also tries to understand the reason of his time-travel: is he dead, in a coma, or actually in the past? The show was extremely successful – so much so that, in the US, ABC produced a remake a few years later. Spooks is another award-winning programme, broadcast since 2002 on BBC One, and now reaching its tenth season. It portrays the work of MI5 officers, and has been successfully exported, notably to the United States and France.

However, as a runner, my job was not to participate in such momentous programmes, but rather to make sure that the four-storey office building was run smoothly, mostly by making tea (and even coffee for some heretics). Yet I can safely declare that these two weeks were the best tea-making experience I ever had. The team of intern runners – employed for six months – were very welcoming and friendly, and, most importantly, being a runner is a great opportunity to meet and talk to some people you admire in the film and TV industry.

For instance, Stephen Garrett, who co-founded Kudos in 1992 and is now the company’s executive chairman; or Jane Featherstone, now creative director, who produced her first programme for Stephen when she was 25! I’ve got to admit that Paul Webster, head of film, particularly impressed me. He joined Kudos in 2004 to create the film branch of the company, bringing us Eastern Promises (2007) and Miss Pettigrew Lives for a Day (2008). Paul started literally at the bottom thirty years ago, working as a despatch clerk in a basement office beneath the Gate Cinema. After ten years in distribution, he eventually worked on several Working Title films, then produced Good Will Hunting and The English Patient for Miramax, until he created Film Four in 1998, winning too many awards to be listed here. I guess my point is that if you want to work in the film or TV industry, being a runner is certainly a good place to start, if only because between two cups of tea Paul Webster (or whoever else you admire) might give you life-changing advice about your future.

Another chance when learning more about “the bigwigs” is that you realise they all took different paths and that it was not easy for any of them. Simon Crawford Collins and Daniel Isaacs, today joint Managing Directors, respectively started by working in the City, and as an actor / dentist. Most execs have a degree but it is rarely related to their career in film or TV. For instance Stephen Garrett studied Jurisprudence and Simon Crawford Collins studied Modern History, though both attended Oxford. All in all, I felt that meeting those who made it was quite compelling: in the film and TV industry there are no patterns, no established routes. This can be either quite frightening, or else quite encouraging…

Running at Kudos also made me realise how fundamentally different the film and TV industries are in terms of pre- and post-production. Indeed, when you watch a series, or have the chance to attend a shooting, the two industries do not seem that different, especially when considering the high production value of series recently. However, those two industries diverge in terms of how they are produced and distributed. On the one hand, series are commissioned by broadcasters (like the BBC) who invest their money in a project that they know they want to air. Hence, once the project is commissioned, a lot of the pressure is alleviated. Films, on the other hand, have to find investors willing to take a big risk when putting their money in a project that is sometimes not even certain to be released, even less to be a success. The pressure remains up until the DVD release, which is often more profitable than the theatrical release. Television therefore seems much safer, even though, to a certain extent, creativity might be more restrained than in the film industry because of the broadcaster’s strong influence.

During my second week at Kudos, I got the chance to cover for the receptionist who was on sick leave. This is quite a stressful task, even more so when you have a pretty strong French accent and everyone calling therefore thinks they dialled a wrong number. Yet, it was also very interesting to realise the amount of calls that such a big company receives, from world-class journalists to crazy fans. I had a call from a middle-aged American man who was very worried because he was not sure that the series M. I. High (BBC) was to be continued. M. I. High tells the story of a gang of school kids who are all junior spies. Ignoring the fact that he was clearly not in the target audience, I made a few calls trying to find the answer but, unfortunately, I was not allowed to tell him and had to leave him in his misery. Other calls were much more manageable and I didn’t have to handle such personal tragedies again.

In any case, a lot of calls regarded Kudos’ new production The Hour, which, I was glad to learn, has its own reception. The Hour is a six-part drama about a love-triangle that unravels behind the scenes of the BBC in 1956. It stars Romola Garai as the young and ambitious Bel, and Dominic West and Ben Whishaw as her rivals. Having had the chance to shadow the First Assistant Director and his team on my last day at Kudos, I’ve got to say that it looks stunning. In the vein of Mad Men, it promises a good combination of drama and historical accuracy in its depiction of epochal cultural transformations. It will surely be another of Kudos’ successes.