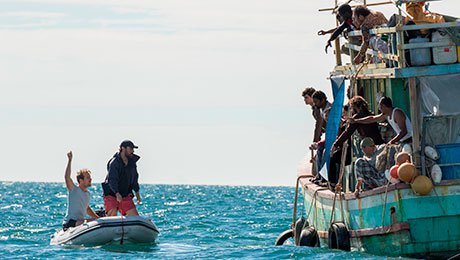 A highly topical and morally riveting drama depicting the collision between Australian friends holidaying on a sailing yacht and a teeming migrant boat with a dead engine in international waters. The chance encounter forces the Australian friends to make a morally hazardous decision with deadly consequences.

Years later, secure in the privilege of a glittering neighbourhood, the group of Aussies who had been holidaying aboard the yacht are confronted with a living ghost. One of the asylum seekers who had been aboard the stranded boat appears outside their house. Now working as a taxi driver, the encounter is ostensibly a moment of serendipity. With an uncomfortable firmness and a barely concealed guilt the Australian captain of the yacht invites the unwilling and evasive Ismail and his family to a BBQ. Here the couples aboard the yacht are reunited with the family aboard the migrant ship.

The pretence that this is a meeting of equals, makes the whole scene profoundly uncomfortable. The performance of social niceties, small talk and construed smiles juxtaposed with the gravity of the meeting, build to create a delicious tension simpering in the domestic everyday scene of an Aussie BBQ. With benevolent and patronizing smiles the Australians assure the asylum seekers that whatever they need, they are more than happy to help with. But is this a case of too little, far too late?

While the unique and highly topical premise of ‘Safe Harbour’ is what makes the program so brilliant, the drama loses momentum as it descends into a conventional thriller as the series progresses. Moving from an unusually thoughtful moral quagmire to a tired revenge drama replete with overused tropes. Nevertheless, Ewen Leslie puts in brilliant turn as Ryan Gallagher, the conflicted captain of the Australian Yacht, reprising the role of the distraught father, which he played so well in ‘The Cry’.