Review of The Child in Time

The Child in Time is an acting masterclass and an utterly stunning piece of television. Stephen Butchard’s adaptation of the Ian McEwan novel is not only raw and deeply moving but seriously thought provoking, exploring notions of childhood and a childhood lost.

The changing dynamic between Stephen and Julie (Benedict Cumberbatch and Kelly Macdonald), following the disappearance of their 4-year-old daughter, is central to the programme’s success. The deterioration and rebuilding of their relationship makes for a mesmerising watch, as a mixture of complex emotions surface throughout. Guilt, blame, anger, frustration, and despair name but a few, performed to a first-class standard by Cumberbatch and Macdonald.

Both Stephen and Julie try to fashion an imitation of life apart from one another. It becomes clear though, that the pair are inextricably bound by their tragedy and precious memories of their daughter Kate. It was refreshing to watch a drama that explored the trauma of a missing child without the intricacies of police detectives and investigations. Instead, The Child in Time focusses on the human emotions of Stephen and Julie, who face the impossible struggle of accepting their daughter is gone.

A particularly heart-wrenching scene, performed sublimely by Cumberbatch, occurs when his character mistakes a passing school girl for his lost child. He weeps bitterly upon realising the girl isn’t Kate, as the hopelessness of his situation resurfaces.

As a sub-plot to Stephen battling the loss of his daughter, his best friend Charles belatedly struggles with his own fractured childhood. Stephen Campbell Moore’s performance of Charles is fascinatingly engaging. Viewing through Stephen’s eyes, we initially experience a conflict between Stephen’s incredible personal loss and what appears to be Charles’ midlife crisis; a self-indulgent grown man gallivanting around the woods like a school boy. As events unfold, however, we see that Charles isn’t ‘comparing’ his predicament to Stephen’s; his mental illness, possibly the result of a repressed upbringing, plays out in an unabandoned regression to childhood.

Charles sees his only release in embracing the ‘honesty and purity’ of youth. One of the final scenes, in which Campbell Moore acts out an imaginary battle scene, moving with boundless energy and melodrama across the clearing, reminds us of childhood’s innocence. Whilst this is inevitably lost at some point, the true heartbreak of The Child in Time lies in the fact it is taken from Stephen and Julie’s family so prematurely and abruptly.

The storyline left me believing in not only the unconditional love between parent and child but the possibility of there being a deeper, spiritual bond. Stephen talking to Kate via the walkie-talkie he takes from her pile of unopened Christmas presents is an incredibly emotional moment; the viewer is drawn in to almost expect a response from Kate, despite the futility of the situation.

If you only watch one drama this year, please watch The Child in Time. With exceptional writing and actors at the top of their game, to describe it as utterly brilliant whilst not making easy viewing explains how it pulls us into a heart-breaking yet ultimately uplifting story – its sentiments will certainly stay with you long after you’ve finished watching. 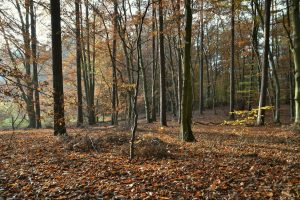