Preparing for Bloodshed in ‘Boardwalk Empire’ 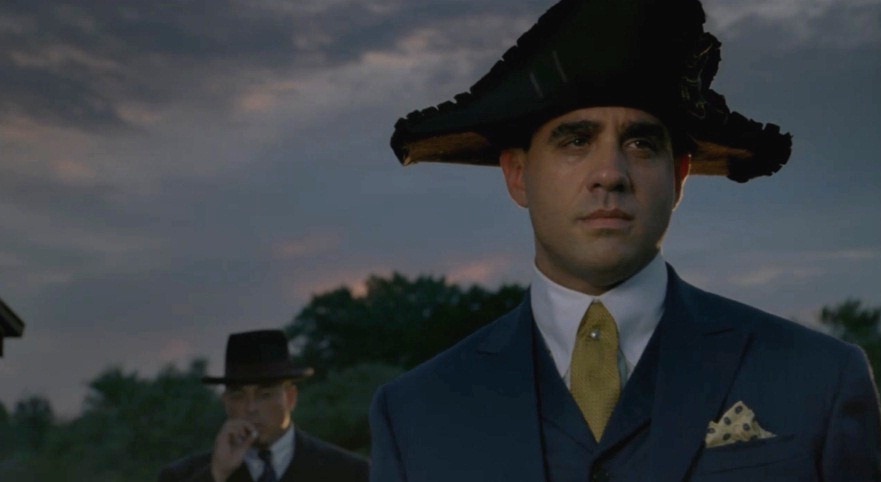 Boardwalk Empire, for all its technical seamlessness and glossy production, is frequently described to me by others as having a strange void at the heart of it. Yes, the performances are phenomenal in most cases, but the characters fail to completely connect. Other accusations include that it hums along at a piddling pace before suddenly, and somewhat unrewardingly, erupting into OTT violence. It is hard to counter this accusation after the latest episode (S03E10) consisted mainly of characters’ to-and-fro deliberations, until abruptly an overreaching crony of Gyp Rossetti was buried in sand and brutally decapitated with a shovel.

The reason that I want to talk about deliberation and action at this point in Boardwalk’s run, is that the tipping point has just been reached. Two episodes remain of its third season, and it has become the convention recently for big-budget shows to pack their grand reveals into the penultimate episode. Just think of Game of Thrones, Treme or The Wire: shows that aim for end-of-season resolutions rather than cliffhangers tend to deliver the blow one episode early and dedicate the last to picking up the pieces. This pattern was certainly adhered to by Boardwalk’s first season, although the second just continued escalating. Whilst episode 10 was shockingly rounded off by Angela’s murder, episode 11 revealed unspeakable truths regarding Jimmy (leading to further murder) and the finale delivered the coup-de-grace, with Nucky fully stepping into the gangster role and taking up arms himself. Well, this week’s episode also rounded off with the death of a major character…which can only spell the start of a similar landslide.

Much has been set-up over the last couple of episodes: Gyp Rossetti, who carries the air of a ‘one-season’ nemesis, has been steadily accumulating power in Tabor Heights, even donning Napoleonic headwear in a symbolic cementing of his position. Control over the police, the local populace and an alliance with Joe Masseria place him in a fully-stocked position to declare all-out war on Nucky. In fact, this week’s episode had nothing but a secondary plotline for Gyp: having accidentally lost an alcohol shipment, Mr. Rossetti takes out his rage on someone he perceives to have stepped out of line. If you didn’t get that Gyp is prone to irrational violent outbreaks by now, then you must have been watching with eyes closed and ears stuffed with cotton wool.

Donning an admiral’s hat and heading off to war, that would an audience-rousing move. Yet, the writers have Nucky’s nemesis tread water, rehashing past behaviour. The only reason that this seems feasible on the part of the writers is that something bigger is building, and other major plot elements need to lock into place. This may have been Luciano and Lansky’s deal with Masseria, or perhaps Nucky needed to receive his special 4am delivery, spurning him to rush into battle irrationally early. In either case, the odds seem tantalisingly stacked against Atlantic City.

This week’s episode also saw Nucky sending off his various messengers: to curry the favour of Torrio in Chicago, to jump-start a new distillery and, what I imagine will be his most important move, planting a mole inside Rossetti’s ranks. How the season finale will play out larges hinges on the outcome of these three missions, the latter of which appears to have been successful thus far. Nucky is more of a guileful tactician than a military general, and if he concentrates on intelligence in the upcoming clash, the old treasurer should come out on top. However, Nucky’s increasing rashness this season also opens up the possibility of him amassing Torrio’s men and opting to use brute force. Against Rossetti and Masseria’s superior numbers and general ruthlessness, this path provides less optimistic outcomes for Nucky, who only last season was still regarded as “half a gangster.”

Whether Nucky will be going to war with a measured, resolute mind or an irrational, hasty one should also be determined relatively early on in next week’s episode. In my mind, it amounts to a simple equation: is Nucky’s loyalty to Owen Slater strong enough that his death will spurn him to vengeful action, or will the intimations that Margaret was having an affair with Owen break him down, forcing him to act out of wounded pride?

Of course, this article is mainly just deliberation, but that is what Boardwalk Empire is inviting at this point in time. Questions are manifold and many elements hang in the balance. Over the next two weeks we shall be dealing mainly with actions, and most probably, some notable characters will be removed from the equation. Judging by its renewal for a fourth season, Nucky will most likely be left standing. But in what condition? Will Gyp be sticking around for season four? And will Nucky have lumbered himself with an unfavourable alliance in the process? Or maybe, just maybe, Nucky will end up with a bigger slice of the pie than he ever expected…