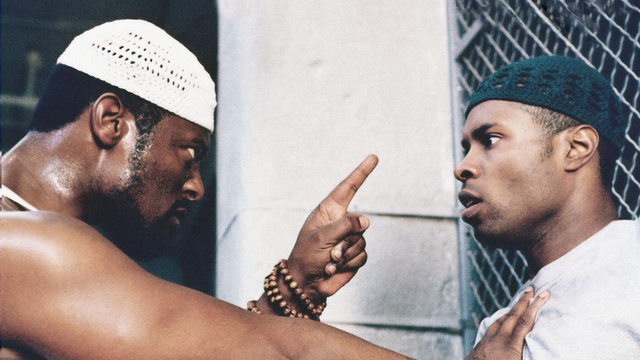 “Oz: That’s the word on the street for the Oswald Maximum Security Penitentiary.”

My first advice when watching this show is not to watch it half an hour before you go see a production of the musical Wicked in Victoria. Whilst the names of ‘Oz’ and ‘The Emerald City’ might have conjured up fantastical images of wizards, magic and yellow brick roads for the rest of the audience, for me these words merely invoked scenes of prison riots and gang rape in my mind’s eye, accompanied by the fading sound of a bongo drum.

HBO’s first ever one-hour drama, Oz, a brutal depiction of life inside a fictitious State Correctional Facility, paved the way for a flurry of hugely successful shows including The Wire, The Sopranos and Six Feet Under. No, Oz is not a combination of all three (although the idea of an Italian-American family of undertakers solving crimes/selling drugs in Baltimore does sound fantastic). Instead, it was Oz’s no holds barred attitude towards the portrayal of violence, profanity and homosexuality that helped create a variety of programming that concentrates on the quality and accuracy of production rather than worry about the commercial gains of presenting an aesthetically pleasing yet diluted show. Watered down, it is not. Think of anything immoral in life, Oz has it: murder, rape, the drug trade, capital punishment, abortion, extortion and even a highly controversial game of checkers are just a few themes populating the series that set the tone with regards to feature length dramas.

Events in Oz concentrate on an experimental unit within the prison, Emerald City. This unit, run by Tim McManus (Terry Kinney), is designed to give prisoners more freedom than they normally would have in an attempt to focus on the rehabilitation of inmates rather than solely punishing them. Oz starts to raise questions about the role of prisons in our society. Is a prison’s primary function to castigate offenders so harshly that they never consider committing a crime again, or does it also have a responsibility to work as an institution of personality redevelopment? Most of the prisoners in Oz come from poor backgrounds and have had very little education. McManus, the self-righteous idealist, attempts to deal with this problem directly by introducing a schooling programme in order to educate the inmates. His hope is that this will help the ones who make bail (or complete their sentence) find jobs when they are released and will be able integrate back into society successfully.

One character whose reasons for incarceration cannot be attributed to an underprivileged background is Tobias Beecher (Lee Tergesen). Before being sentenced to Oz for vehicular manslaughter and driving while intoxicated, Tobias was a successful attorney who graduated from Harvard Law School, hardly the stereotypical backdrop of a prisoner in a maximum-security facility. Due to his background and his lack of experience of prison behaviour, Tobias is the most relatable character. In fact, I would even go as far as to say that Tobias Beecher is the audience. The first episode is Tobias’ first day in Oz, meaning that everything that is new to us is new to him. We share all of Tobias’ feelings of fear and intimidation, especially when he meets the head of The Aryan Brotherhood and his nemesis-to-be, Vernon Schillinger (J. K. Simmons). Tobias’ personality development throughout his time in Oz is fuelled by his extremely unhealthy relationship with Schillinger. Initially we see a very passive, scared Tobias who feels he has to fulfil his duties as Schillinger’s ‘prag’ in order to survive, yet the bullying torture that he suffers (getting the Swastika tattooed on his buttocks, being raped and being forced to eat pages of a law book are just a few examples) eventually provokes him to lash out (in a particularly messy way) at Schillinger and we see an altogether different Tobias than the one we saw in the first episode. Life in Oz has corrupted him, just like it has the audience. By the end of season one, we are no longer as horrified by the goings on in Oz and, like Tobias, we feel hardened by the experience. It is also telling that Tobias himself doesn’t think that Oz changed him; he just “became the man he always was and never knew.” The Beecher-Schillinger rivalry is probably the most gripping of all the storylines in Oz, especially when they start to involve people from outside the prison, and it is the only one that lasts throughout the whole six seasons.

The idea of the audience being a prisoner is emphasised by the fact that there is only ever one scene, aside from flashbacks, that is set outside of the prison. Director Tom Fontana also deliberately designed the set so we never saw the sky so as to accentuate the trapped feeling that the prisoners feel, “I wanted there to be a kind of pressure on the audience visually…I wanted the audience to feel as sat on as the prisoners felt.” Whilst the scenes of criminals committing vile acts horrify us, Fontana also very cleverly provokes feelings of empathy towards these criminals. What would a life sentence in a building filled with murderers and rapists do to you?

So if you’re on the lookout for a TV show that will put you off going to prison FOREVER then Oz is the choice for you. The quality of acting by certain characters, J. K. Simmons excellent portrayal of Vernon Schillinger and Eamonn Walker’s role as the Muslim spiritual leader, Karim Saïd in particular, help create a realistic image of life behind bars. Perhaps my favourite aspect of watching Oz was how it kept making me change my mind as to which prison gang I would want to be a part of and I am curious as to which one you will choose: the wise guys, the home boys or the Latinos, Oz is your oyster. With its changes in plotlines and character affiliations; Oz is basically an extreme version of a soap opera, whilst it is not as precise or deep as something like The Wire, its hard-hitting, uncensored depiction of taboo subjects opened the doors for these shows and its influence on subsequent programming cannot be understated.