One Last Peep: The Final Series of Peep Show 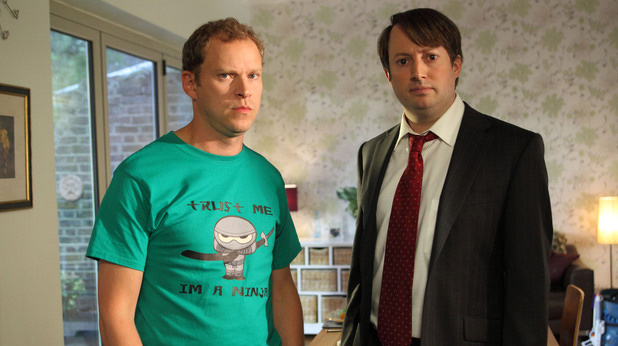 With a final slate of six episodes, Peep Show has come to an end. Starring David Mitchell as Mark Corrigan and Robert Webb as Jeremy ‘Jez’ Usborne, the show followed their lives for a decade (the final episode involved a rather awful 40th birthday party for Jez). It ended with the protagonists in a situation hilariously reminiscent of the one they were in when it all began – sharing the same flat, together, alone. The Guardian’s Sam Wollaston wrote “they’ll carry on, as before, even if we’re not peeping any more”. Yet we left the “El Dude brothers” in a situation of quite unprecedented despair, both having recently failed in their pursuit of respective love interests, with Jez struggling to come to terms with turning 40, and Mark’s final thought in the show being simply, “I must get rid of him”.

Throughout Peep Show’s 9 seasons, we laughed and laughed, and we sometimes cried, although more often with horror than with empathy. In fact, apart from a very brief moment when Mark’s son was born (“Maybe my son can sort climate change! He might figure out cold fusion! Not as one of the main guys, that’s unrealistic, but in an administrative capacity!”), I struggle to think of a single, untainted, heartwarming moment. But that was part of, if not most of, the charm of Peep Show. It was never intended to be a Hollywood story with heroes and a happy ending. Rather, it was a dark sitcom which was such a brilliant piece of observational comedy precisely because it conveyed, unrelentingly, so many of the miseries and misfortunes we face. The originality of Peep Show lay in the fact that every shot (except the opening one in each scene) was filmed with head-cams, from the characters’ points-of-view, and the fact that we could constantly hear the thoughts of the two main protagonists. This concept helped to make the show so relatable; the viewer could hear the bitter inner-commentary, the insecurities, and the personal schemings of the characters, without having to make an exaggerated dialogue out of them. According to the actors, it was also quite a pain to film with this method, so we will have to wait and see whether this is something which dies with Peep Show, or comes to be used elsewhere.

How well did the writers do the final series? The plot stayed true to the aforementioned pattern of unqualified misfortune and a total defiance against happy endings. There were some new classics: Mark’s improvised dinner party, including cheddar with blue lines drawn on it; the moment he buried a very drunk Sophie in the ball-pond at a soft-play area, attempting to conceal his ex-wife from April, the shy Dartmouth student (now graduate) who was brought back into the show after just one previous appearance, long ago. Oh, and Jez and Super Hans deciding to take the initiative and, err, kidnap April’s husband, in a rather short-sighted attempt to please Mark. Dobby returned for one episode, very much ‘over’ Mark, and Mark finally realised it was never meant to be. Amusingly, he ends up being beaten up by her boyfriend mere minutes after finally ‘getting over’ her himself – a misfortune reminiscent of the time he “accidentally” got engaged to Sophie shortly after deciding it was time to leave her.

Mark ended the series having apparently embittered Sophie one time too many with the burial incident, and having somewhat spooked April with his complicity in the kidnapping. Jez ended it having discovered his bisexuality and been left quite devastated after being dumped by his first boyfriend, because he both lied about his age, and was too old to party. And Super Hans’s short-lived marriage (and consequent short-lived attempt at life without drugs and alcohol) lasted only the duration of the series (it finally comes to an end because “apparently I’m not even allowed to do a little f***ing naughty kidnap”); the last we see of him, he is heading off to Macedonia “to finally set up the moped rental”. Twitter proceeded to overflow with demands for a Super Hans spin-off.

There were, however, some ways in which the final series was lacking. Some jokes felt like they could have been written differently: for example, Jeremy’s rambling, improvised best man’s speech at Super Hans’s wedding was a funny joke in itself, but personally I was left wanting to hear a genuine best man’s speech reflecting on their twisted friendship. And while some of the farewell appearances by characters from previous episodes were perfect (Jeff only appeared in this series briefly – to steal Mark’s job!), some were lacking (I had assumed that Mark’s dilemma over whether to accept Sophie’s drunk offer to live in “nana’s cottage” with her would have continued into the final episode), and others were missing altogether (where was Jez’s former wife, Nancy?). But, overall, the writers did a good job of generating some (negative) closure (now we know Mark and Sophie/Dobby will never happen, and Jez and Super Hans will never make it big… and Super Hans will never become a “norm”), while leaving the rest up to our imagination. This reflects how throughout the show we were only ever teased with partial information about the background of the “El Dude brothers”, and never given the full story.

And so ends one of the finest British sitcoms in recent years. After two marriages, various girlfriends (and a boyfriend), a few affairs, a baby, multiple jobs, Johnson the megalomaniac, a canal boat trip, Gerard (who “died of a cold”), a “shroom party”, Big Suze the “mental posho”, a brutal paintball session, a burglary, a mugging, and a vast array of awkward moments, Mark and Jez no longer want us peeping in on their lives. We may be waiting some time for another observational comedy so very well-observed.