Thom Addinall-Biddulph in Television on 10 December, 2010. 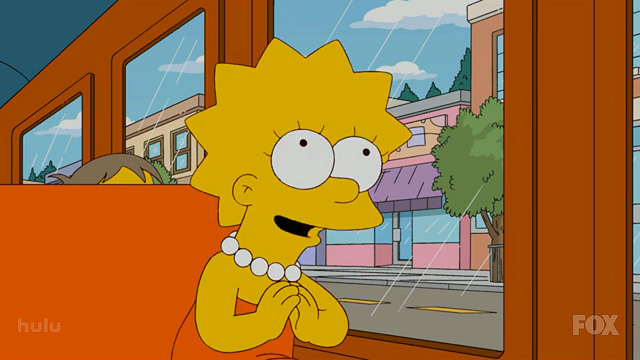 Never underestimate the power of television. For anyone of my sort of age, it is something we have just grown up watching at least once a day, more or less. Of course everyone discusses the latest X Factor contestant, the latest twist in Lost, the declining quality of British sitcoms… but for me, I have realised it’s worse than that. There is one show that isn’t just my favourite television show, it’s my way of life. It indicates just how much a TV series can affect a person. That show is, for me, The Simpsons.

I first watched an episode of The Simpsons in November 1997, a good decade after they first appeared as “crudely drawn filler material” (to quote the show) on The Tracey Ullman Show, eight years after it transitioned to a proper series, and even several years after it crossed the Atlantic for terrestrial viewers. I was instantly hooked, even though I could barely hear the episode (“Lisa’s Sax”, from season 9) over my parents and their friends.

I swiftly became utterly obsessed with the show, buying the episode guides, watching as much of it as I could with only the BBC (and no internet at home until 2008, amazingly), and buying the videos. Not to mention T-shirts, toys, soap dishes, toothbrush holders, comics… I was a kid then. In 2007 I finally got continuous personal internet access via my new laptop and the connection in my college room, and almost the first thing I did? Finally catch up on all the seasons that had aired Stateside and on Sky, but were years away on Channel 4 (to which it had by now transferred). Apart from the current season, I have seen every episode at least twice.

It is difficult to overstate how much The Simpsons means to me. I remember my school years by which season was airing on BBC/C4 that year (they align perfectly in fact – year 9 was season 9, year 10 was season 10, and so on). I was hugely excited by the release of each new episode guide, until they stopped bothering with them (the last was The Simpsons One Step Beyond Forever in October 2005). I still am hugely excited by the DVD boxset releases.

That is all fairly standard, though, for a show one likes – I could say much the same of Battlestar Galactica, American Dad!, The Thick Of It, Deadwood, The Wire, and so on. The Simpsons has gone far beyond that for me. It is my cultural encyclopaedia: there is so much I have picked up from the show in terms of music, film, and so on. I first came across Thomas Pynchon, an author I’m now researching for my PhD, in his appearances on the show. I discovered Tom Petty, Elvis Costello, The Byrds, Radar Love, Good Morning Starshine, White Rabbit, and many other bands and songs through their use in episodes. My love of The Shining comes, in part, from the show’s brilliant parody of the film, “The Shinning”, which I saw long before the Kubrick picture (and is the reason I sought it out). The season 10 episode “Mom & Pop Art” is more or less what got me into art, which I’d previously had no interest in, and gave me a specific interest in Georges Seurat, Henri Rousseau, and Salvador Dali.

But more than anything else it has actually hugely affected my language. There are so many phrases I use that originate from The Simpsons. For example, when frustrated with things I will tend to say “when I’m kicking you that means”; a phrase that comes from my favourite episode, season 8’s “El Viaje Misterioso de Nuestro Jomer” (it was a tortoise originally, which Homer was kicking during a chilli-induced hallucination…). In response to any slightly odd comment I will say “mm…hmm”, which comes from another season 8 episode, “Homer’s Phobia” (the setup for which is too complicated to explain but involves the phrase “coming out of the closet”).

My whole inflection and tone is based on The Simpsons: it’s hard to explain, but there are so many lines I love that I have adopted the tone, if not the words themselves. One example: when Homer becomes leader of a cult in the season 6 episode “Homer The Great”, he suggests he could help people by “getting a bunch of monkeys, dressing them up, and making them reenact the civil war”. When Lisa points out that this doesn’t help people, he replies, “Couldn’t hurt… unless the monkeys start hurting people. Which they almost certainly would.” The way in which he says that final line is the exact way I make final statements explaining my view on something. And some quotes are just always useful: “it’s because they’re stupid, that’s why – that’s why everybody does everything”; “what’s the point? We’re all slowly dying”; “in your face, space coyote”… and there is the season 6 episode “Fear Of Flying”, the lines from which, I reassure you, from much experimenting, can be changed to suit almost any situation. Though the line “you’ll be picking many a bean” really should be left as it is: it’s perfect.

What I want to say is that this show is, of course, a brilliant, hilarious, intelligent piece of television (from seasons 3 through 10 at the very least), but beyond that it has actually, to a very significant degree, formed my character. I will also debate the show’s plots with myself; Lisa’s unreasonable behaviour (in my view) when she becomes vegetarian and tries to force it on everyone else is a good part of the reason why I am very wary of pushing my views on other people. When she became a Buddhist I considered her objections to Christianity and developed an interest in Buddhism myself. This might make me sound like a slave to television, and I suppose maybe I am, but The Simpsons has been such a huge part of my life (as the Simpson kids say when taken to task by Homer for loving the TV more than him: “it’s spent so much more time raising us than you have”. And I have amazing parents.) It is only, really, to be expected that I would be so influenced by it – especially being an only child, it might as well be my metaphorical sibling.

Buy the DVDs and episode guides on Amazon: