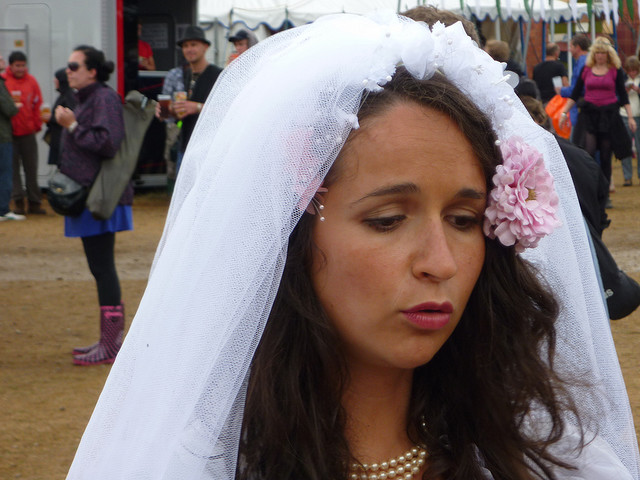 What is so appealing about “Gypsy Weddings?”

My Big Fat Gypsy Wedding, five words which, if you’d asked me a few months ago, I would have suggested sounded like the worst possible idea for a TV show. I’ll admit that I’m usually a fan of trashy TV, with my viewing habits the butt of many a joke amongst my housemates, but the semi-educational nature of documentaries means they are normally something I try in earnest to avoid. Despite my best efforts with the joys of a finalist’s workload came a sudden, and rather urgent, need to procrastinate and I can now be found happily flicking through the most obscure digital channels happily ignoring the lack of progress with the dreaded dissertation. But in the depths of a Durham winter, with nothing better to do one Tuesday evening, I found myself happily settling down to find something suitably trashy to distract me when the TV guide informed me of my fate. Whilst initially I’ll admit I considered flicking over there was a little voice inside my head that urged me to put down the remote and enjoy what was sure to be car-crash television, and boy am I glad I did!

Fast forward five minutes and I was hooked, with righteous indignation and astonishment alternately taking control of my emotions. It wasn’t long before I realised I was not alone in my love of the show, with whispered conversations in the library about last nights episode and moral judgements being passed in the self service queues at Tesco. Within a few weeks I found myself, unable to think of an interesting fact about myself, announcing to a seminar group that I loved My Big Fat Gypsy Wedding and it was my guilty pleasure, only to see that I was by no means the only fan within the group. With record viewing figures it clearly struck a chord with people the length and breadth of the country, but what is it that’s so appealing about a programme I know I should hate? Am I truly interested in the wedding preparations of travellers? or am I really just taking the opportunity to pass judgement on an alien culture?

Gypsy Weddings provides viewers with an insight into the secretive, and often misunderstood, culture of travellers through what is evidently a very important event in the lives of girls who admit their main ambition in life is to keep house, or more accurately van, for their future husband’s. Whilst this sounds like a mundane idea for a TV show, once you’ve seen the excesses of a wedding traveller style you begin to understand why the subject deserves its own show. I’ve never seen such over the top displays of colour and apparent riches, with an obvious competitive element to the whole event. Whilst this may not lead to what I would consider a traditionally tasteful wedding, you’re left awestruck by the way in which they pursue their idea of the dream wedding with a dogged determination, and if the aim of television is to create a spectacle then Gypsy weddings are certainly an eye catching way of doing it! It would appear that the mantra “no pain, no gain” is taken up with vigour by traveller girls, with the scars caused by the excessive weights of their OTT dresses seen as a mark of honour as to the extravagance of their wedding. My personal favourite was 17 year old Sam, whose dress was so intricately laden with fairy lights and beating butterfly wings that the ever present Valda, gypsy dress designer of choice, felt it necessary to be on hand with a fire extinguisher just in case this 14 stone concoction were to combust! If that isn’t a mark of a good wedding I don’t know what is!

But whilst the programme undoubtedly provides light relief it also probes into other more uncomfortable aspects of the traveller culture, and it was these elements which kept me glued to the screen. Secrecy seems to be a watchword amongst travellers, whether by choice or necessity, and I’m sure I wasn’t the only one wondering how exactly the travellers were able to afford such ostentatious displays of wealth. Unfortunately this was an aspect for which the programme provided more questions than answers, with Valda explaining that she couldn’t divulge the cost of one of her spectacular dresses for fear of offending the community (though judging from her rather expensive Range Rover it’s fair to assume we aren’t talking peanuts!). Furthermore whilst many watched in horror at the gyrations of pre-teens who looked like they had been the victims of a good tangoing the morals of the gypsy girls were beyond reproach, questioning the value we place on outward appearances and the judgements and prejudices we all hold. Whilst viewers may not agree with all the lifestyle choices travellers make, and I certainly include myself in that group, the programme offers people an insight into the realities of life in traveller culture, attempting to challenge misperceptions. However despite this a quick glance down the comments section of any of the numerous Daily Mail articles on the subject suggests that it has not done enough to change the opinions of many. The shows undoubtedly focused on elements likely to make the blood of certain sections of society boil, rather than entirely on dispelling misperceptions, and that is certainly reflected in the divisive reaction the show achieved. However that is certainly not to say the programme is not to be enjoyed, and in a way the righteous indignation it provokes in many is part of its charm!

Will we be seeing more of Gypsy Weddings? I hope so, I’d hate to think the Royal Family would have a monopoly on big televised weddings this year. The light hearted focus on the extravagances of traveller weddings drew in nearly 10 million viewers, providing not only impressive audiences but also an exploration of an often misunderstood culture. Did it change my opinions? Well not really, I don’t feel the programme has dramatically transformed my views on the travelling community, although it certainly got me to look at things from another perspective. And if there’s a new series will I be watching? You betcha!