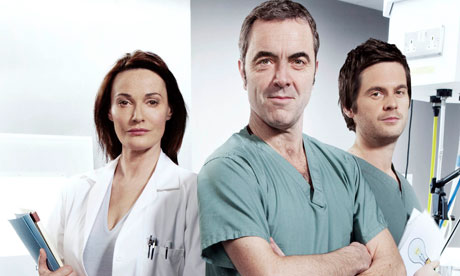 Monroe: Bringing witty and engaging drama back to ITV.

For those who are yet to check into St Matthews hospital, Monroe follows loveable head of neurosurgery Gabriel Monroe, brought to life by James Nesbitt. As the show develops you’d be forgiven for drawing comparison with Hugh Laurie’s Gregory House across the pond. Indeed Peter Bowker’s attempt to adhere to the mass amount of British House fans can sometimes come across as crude and blatant, after all Monroe is an emotionally stunted maverick-head of a three man team with only one friend and a volatile love/hate relationship with a female colleague. Over the last few episodes however it’s the personality of Nesbitt’s protagonist that truly manages to differentiate and override the contextual similarities by providing us with a far more compassionate, tortured genius.

Monroe interacts with patients, tries to console families, keeps his personal trouble away from work and acts refreshingly like an actual doctor. For a man who has just been left by his wife and grieves the death of his daughter he is a remarkably likeable and agreeable guy and so far has consistently remained so. Immediately you’re on his side, and not just because of his profession. He is supported by his best friend and anaesthetist Laurence Shepard (Tom Riley) and his enemy – and probable potential lover – Jenny Bremner (Sarah Parish), the emotionally stunted but ultimately just cliché of a heart surgeon. Both of these characters however are about as empathic to Monroe’s quite substantial family problems as the diseases that riddle the hospital. These started out as novel character traits but now I’m left wondering when they’ll just cut the guy a break.

This week’s brain ailment comes in the form of tumour-induced epilepsy. The primary conceit crudely raises ethical debates as the patient believes he can converse with God and is overcome by a sense of peace and acceptance. Monroe is quick to call this out as a side effect of the tumour pushing against his brain but throughout the episode is berated by an over-passionate and irritating daughter who believes her father’s delusional outpourings. This whole narrative section seems forced and trite and doesn’t hold up to the simpler and more engaging plot lines of the last few weeks. The medicine takes more of a back seat in this episode as seemingly a lot more screen time is given to Monroe’s own problems and the budding relationship between his best friend and nemesis. The former of these is continually handled nicely with touching performances from Nesbitt and his on screen wife.

It is the other relationships that in my mind are beginning to let the show down. Monroe’s own story is brilliant and affecting whereas his friends’ just seem tortured and unnecessary. This week Monroe finds out about the love affair between his two colleagues and as such throws both individuals involved into a ridiculous rage. I tried my best not to think it, but as Monroe’s best friend shouts at him about emotional detachment and lack of happiness, I just saw an attempt to mimic the turbulence of House and Wilson’s relationship. This wouldn’t have really been a problem had Nesbitt’s character so desperately not deserved any of the abuse his friends were spouting. I genuinely hope Monroe doesn’t continue down this route (although the preview of next week suggests it will) as frankly it would be to the show’s detriment. Monroe’s most defining feature is his likeability and an hour of his wining friends winging and him will surely grate on the viewer.

This weeks show continues its trend in raising the directorial bar for ITV. Everything is nicely paced, even the more irritating scenes; nothing seems to linger unnecessarily. Even so, often you’ll find yourself rolling your eyes when Monroe struts down a corridor towards the screen followed by two desperate lackeys and the transitions between scenes don’t really work as intended. The music however is surprisingly upbeat, complementing Monroe’s character and setting it apart from the dark dirge of many other hospital dramas.

Monroe provides something that ITV has lacked for a long time, gentle, witty and engaging entertainment. It’s unlikely to win any awards, and this episode especially did not live up to the other three, but the performances on the whole are brilliant. Nesbitt especially succeeds in bringing us a truly likeable medical professional which these days seems to be a nice change of pace.