Making nice with the neighbours 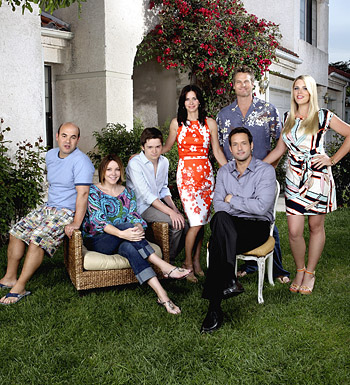 Cougar Town is the new series created by Bill Lawrence, creator of Scrubs, and starring Courteney Cox, formerly one of the stars of a little-known ’90s sitcom called Friends. It didn’t inspire the greatest of hopes when its name was revealed. Taking its title from a term used for older women who like to prey on younger men, it seemed we would be getting a depressingly shallow half hour where Miss Cox sullied the memory and diminished the goodwill she earned from Friends. (If you believe that she didn’t earn any goodwill from Friends then this article is probably not for you.)

Cox stars as Jules, the cougar of the show. She is supported by Christa Millar (Lawrence’s wife also seen in Scrubs) as the best friend. Busy Phillips (Freaks and Geeks) is her friend and co-worker. Brian Van Holt plays her unemployed ex-husband who lives on a boat. Dan Byrd is her son with whom she has a somewhat unhealthy bond. Josh Hopkins is the neighbour who will obviously become something more and Ian Gomez rounds out the cast as Millar’s goofy husband. These seven characters form the core crew and support and enable each other through various trials and misadventures.

For the first five or six episodes the show forces Jules on a series of desperate escapades in an attempt to stave off what she sees as her approaching dotage after turning 40. Mostly they involved her running after much younger guys. There were indeed cheap laughs to be made from these situations, but there are funnier sitcoms out there that have a similar premise. Two and a Half Men has mined almost 10 seasons worth of comedy from Charlie Sheen and John Cryer in similar desperate situations. It is perhaps admirable that the main character is a woman, as previously television has been reluctant to put women in such situations. This was, however, undermined by the impression that we were only being asked to laugh at Jules and never with her. Similarly, the surrounding characters were all one-note and seemed to be there simply so that Cox had people to interact with.

Luckily it seems that Bill Lawrence suddenly recognised this, with the result that the tone of Cougar Town changed drastically. The humour has become decidedly more off-kilter, perhaps drawing from the memory of Scrubs. The emphasis is still on Jules but there is now a greater emphasis on the quirky cast of supporting characters instead of Jules’ search for younger love. These characters are no longer the mere caricatures they were initially. Millar and Gomez in particular have one of the more unbelievable marriages. By focusing on all these characters the show makes it more understandable why they all spend so much time in each other’s company. That is, after all, the premise which every sitcom asks you to buy into: that a group of people would spend almost all their time with each other. Who really does that? Sure, we may spend more time with certain people, but TV shows (and comedies especially) make it seem like their characters only really spend time with three to five other people. Such a situation is so divorced from real life that a show has to make it extremely plausible that these people actually can enjoy each others’ company greatly. It is in this area that Cougar Town has really come into its own. This also gives the writers more room to play with. The story lines that don’t involve Jules can now be just as funny as the ones that do. Each member of the cast holds their own.

Cougar Town doesn’t deal in big, obvious, set-piece comedy. It is more concerned with finding humour in how the members of this small community get along with each other, and the moments that make them the friends they are. It doesn’t deal with pity or humiliation either so we don’t spend much time laughing at the characters. We simply enjoy the time spent watching them and laughing with them.