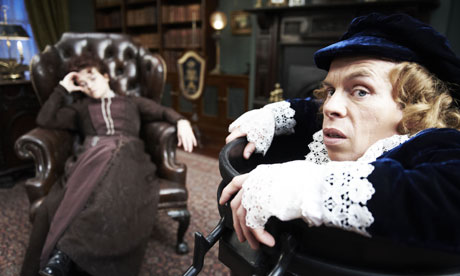 Life’s Too Short: Too reliant on humiliating Warwick Davis?

Life’s Too Short, the newest addition to the Gervais/Merchant stable, has just completed its first season. I have been a fan of the writing/directing duo for many years and am in awe of their ability to inject pathos into their comedies, a skill they have consistently and masterfully demonstrated. The problem with their latest offering is that the writing lacks the courage of its convictions. Too many heart-wrenching insights into Warwick’s disastrous life denigrate him with their punchlines. And I’m not sure how much of that I can take.

The show is a mockumentary that follows the career of a fictionalised Warwick Davis, best known as Professor Flitwick in the Harry Potter series and as himself in Extras, where Ricky Gervais kneed him in the face. In this series we are given an insight into his disintegrating marriage, observe the offers for work drying up and watch him belittled time and time again. As the title would suggest, his height is at the heart of the show. One thing Life’s Too Short captures extremely well is Warwick’s idiosyncratic relationship with dwarfism. He is preoccupied with, but not ashamed of his size. It does not seem inconsistent that he, on the one hand, takes his accountant’s insensitive observations with good humour, yet resents a maitre d’s implication that he could not be dating an attractive woman. I believe that the authors intended for us to perceive an obsessive streak in Warwick. It is constantly demonstrated that when he experiences anxiety or rejection, he self-destructs. It is as if he subconsciously believes that he deserves embarrassment, and determines that his size will be a target for humiliation

With this in mind, Life’s Too Short looks set to reveal itself as tale of redemption, similar to the duo’s previous sitcoms. Extras and The Office saw the thoughtless, but ultimately sympathetic protagonist realise the error of their ways through a dramatic insight into how others perceive them, then resolve to change. Life’s Too Short’s presentation of celebrity supports this in a vein similar to Extras, demonstrating that it is more important to be nice than to be successful. Indeed Helena Bonham-Carter’s hysterical cameo beautifully realises Warwick’s fear of rejection and helps justify his anxiety. In this scene Warwick stands in for a child acting in her latest film. Though he reads his lines perfectly, she communicates to the director (crucially, not to Warwick himself) that he is putting her off; the set ultimately decide that the best solution would be to have him speak from a bin that obscures most of his body. He is then accused (again, indirectly) of the bin’s foul smell and dismissed from the set. As a standalone scene, it is superbly executed; Warwick is at once frustrated and humiliated, we laugh at the extremity of the set’s reaction and then ruminate on their bewildering lack of tact.

But problematically the series suggests that it is not just the entertainment industry that should be approached with caution. Here, the world is a very hostile place. And if Warwick is a product of his society, we cannot be certain if redemption is possible. Crucially there are no supporting characters that could plausibly act as a positive influence. Several people appear in multiple episodes, but usually just to make a callous observation about Warwick’s height or watch ambivalently as he humiliates himself. Whilst this undoubtedly lends realism to the series’ faux-documentary style, it isn’t very satisfying. Only two genuinely decent people emerge in the series. Kiruna Stamell’s Amy and Jon Key’s Anthony are demonstrated to be kind and dignified, but cannot act as foils to Warwick because they are given so little screen time. The season’s final scene suggests that Amy will become a more permanent and influential character, and I really hope she does. Without her, Warwick has no-one. His only ‘friends’ are Rosamund Hanson’s gormless assistant and Steve Brody’s incompetent accountant, who care for him little more than the lawyer who sleeps with his ex-wife and sues him on her behalf. Though Brody gives a delightfully irresponsible performance, it is frustrating to watch his character, a man who has known Warwick for years, find so much hilarity at his expense. Without the quietly optimistic glow of a Tim Canterbury or Maggie Jacobs, I fear that Life’s Too Short may prove too depressing to stomach.

Yet I am encouraged by how much I feel for Warwick’s character, and live in hope that he will be given the respite he deserves. At the centre of this show is an exceptionally charismatic performer, who makes us root for him in spite of his flaws. Given the chance, the series could blossom into something exceptional. But without Gervais and Merchant’s foresight, it is too easy to accept it as merely a collection of wince-inducing vignettes. Let’s hope that season two will prove this wrong.