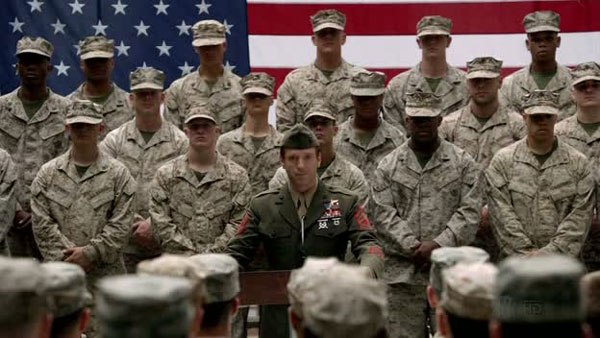 Homeland: A nuanced thriller about terrorism?

Remember the convoluted, heavily cliffhanger-oriented plots of 24? Well, Howard Gordon and Alex Gansa, the men responsible for writing Jack Bauer’s third and fourth horrendously unfortunate days into being, returned last fall with their own project Homeland. In terms of elaborate plots, the duo are obviously very much in their element here. Nicholas Brody (Damian Lewis), an American marine sergeant who is taken as a POW in Iraq and presumed dead emerges eight years later, his miraculous survival rendering him the ideal poster-boy for US military patriotism. Yet CIA agent Carrie Mathison has privileged information that Brody may have been ‘turned’ by notorious terror-cell leader Abu Nazir and has returned in order to conduct a domestic terror attack against the US government.

Enticing dramatically, but alarm bells were set off in my head upon first hearing the concept. Wait, this is from the guys who did 24 right? And 24 was notoriously sketchy in its portrayal of terrorism, particularly in season four, where the line between ‘Muslim’ and ‘terrorist’ was pretty much eroded. I’m not here to hold 24 up as the embodiment of Bush-era xenophobia (that little nugget has already received considerable attention) yet it inevitably bore the hallmarks of post-9/11 paranoia: terrorism came from outside, was a tool of the ‘Other’. So the question is whether Homeland, ten years later, is simply reversing the tried-and-tested terrorism storyline in similar insensitive terms, or whether it constitutes an act of turning scrutiny towards the US; an act of self-criticism in a different cultural climate.

Fortunately, I believe it to be the latter, this being primarily due to the fact that Homeland’s characters are, on the whole, drawn with much more nuanced brushstrokes than CTU’s motley crew. Jack Bauer was a one man fighting machine, the stock-type who doesn’t play by the rules, whereas we cannot pin down Brody so definitively. Do his apprehensions about reintegrating into American society stem from a newfound ideological difference (he converts to Islam whilst taken prisoner) or from the psychological grievances of having endured eight years of torture? Painstaking scenes in which Brody cannot make love to his wife are showcased alongside erratic bursts of violent behaviour: is this man a damaged victim or a brainwashed Islamist killer? Luckily neither label suffices and when we do discover that Brody intends to carry out an attack, his motivations are well-fleshed out and derive from humane and sympathetic impulses.

Unfortunately, I shall have to spell out the root of Brody’s grievances, so if you have not yet seen the show, avert your eyes for this paragraph!…O.K. After Brody’s affectionate relationship with Isa Nazir is shattered by an inaccurately deployed U.S. drone strike, of which he is one of 83 child casualties, the object of scrutiny shifts from Brody to the U.S. government. Whereas the entire ninth episode is dedicated to Brody and Isa’s bonding sessions, towards the end of the episode we are greeted with the American media’s curt version of events: “the images [of the dead children], we believe to be false, created by the terrorists for propaganda purposes.”

The disavowal of the drone strike permeates several plot lines within Homeland and invites a consideration of the ethics of the US’ deployment of ‘anti-terror’ measures abroad. Indeed, drone strikes are a relatively recent phenomenon, with 2010 being declared ‘the Year of the Drone’ and have undergone great scrutiny as regards the high-risk of collateral damage attached to them. In fact, the Obama administration has recently come under attack for heavily classifying data concerning the identities of those killed in drone strikes in Pakistan. This concern is dramatised in Homeland as Saul Berenson, the maverick CIA operative, battles to uncover the paper-trail behind the drone attack as it is rapidly being expunged by those further up the chain. Counterpointed against the emotive images of Brody searching the rubble at ground zero, this secondary storyline also highlights how the bureaucratisation of terrorist events drains them of their reality. From the perspective of the office-based operatives (as well as our own in earlier episodes) it is Brody’s actions, rather than those of the US government, that seem unprecedented and extreme.

And it must be mentioned that our uncertainty regarding Brody’s intentions is brilliantly toyed with since the majority of events unfold from Carrie’s perspective. For Carrie is bipolar; and this not only provides the opportunity for some nuanced characterisation but also acts as a brilliant plot device. It is not a question simply of Carrie’s conspiracy gradually being proved true, but rather we are left to ponder which parts could be neurotic embellishments as she becomes increasingly obsessed with Brody.

Homeland, whilst providing the labyrinthine storyline and cliff-hangers required for any good thriller, involves an awful lot more questioning than expected at first glance. Our point of view is focused through an unreliable character and we do not end up having to swallow stereotypes whole in order to get our thrills, as with 24. Instead, we are invited to question the ethics of ‘anti-terror’ methods, government culpability and the appropriateness of Brody’s aggressive response. Here’s to hoping that season two (airing in October) keeps it nuanced…