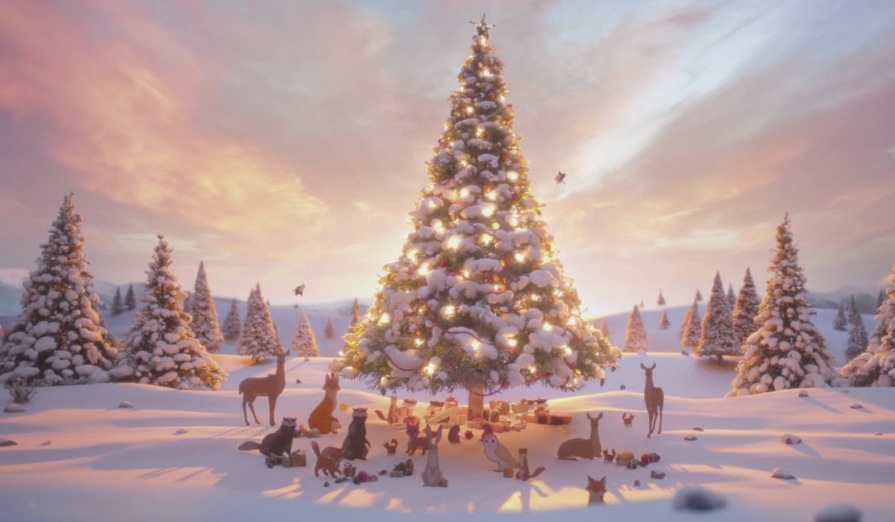 On an everyday basis, nothing gets me more in the festive mood than the hoard of Christmas TV adverts that clog up the commercials; whether it’s the excitement of hearing the sultry tones of the M&S lady describe this year’s selection of party nibbles on offer, or being reminded of the last-minute stresses of present-buying, these jovial ads provoke a wide range of emotions.

Whether you love them or loathe them, you can’t escape them.

For me, they mark the start of the official ‘season to be jolly’. Okay, so there’ll inevitably be people who gasp in horror; ‘adverts in November? Madness!’, yet even the Scrooges and Grinches that claim to ‘hate the fuss of it all’ can’t deny that it gets them thinking – it plants a seed in the mind that gets you mulling the possibility that ‘maybe Christmas is just around the corner…’, and thus, whether you like it or not, the adverts have worked; whether you put your decorations up on the 1st December or wait until Christmas Eve, the festivities are almost here.

Every year, there are certain archetypal adverts that seem to perpetually grace our screens, so I’d like to share some of my favourites with you. Some make you laugh, some make you cry, and some make your do both simultaneously, but for all the wrong reasons… enjoy!

Every year, Facebook is filled with statuses anxiously awaiting the John Lewis advert. This year, it didn’t disappoint. Titled ‘The Bear & The Hare’, the advert tells the story of two unlikely furry friends in the lead up to Christmas. The advert begins in true story-book manner, telling us that ‘There was once an animal who had never seen Christmas’, as the pair eagerly await the snow. Once it has fell, they join the other animals in decorating the tree, that is, until the bear succumbs to his natural instincts and is forced to hibernate. The Hare (who looks so sad when his friend leaves I cry a little bit…) leaves a beautifully wrapped present at the foot of the cave as the scene returns to the other animals. When Christmas Day arrives, the animals begin to open their presents. Just as the Hare looks down in despair, the Bear steps out to the sight of the majestic Christmas tree. The camera then returns to the cave, revealing that the gift was in fact, an alarm clock – a gift described by the ad’s creative directors as ‘giving his best friend the gift of Christmas’.

Perhaps the advert’s message is that there is a special, unique gift out there for all your loved ones this Christmas, and no matter how abstract and immaterial that gift initially appears to be, it can still be found in a John Lewis Department Store. Still, I prefer the naïve view that the advert simply stands to warm out hearts; the fact you can buy the book ‘The Bear who had never seen Christmas’ from John Lewis could be seen by cynics as a money-making ploy, but when £1.20 from every sale goes towards ‘Save the Children’, it’s still pretty much at the top of my Christmas list!

A festive take on an advert that’s well-loved all year round, Aldi’s Christmas adverts have lived up to expectation. Aldi’s advert formula tends to be straightforward gold; someone states that they like a well-known brand, and that they also like Aldi’s own brand, before some kind of undercutting, funny remark ensues (we all remember the classic ‘I don’t like tea… I like gin…’). Whilst there are a couple to choose from, my favourite is this year’s ‘mince pie’ advert. Beautifully understated, a father sits comparing the two brands of mince pies as his daughter cheerfully makes a snowman in the background. As he explains that they like both brands, he simply asks ‘where’s your brother Sophie… Sophie?’ – as she happily pats down the snowman, we become increasingly aware of the sad expression of the snowman’s coal smile. Genius.

This year’s Tesco advert aims to provoke a sense of nostalgia, showing the highs of lows of a family Christmas, making the viewer exclaim ‘ha, look at that, our family’s exactly the same!’

As a naturally soppy person myself, when I first saw the advert it made me well-up and get that gooey Christmassy feeling. Still, when I put my cynical hat on, I get a bit more critical of the ad; my problem is that in trying to be understated, it tries too hard. The advert is built on stereotypes; it begins with a home-movie style filming of a couple, seemingly celebrating their first Christmas together, and goes on to Christmas with their young family. As the children get older, the camera quality increases slightly with the evolution of technology and the facial hair keeps to up to the latest trends of the time. Cue the moody-teens-curtain-hairstyle years, the family persuade said ‘moody teen’ to join in with the family dancing, before eventually revealing that the couple’s daughter is pregnant with their first grandchild. The camera finally shows the long-awaited Christmas dinner, when the advert ends by stating ‘There is nothing better than Christmas’. I see what it’s doing… but with its ‘over-the-top simplicity’ it’s not really my cup of tea.

… I was not expecting this. I mean, if this truly is the Coca-Cola advert for this year, it’s lovely, and incredibly sweet. I like it a lot. Alas, I can’t be the only one who was expecting the classic ‘Holidays are coming’ music with a truck being driven by Santa Claus!?