Give ‘The Killing’ a Break 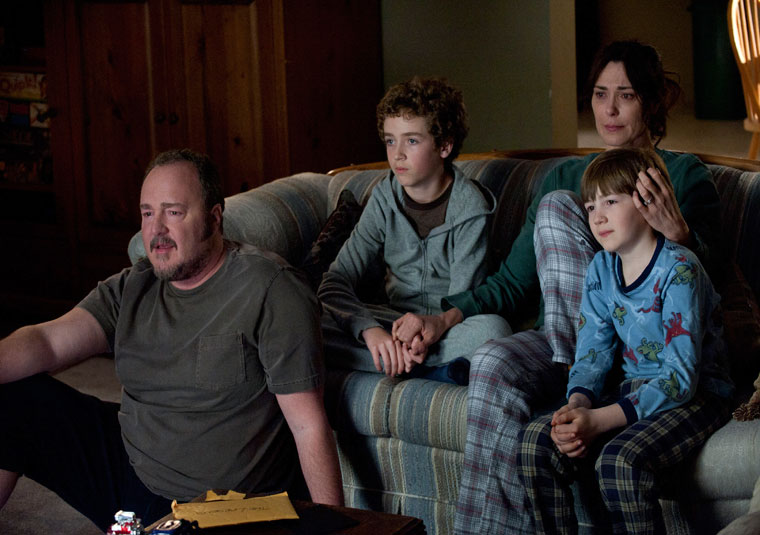 The Larsen family enraptured by their TV screen…an effect The Killing hasn’t been able to produce amongst its audiences.

AMC’s US-adaptation of Forbrydelsen, The Killing needs to be given a break, and I mean this in two respects. For the show has been met with an increasing amount of flak lately, with viewing figures plummeting towards the end of the second season. Whilst criticisms targeted at the show are not unfounded, The Killing has been painted as that slow, lazily-written show that you should love to hate. Now whilst I want to stand up for the show’s output thus far, it needs to be given a break in another sense: I heartily believe that it should not be picked up for a third season and if it is, boy will I groan.

Season two’s finale managed to provide closure, as opposed to the constant red-herrings and cliffhangers that have characterised the story so far, as Rosie Larsen’s killer was finally revealed. The season one finale of The Killing had American audiences infuriated, for plot elements started to diverge hugely at this stage: in the Danish show, the killer is revealed at the end of the first series; the US version greets one with only an oh-so-frustrating cliffhanger. It is important to note however, that The Killing should never have wrapped up its case after only one season, for this would have in fact been premature. Forbrydelsen’s first series consisted of twenty fifty-five minute episodes, whereas The Killing clocks in at thirteen forty-five minute episodes per season. As a result, wrapping up in season two is actually closer to the pacing of the original series; in fact, both story arcs weigh in at around twenty hours.

It is interesting to note therefore, that with the same pacing, Danish and American audiences reacted in starkly opposing ways. Greeted by a frustrating ‘finale’ halfway through what is now seen as Forbrydelsen season one, Danish audiences were outraged at having to wait so long and as a result, the show’s writers promptly supplemented the series with an additional ten episodes. The US audiences’ reaction to this same plot-juncture…to stop watching. Ratings have been starkly lower throughout series two of The Killing and I remain rather baffled at this. I am aware that this is not a popular point-of-view, but I find season two superior in several ways. Yes, the show demands persistence and frequently doesn’t repay you for that persistence. Also, season two is hugely unfaithful to the original material; any purists out there will be thoroughly pissed.

However, I actually believe this to be its saving grace in some respects. Parting ways with its progenitor allowed the show to escape unfavourable comparisons with its Danish forerunner. Numerous blog posts can be found documenting the differences between the two shows, but this was a practice that was largely abandoned when series two of The Killing aired. How can plot details be compared when an entirely different central plotline has emerged? Instead it was better to regard the show as a completely different entity, doing its own thing. And some of these elements were certainly the most engaging; episodes centring on the Wapi Indian casino and the resurgence of the gangster-threat surrounding Stan Larsen. This mid season two peak was the highlight of the entire show, creating genuine tension which had begun to dissipate from the repeated use of red-herring suspects, instead giving a sense of plot-progression that wasn’t entirely cheap or unfounded. The events that unfurled midway through the season provided an important backdrop to last week’s big reveal. Yes, these segments were more action-based, and could be seen as a typical last-ditch ratings-boost attempt, but if they were…they actually suited the storytelling style of the US series more.

The slow process of grieving enacted by the Larsen family, the repetitive and mind-numbing bureaucracy of the police department, these elements annoyed American audiences because the US-adaptation didn’t handle the deep characterisation as well and didn’t provide a moody, slow-pace aesthetic to frame it all in. Instead, the more flashy detective show stereotypes are present, with abrupt cuts and jumps, stylistic flourishes that attempt to give the illusion of faster pacing. But the original story content just doesn’t support this…until season two. In a way, I see season two of The Killing as accepting what it was best suited for rather than attempting to force Forbrydelsen’s content into a slightly ill-fitting framework. And I feel that this is what many viewers would have wanted from the show…too bad they had stopped watching by this point.

There is no word out on whether or not a third season will appear. There is still source material out there for The Killing to play with: Forbrydelsen’s second season, a short ten-episode run following a completely different case. But since The Killing now appears a starkly different show, should it even bother trying to incorporate this material? If it continues, two avenues lie open. Firstly, it could adapt the pre-existing material with renewed close-attention, but through an aesthetic which is ill-suited and an audience who if still watching no longer care about its faithfulness. Or, it could invent an entirely new case, spinning-off from the original series and catering to a different viewer-niche. Whilst I seem to have enjoyed following the series more than most, I find myself caring little for either outcome. With the ratings as they are, a third season would have to undergo a major facelift in order to keep the network happy. Season two ended with some engaging and satisfying original writing so maybe it should just be left there…