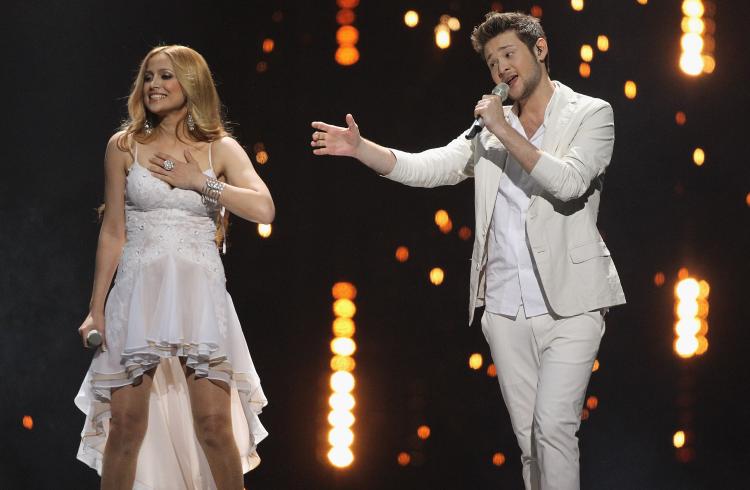 It was that time again! Sat in the JCR, with my hat-drawn countries clutched in my hand (Azerbaijan and Georgia? No hope surely!), excited for a revision-free night of unadulterated cheese. And I wasn’t disappointed. An imaginatively dressed group of freshers, each representing a different country (Denmark had his trusty Danish pastry; Greece, her laurel crown and toga) joined us with their ridiculously complicated drinking game, and the Eurovision atmosphere was set.

The opening presenters proved the cliché that Germans have no understanding of a sense of humour, with a cringe worthy staged show of banter breaking out into a tuneless rendition of their country’s former Eurovision success. So far so good! Eurovision never really lets us down on the second-hand embarrassment factor – It was a relief when the actual songs started rolling in.

With Blue as our entrants, there was a hopeful feeling of success for once, but it was a really strong year (coming from an indie-kid, that’s saying a lot!) so the competition was intense. Shamefully to say, “Jedward’s” Lipstick was a real highlight, being really energetic (like they were on speed); and their gravity-defiant hair had many fans in the audience (sporting amazing cardboard-cutout imitations), and also, it seemed (though his was natural!), Denmark’s frontman. Coiffeur disasters aside, the Danish entry gave us another credible pop song with an annoyingly catchy chorus (as per EV usual), looking like possible favourites for the whole tournament; but, owing to the incomprehensible music taste of Europe, all preconceptions gleaned from watching the show proved unfounded. The result led you to wonder whether any other country was actually watching the same show.

The results were literally unbelievable. Blue did us wonderful credit coming top of the leader-board for a fleeting moment of hope (thanks to lovely Bulgaria for their twelve points!) and coming a highly respectable 11th overall, but it was never going to be – who wants it anyway?. Not even “Jedward” fared much better (“am I heading for a car-crash?” they sing – well, yes). The really weird thing was the overwhelming popularity of the winning song from Azerbaijan, google it, there’s NOTHING about it which stood out – having listened to it a few times I still can’t remember how the chorus goes. The whole of Europe agreed on it though, and it can’t be put down to bloc voting considering Azerbaijan is only on the periphery (of Asia surely?), just collective musical insanity.

Well no one watches Eurovision for reasons of musical integrity, I certainly don’t – Azerbaijan won me money (admittedly only £2.20, but £2.20 nonetheless!) and gave a BRILLIANT revision distraction! I read somewhere that this year’s “EV” has had the highest UK TV ratings since 1999, so at least a few more people must agree! I say we keep piling huge amounts of cash into this wonderful piece of entertainment – where else can you watch such televisual treats as Moldova’s gnome-hatted unicyclists? Who wants to win anyway?