Manon Ardisson in Television on 19 November, 2010. 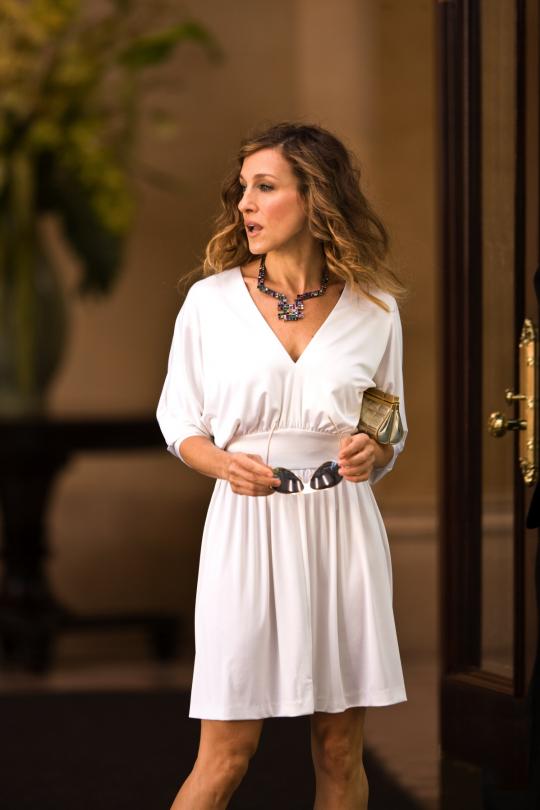 What do a journalist looking for love in Manhattan and a divorcee looking for sex in Florida have in common? Well, they’re emancipated women, or so it seems on your TV screen. In Sex and the City (1998–2004) Carrie Bradshaw (Sarah Jessica Parker) is a thirty year old journalist whose column is based on her, and her friends’, sexual relationships. In Cougar Town (2009-present) real estate agent Jules Cobb (Courteney Cox) gets a divorce at forty years old and decides to make up for the time she lost with her unfaithful husband by dating younger men. Both are professional women, both are sexually liberated and the viewer is tempted to see them as emancipated women. However, a closer analysis of the two series’ pilots – the episode meant to define the whole series, although it might then move away from its initial approach – highlights that Carrie and Jules are actually far from being emancipated.

Both shows were conceived with a vague sense of post-feminism, a trend of feminism emphasizing individual and material achievements for women rather than collective political action. As Carrie is prompt to point out, emancipated women “travel, pay taxes, spend 400 on a pair of Manolo Blahnik strappy sandals, and are alone”. Even though Carrie and Jules both work, it is obvious enough from the series’ titles and storylines that their emancipation is primarily sexual. Sex and the City’s pilot is explicitly about “having sex like a man”, meaning “without feelings”, which Carrie decides to do with one of her on-and-off boyfriends, Kurt. Similarly, in Cougar Town, Jules is encouraged by her friend and assistant Laurie to re-enter the dating world because Jules got pregnant at 19 and “missed” on her twenties. In the bar, Jules meets other cougars, one of whom is “wondering which one of those young bucks to let spin (her) tonight like a pinwheel”. All in all, it seems that Carrie, Jules and most women in the post-feminist era are as free as their male counterparts: they are independent financially and, most importantly, sexually.

However, is emancipation, or feminism for that matter, really about having access to the exact same privileges as men without ever questioning those? Carrie and Jules despise men who behave like they do. Jules’ neighbour, Grayson, a recently divorced forty years old man, routinely brings back younger women to his house, leading Jules to shout at him “stop having sex with babies”. Ironically enough, she then goes and has sex with twenty years old Matt and, at the end of the episode, she even asks Matt to stop talking: he is obviously nothing more than a sex toy. Another way to put things into perspective is to compare these shows with their equivalents targeting men. Entourage (2004-present), for instance, portrays the lives of four newly rich male friends in Los Angeles, and mostly how they manage to have sex with cheap-looking Californian girls. As might be expected, they obey one rule concerning girls: “no girlfriends, no commitments”. The way women are treated in Entourage is nauseating, but there is no reason why Samantha saying she uses men as “sex objects” should be more acceptable. This double standard is particularly obvious in Sex and the City where unmarried women in their thirties are simply presented as “unmarried women” while unmarried men are labelled “toxic bachelors”. I doubt that women’s emancipation is about blindly embracing masculine privileges, but if some women do, they have no legitimacy in criticising the men they emulate.

In addition to trying to behave like the men they despise most, Carrie and, to a lesser extent, Jules are seemingly unable to do it “as well” as men. Carrie is hurt when Kurt tells her he really likes her new – promiscuous – ways, because she was (secretly) hoping to make him need her as she used to need him. Not only is she trying to hurt the man she had sex with, but it does not even work, the implication being that women cannot have sex like men. Similarly, Jules is insecure about her new sexual life, feeling judged by herself and by others, while her male alter ego Grayson is clearly having a good time. Hence, both series imply that women are unable to act like men because they are fundamentally different: they have feelings and men don’t. While feminism is difficult to define, the common banner is to be critical towards the patriarchal hierarchy that ensures men’s supremacy. However, in both these series, women who are represented as “emancipated” are actually reinforcing assumptions upholding patriarchy, especially since they are depicted as overwhelmingly more emotional than men. To use Simone de Beauvoir’s terminology, representation of emancipated women on screen reinforces the construction of women as “Others”, as diametrically different from men, and therefore inferior because they cannot fit in the man-defined norms.

Overall, Sex and the City and Cougar Town both represent “emancipated” women as professional women desperately trying to act like the men they hate most, and failing to do so because they are oh-so-different from their male counterparts. The problem is that generalisations about “men” and “women” not only ignore individual experiences, but also have an impact on the way individuals construct their own identity in a media-saturated environment. As long as “emancipated” women are represented as promiscuous and needy, some girls and women will take them as role models: when watching a group to which you can relate (in this case “women”), the viewer is necessarily affected by the on-screen depiction. Men also face representation of themselves according to which – pardon my French – being a cold-blooded asshole is cool. When Jules asks Grayson “ever get the feeling that you missed out on something?” he simply answers, “I don’t have overwhelming feelings”, which is a good line but also one that once again imply that men do not have feelings. And if they do, they are or should be gay: Carrie asks her friend Skipper if he is gay simply because he says: “I don’t objectify women”. These are the reasons why I think that shows about “emancipated” women are in the end detrimental to feminism and women’s emancipation in general.