Did You Hear What Happened to Charlotte King?

Noémie Duneton in Television on 26 November, 2010. 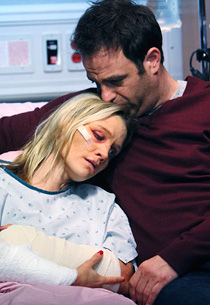 This is what happened to Charlotte King

I’m not usually a huge Private Practice fan; I started watching it because of Grey’s Anatomy and then continued because I like Kate Walsh’s character so much. That being said “Did You Hear What Happened to Charlotte King?” (episode 7 of season 4, the current season) is very striking and well-made, and it really put Private Practice in the spotlight. The episode focuses on the hours following the rape of Charlotte King – one of the main characters, a very strong and proud woman.

“Did You Hear What Happened to Charlotte King?” is striking for several reasons. First, there is the fact that the rape is not shown (at least at first): the closing shots of the preceding episode are of Charlotte being brutally beaten up by a man, and in the opening sequence of episode 7 her attacker has left and she stumbles out of her office where the attack took place. The whole episode is about what comes after the attack – the police investigation, the medical treatment she receives – and we only get glimpses of the actual attack at the very end of the episode. I think this is extremely powerful, as the viewer is not distracted by images reproducing a rape but only concentrates on Charlotte’s pain and the reactions of her friends. This is why I believe it a mistake to include shots of the attack at the very end of the episode. According to me it doesn’t add anything and the interpretation of KaDee Strickland, the actress portraying Charlotte, is so powerful that showing the attack seems nearly obscene and unnecessary at that point.

The opening sequence is, to me, the most powerful part of the episode. Indeed, KaDee Strickland is not directly facing the camera at first and the viewer only gets to see her clearly at the same time as Pete. Thus, anticipation is built, making her bloodied appearance even more shocking. Moreover, the smoothness of the piano music playing contrasting with the horror of Charlotte’s situation makes the whole thing more awful and harder to watch.

The scenes of Sheldon – a psychiatrist member of the practice – interviewing a man at the police station – the man who is the rapist, as it will soon become evident – are also pretty forceful, especially as Sheldon is not aware of Charlotte’s attack. The viewer is thus the only one to know the full story. Actually so is the rapist. While on the subject, I’d like to praise Nicholas Brendon’s interpretation: Buffy’s Xander has turned into a frightful psychopath!

I will not go on describing all the things I admired about this episode; it wouldn’t be very interesting, and I don’t want to spoil the fun for people who haven’t watched it yet, although fun doesn’t seem an appropriate word when referring to a show dealing with rape. On the contrary I will now say why, even though I think this is a great piece of TV, I am disappointed in the way Private Practice deals with the storyline.

In “Did You Hear What Happened to Charlotte King?” most of the characters, including the police officers investigating the attack, do not know that Charlotte was the victim of a rape. They think she was beaten and robbed, and that is the story Charlotte wants them to believe. She only confides in Addison, and arguably only does so because the latter is a gynaecologist and she needs to be examined and treated. Even though it is very believable that Charlotte tries to conceal the rape I was still slightly disappointed that the writer decided not to have her report it, especially as several other TV shows have also recently included unreported rapes in their storylines. However, what really annoyed me is how, in the following episodes, all her friends and co-workers discover the truth one after another – which is in itself not so believable as Charlotte doesn’t give them any hint – and try to push her, not always very gently, to go to the police.

It starts with Addison admitting to having done a rape kit when she examined Charlotte, against her very specific wishes. Although as a viewer you are kind of glad she did, as it will allow Charlotte to change her mind should she wish to, it is still very problematic for anyone’s doctor to go against what the patient wants. I will not go as far as saying that Addison rapes Charlotte a second time but she definitively denies Charlotte’s control over her body, and I very much doubt that will make the recovery easier. But Addison doesn’t stop there as she then calls the police to report the rape and give them the rape kit. One of the reasons she does so is because not handing over the kit to the police could cost her her medical licence. It’s nice to know that she is concerned about not being able to practice, yet has no problem going against her patients’ requests. But what I found most problematic here is that the writers seem to agree with Addison and ultimately portray her violation of Charlotte’s wishes as the right thing to do.

It then continues with Violet, another fellow doctor, revealing to Charlotte the fact that she herself was raped when a university student (the viewer already knows that as it was mentioned in a previous season). I feel like Violet’s story on the show is rather unbelievable: not only was she raped but, while pregnant, she was also cut open by a woman who stole her baby. You’d really have to be very unlucky to be both raped and cut open on two separate occasions in the course of 35 years (at the most) ! Anyway, Violet’s history as a sexual assault victim is supposed to explain why she is able to discover that Charlotte was raped, yet I’m not sure why. Indeed, it seems to imply that all raped women behave in the same way, and although I’m no expert on sexual assault I don’t see why that would be the case: humans generally react differently when faced with the same situation.

But it gets worse: after discovering that Charlotte was raped, Violet then starts to share with Charlotte her feelings and opinions about rape in general and, more specifically, reporting them. This is all in order to push her to do what she believes to be the right thing. Thankfully, Charlotte ultimately shuts her up telling her she’s “neurotic and sticks her nose into other people’s business”. Which she does.

All in all, what annoys me here is not that all the characters seem to know what is best for Charlotte – people do tend to think they’re right no matter what – nor is it the fact that they may actually be right (I mean, if asked we would all agree that it’s better to report a rape than not). No, what really bothers me is the fact that the writers seem to justify and back up (at least for now, the story hasn’t completely unfolded yet) doctors going behind their patients’ backs and people teaming up to bully someone into reporting a rape. However, although there are some negative points, I still tip my hat to “Did You Hear What Happened to Charlotte King?”. It is truly an impressive piece of TV.