Laurie Gellhorn in Television on 26 February, 2016. 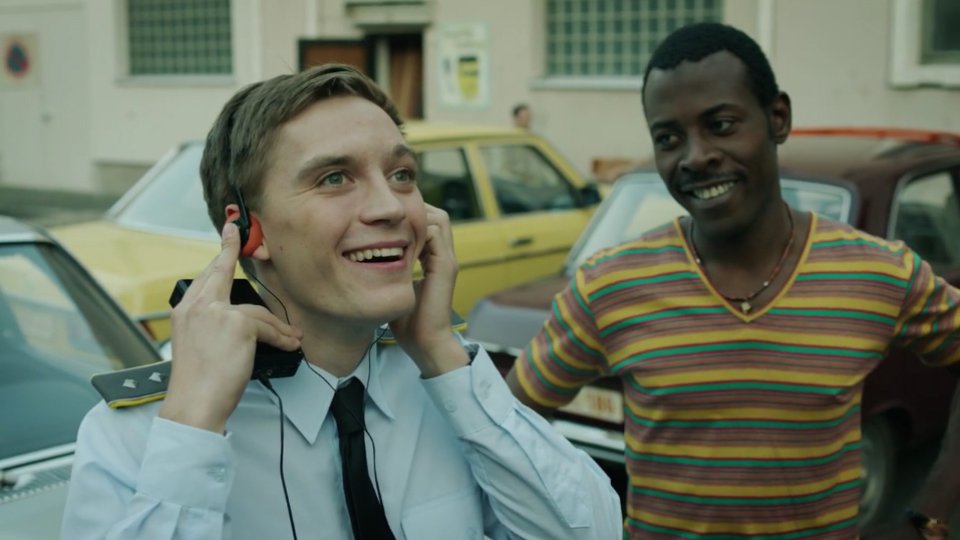 Deutschland 83 is a classic spy thriller/coming of age story set in the heart of a divided Germany. Against the background of Ronald Reagan’s “Evil Empire” speech, Martin Rauch (Jonas May) is plunged into the dark machinations of the ruthless intelligence agency, the Stasi. Promised a kidney transplant for his sick mother, he is forced to assume the identity of Moritz Stamm, codename Kolibri (Hummingbird). As Stamm, an aide-de-camp to General Edel, an official with close ties to NATO, Martin must keep his ear to the ground regarding the US’s deployment of closing long distance nuclear missiles, which threaten to surround the USSR.

Forced to lead a double life, our hero is constantly on edge to avoid being caught out in a world vastly different to his own. Covering similar ground to The Americans, Martin must navigate through a consumerist world of Art Deco furniture and Sony Walkmans. Jonas May takes advantage of his character’s naivety and sheltered upbringing to provide frequent humorous moments. Martin is frequently perplexed and amazed by the abundance of materially superfluous items. For example, when confronted with De-caf coffee for the first time, he is astounded: “It’s coffee without caffeine”, “Excuse me?”, “Coffee so you can sleep well at night”.

May skilfully depicts the mental deterioration of his character, as Martin is forced to break endless moral boundaries for the greater good of the Soviet Union. Unwilling to lose their best agent, May artfully depicts the internal conflict experienced as the Stasi dig their talons deeper and deeper into Martin, threatening the friends that he has made on both sides of the wall.

A series awash with good acting, Ulrich Noethan plays high ranking and successful official, General Edel, combining effectively with Ludwig Trepte who plays the general’s son, to present a father-son relationship that is both human and incredibly tragic. All characters attempt to cope with the escalating pressures of the Cold War, but it is Noethan’s performance as General Edel that stands out. Constantly disappointed and put down by his rebellious son, whilst slowly losing his daughter (Lisa Tomaschewsky) to a pacifistic and mystical cult, he eventually isolates his wife in the process. Throughout, Noethan’s performance resonates.

Visually the show is fantastic, shot in a selection of slate hues bringing a beautiful analog finish to a collection of 80s interior sets. A series of minimalist office designs, devoid of material luxuries, serve to emphasize a cold and detached ambience that hovers over Martin’s correspondence with the higher-ups of military intelligence.

The show also takes full advantage of 80s music. Gary Jules’s Mad World provides an acute commentary on the wider political context in which Martin is operating—an escalating nuclear arms race threatening to wipe out humanity. The dreamy tunes of the Eurthmics’s Sweet Dreams (Are Made Of This) play out as Martin encounters a West German supermarket for the first time. Finally, the series’ theme song, Peter Schilling’s Major Tom is absolutely brilliant and will have you humming after every episode.

There are some weaknesses to Deutschland 83, however, as at times character development moves a little fast. Martin, a seemingly innocent young man, with doting girlfriend in tow (Sonja Gerhardt), quickly seduces a NATO secretary, seamlessly moving on sexually and emotionally. Things escalate between Martin and the secretary until she begins to threaten his cover and consequentially incurs a gruesome accident before Martin moves on to the next West German temptress.

Any uneven character developments aside, Deutschland 83 largely moves from strength to strength. The cinematography and production values are incredibly beautiful, and pay a fantastic tribute to 80s interior design. In fact, for anyone with a penchant for anything 80s, this series is guaranteed to satisfy and excite nostalgia. A thoughtful coming of age story on the precipice of historical upheaval, this series is more than your average spy-thriller and a stonkingly good watch.

Produced for German TV, the series aired on Channel 4 and is available to watch on 4od, complete with English subtitles.