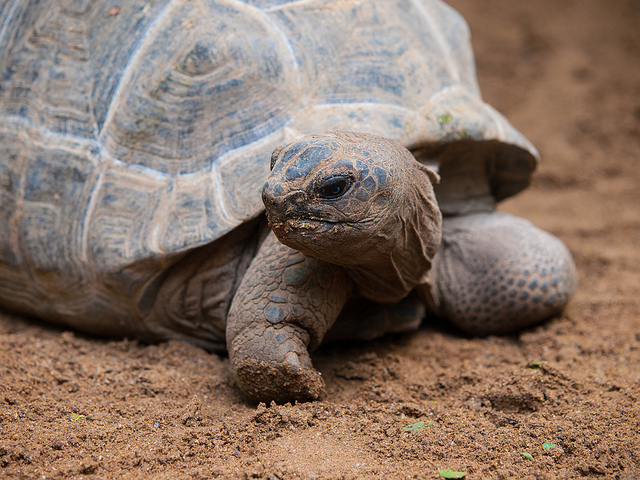 It is frequently quoted that around 70% of Durham students find their future spouse whilst studying here at university. For many, this breathes a sigh of relief – having passed the teen stage of ‘liking’ someone but being to cool/socially awkward to tell them, it seems the social lubricant of alcohol combined with the general lack of student inhibition allows for the perfect ‘pulling’ environment from which true love can flourish. If you’re one of the alleged majority, then hurray! The pressure of post-uni prowling is something you’ll never have to face. However, as many of us approach the end of our undergraduate life and venture out into the ‘real world’, we must face the harsh truth that the countless opportunities for potential love found in the Durham bubble are long gone, and one must embark upon the real life dating scene…

This brings us to Channel 4’s well timed ‘Mating Season’; I’m always partial to a good advert, so one about a lonely Galápagos Tortoise, Arthur, looking for love after the death of his beloved partner (and fellow tortoise), Ethel, was particularly exciting for me. After venturing on numerous dates, embarking upon a heavy session of clubbing and waking up alone in a park, the advert culminates in Arthur finding his new partner in the form of a bulldog in a wheelchair. Personally, I’m sold. A combination of dramas and documentaries, the season’s bizarre introduction promises to provoke an interesting and perhaps unexpected response towards the complex world of modern dating, whilst keeping us thoroughly enthralled throughout. Three episodes of the season’s first series, Dates, have aired to date. Available to watch on 4oD now, I would highly recommend giving them a go. Less than twenty-five minutes each, they are long enough to give you a teasing glimpse into the characters’ lives whilst short enough to keep you fully enthralled. Predominantly focusing on just two characters throughout each episode, the format risks becoming static, yet it is executed in such a way that it allows an intense, momentary insight into the complex personalities behind the ‘daters.’

From the first episode, we soon realise that whilst entertaining, the show begs reflection on the perceived norms of online dating. Opening within this context, we are immediately immersed in a cultural phenomenon that has arguably become more ‘normalised’ in recent years. As each episode is named after the ‘daters’, the first episode opens with ‘David’ sat at a restaurant’s table, apparently ‘blown off’ by his date. Still, this typically anticipated opening is undercut when he approaches the beautiful ‘Celeste’, a name that differs to the titled ‘Mia’. Recognising that the woman looks similar to his date’s online photograph, ‘or maybe she’s a bit younger’, the encounter subtly accentuates the lack of surety in the online world and the ease with which one can deceive and be deceived. Nonetheless, her return to the table signifies the unexpected attraction that can be revealed through such a collision of personalities. After revealing herself as ‘Mia’, the illusive figure is reminiscent a typical Film Noir beauty, yet she is given distinctly modern twists. Such juxtaposed elements of her character are found in subtleties like the E-Cigarette – whilst she is shown smoking a real cigarette, the electronic device serves to elucidate the classy sophistication of an era past whilst adhering to the modern laws of indoor smoking in public places. Such touches add humour to the encounter, as the intense focus created by the scenario allows concentration on the date and its implicit and explicit mechanics.

The primarily singular setting of the episode certainly does not detract from its emotional progression, as it teasingly reveals the potential inner-depths of the characters – without wanting to give too much away, when coupled with the second episode it appears that each ‘date’ is an isolated encounter, yet it becomes apparent that the characters lives are more intertwined than we may initially assume. This allows us to appreciate the characters from different angles and interpret their motivations towards dating accordingly. To give a brief, tantalising overview of the first three episodes would be to ruin the unexpected brilliance each episode reveals, but the realism with which the twists and turns are conveyed in a mere half hour time slot (commercial time included) should be applauded.

On reflection, perhaps if you find yourself facing the world of ‘modern-dating’ as opposed to the simple, tried and tested ‘Klute + Alcohol – Pride + Luck = Marriage’ formula that has served Durham students so well through the ages, Dates might not be the most uplifting place to start. Having said that, this series is simply the start of the ‘Mating Season’, and if this is anything to go by, its going to be a truly entertaining season of television, amalgamating to perfect blend of humour, sadness, and realism, with just a hint of elements far-fetched enough to ensure that we are sucked into this unknown world of non-uni dating, even if we want to avoid it ourselves for as long as possible.