Noémie Duneton in Television on 1 October, 2010. 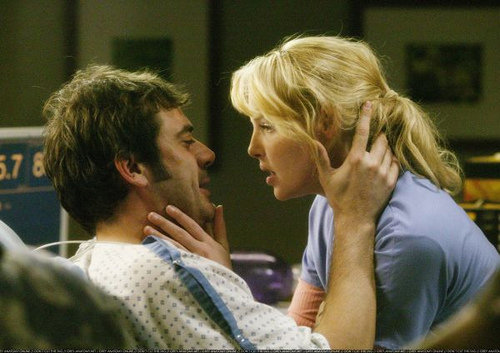 Medical TV series have always been very popular and, although they vary in style and content, they all tackle the issue of patients/doctors relationships. Indeed, from House’s questionable bedside manners to Nip Tuck’s surgeons’ sexual encounters with their patients, this theme is central to all medical dramas. Grey’s Anatomy have made a point of using this issue as a main storyline in its six seasons – and almost all of its episodes – always questioning the level of involvement doctors should have with their patients. When watching the show’s beginning (it’s in its seventh season now) you see that the five interns are very ignorant of what being doctors actually means and one can assume that their bosses know better than they do how to handle doctors/patients relationships. These figures of authority, namely Webber, Burke, Shepherd and Bailey, believe that although good doctors should be compassionate, they should not get too involved in their cases. They want interns to be cordial and sympathetic when dealing with patients but to always stay professional as well. However, it soon becomes apparent that these surgeons – Webber and the rest – do not always follow their teachings.

Furthermore, different takes on doctors/patients relationships are presented in the show and are sometimes proven as legitimate as the authoritative one, if not more. Indeed, several interns disagree with this cordial / impersonal view. Alex and Cristina (for example) agree with the zero involvement policy but go even further in thinking that politeness and cordiality are not required to be good surgeons. In “Raindrops keep falling on my head” [Season 2, episode 1], for example, Alex knows neither the name nor physical characteristics of his patients, but only their diseases. In the very same conversation, on the other hand, Izzie remembers not only her patients’ name but also their hair colour and other trivial details. Katherine Heigl’s character gets involved with each and every patient she treats, starting at the very beginning of season 1 with the Chinese illegal immigrant [S1, E2] and reaching its high point with her cutting Denny’s LVAD wire in order to move him up the heart donor’s list (he is a patient who becomes her fiancé whilst being treated by her). When Bailey, her resident, reprimands her for being “personally involved” with patients Izzie defends her involvement stating that she is “both … a surgeon and … a person who gets emotionally involved” [S3, E12]. In her mind, being involved does not make her a weaker surgeon but a better one.

Even though the characters all firmly defend their beliefs at the first, they are all proven wrong one by one. Bailey tries to resuscitate Jeremiah, a long-time patient of hers, for an extended amount of time after he dies in surgery and is then seen calling his parents in tears [S2, E4]; she is emotionally attached to a patient despite her belief that a good doctor should not get too involved. The cordial/detached theory is further challenged every time relatives or friends of characters are admitted to the hospital. Although the characters are not supposed to treat the person in question – Meredith is not assigned her mother’s case, for example – they have a hard time separating their concerned selves from their doctor selves. And when it does happen that characters treat relative or friend, things get even more complicated: when Derek disagrees with Addison regarding their mutual friend Savannah’s treatment, it’s hard to know if he does so as a doctor or a friend. He is involved in the case in a way that undermines his view of doctor/patient relationship.

But this theory is not the only one to be questioned and Alex also betrays his own belief on several occasions. In “Enough is Enough (No More Tears)” he discloses personal information about his family to help a teenage boy decide whether or not to donate a kidney to his abusive father in order to save him [S2, E2]. He also becomes romantically involved with patient Ava later on in the show. These two theories are also challenged every episode as even the characters who try to avoid emotional involvement with their patients eventually fail, usually because the patients struggles often mirrors their own on some level. Indeed, the case that brings Addison to the hospital involves a pregnant woman whose husband cheated on her, and Addison requests that Meredith work with her [S2, E1]. Not only does the patient’s life mirrors their owns (Addison cheats on Derek in New York and he, in turn, cheats on her with Meredith) but it also leads to the scene revealing that Addison cheated on Derek first. When the patient refuses to be treated by Meredith because she believes Addison to be the wronged woman and thus identifies herself with her, Addison tells her – in front of Meredith – that things are far more complicated.

The construction of the show itself thus tends to demonstrate that not getting involved isn’t the best way of dealing with patients. Furthermore, Izzie is the character whose theory is the less challenged over the course of the show. She does realise that being too involved with patients can be dangerous as a result of the Denny Duquette’s storyline as well as the experience she has when treating the quintuplets. This is when Addison tries to teach Izzie the consequences of personal involvement by putting her in charge of baby Emily without telling there she has no hope for survival; Izzie is crushed when the baby dies on her watch [S2, E11]. However, Izzie is still usually proven right in the way she handles doctor/patient relationships, when she shares with her pregnant low-income teenager patient the story of her own teen pregnancy and her decision to put her daughter up for adoption, for example [S2, E15]. On this occasion, her closeness to the case is shown to help the patient even is she does cross a line.

Although it is natural and expected from a medical show to create different interactions between doctors and patients, in Grey’s Anatomy it goes further than mere storylines. The issue of doctor/patient relationships in the show is a reflection on ethics, on where doctors should draw the line when treating patients. Moreover, it deals with an issue doctors have to deal with in real life. The fact that Grey’s Anatomy seems to side – or at least for the time being (who knows what will happen in season 7) – with Izzie’s perspective on involvement is very significant. Tangling up the lives of doctors with that of their patients is a way of making doctors in the show, as well as in reality, appear more human and not too detached. Moreover, it reminds the characters, and the viewers, that, despite their skills, doctors face the same struggles as everyone else; that although they may wish to merely “cut, suture and close”, at the end of the day they do “remember what it means to think like a human being” after all [S2, E1]. It is also humbling for surgeons in the show (and should we say in general?) to see that they are not that different from their patients, that despite their knowledge of surgical skills (cut, suture and close once again), they are still learning to be good doctors and to balance compassion and involvement. However, this position on personal involvement also comes across as melodramatic at times and, as viewers, you wish these doctors would stop interfering with their patients’ lives so much. And some patients in the show do aspire to more privacy and focus from their doctors. Stu Vargas, for example, does not enjoy George’s rambling about life’s miracles when the miracle in question is his failed suicide attempt. Indeed when Stu jumps from a rooftop and lands on a pigeon only feet away from George, the latter believes it was an accident and considers it a miracle that Stu suffers no serious injury and did not land on him [S2, E8]. As the show starts its seventh season, one can only wonder what will happen between these famous surgeons and their no-less famous patients.