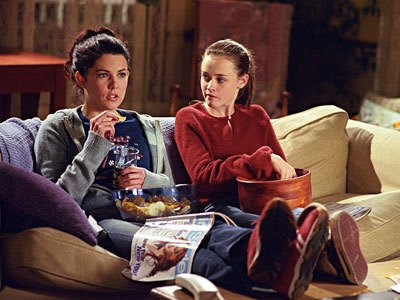 The Gilmore Girls in their natural habitat.

If you’re an avid TV watcher, there will always be the one show that started it all and sucked you in. That one show that you accidentally stumbled upon at 3am when you couldn’t sleep, and so you thought it would be a good idea to watch TV on mute. Little did you know that once the credits started to roll, you’d be thinking about buying every single episode, proceeding to spend your summer catching up. No? Well then, it must be just me..

Amy Sherman-Palladino’s Gilmore Girls made its debut in the fall of 2000 and ran for seven seasons. The beautiful show follows a single mother, Lorelai Gilmore, and her 16 year old daughter/best friend, Rory Gilmore. Lorelai is brought up in a privileged world of vineyards, debutante and cotillion where she spent every year in a rebellious phase. When she becomes a mother at 16, she ups and leaves that life in Hartford to make one of her own, ending up in the quirky town of Stars Hollow. I know what you’re thinking: oh no, not another show about teen pregnancy. It’s not. Lorelai didn’t just “get by” in life – she made it. The show follows them in their triumphs and downfalls, from Rory moving to a private high school to graduating from Yale University, and Lorelai’s transformation from her parents’ world to standing on her two feet. Just like any family dramedy, it features ridiculous amounts of coffee, the word ‘oy’, backward baseball caps, a hilarious rude Frenchman, town meetings and politics, Friday night dinners and fast-paced dialogue (read as: love, ambition, work, education, family).

Now, these women are just a part of a package deal, with the colourful characters of Stars Hollow and Lorelai’s parents being part of that deal. Lorelai’s difficult relationship with her parents is central to the show, and the Friday night dinners were always a highlight. The town Rory grows up in is portrayed as a close-knit community, with everyone seeming a little unhinged. Whether it’s Taylor Doose’s absurd laws, Kirk’s different jobs, Miss Parry’s dance rehearsals, or Luke’s unwillingness to participate in anything, there was always something comical and unusual happening. The setting easily created a cocoon for the show and its characters – a cocoon that protected it from anything real that would taint its fantasy.

Gilmore Girls soon had a cult following and it has the insanely quotable, witty fast-paced dialogue to thank for it. As someone who used to visit a speech therapist because I ‘ate’ half my words due to how quickly I talked, this made me feel better. As if watching Lorelai and Rory frequently ranting at each other in the form of a quick rambling monologue wasn’t enough, it would also be laced with an unrealistically high number of pop-culture references. It would overflow with intertext and metatext – things I never understood the first time around, but here’s the thing: you didn’t have to. It worked. One of the few things I learnt about television from Gilmore Girls was to not over-think it, because it just works! But this is exactly why it is such a perfect show to watch over and over again – there was always some famous pop-culture reference, historical figure, famous literature and popular music you had missed under the layers and layers of allusion. This wasn’t some running gag that they did; they were part of the characters lives. It would be all so casual – too casual – to have knowledge of iconic John Hughes scenes, Henry James’ Daisy Miller, Ruth Gordon, let alone be able to weave the popular and the obscure together (The Thing From Another World, anyone?).

The girls were also avid movie and TV watchers, readers and big eaters. It was how Gilmore Girls established itself as a fantasy – Lorelai and Rory ate more in a day than I ate in a week and they didn’t gain a single pound. And the fact that no one in the real world could possibly communicate the way they did, but don’t let that fool you into thinking that I didn’t try. There are hundreds of websites dedicated to the Gilmore Girls’ book lists, TV, and movies they watched, music they listened to and the references they made, and it’s never-ending. They’re still being updated! Yes, the dialogue is a fantasy, but a fantasy that I so desperately wanted to be part of – one of my personal goals is to be able to cross off everything on Rory’s book list. To know so many, many different things – I can’t even comprehend it. I wanted to be them.

What would a TV show be without romance? Like any teenager, Rory had her classic first love (Team Dean), the bad boy (Team Jess) and, well, Logan but we don’t go there. Really, all anyone ever needs to know is about Jess. As much of a clichéd bad boy as he was, he was also surprising. How many stereotypical bad boys do you know that have read Allen Ginsberg’s Howl multiple times? By the way, this is the moment you’re supposed to fall in love with him. Lorelai also had her fair share of romantic entanglements but, once again, the only one anyone ever needs to know about it is Luke. It will always be endearing how he’d show his affection through deeds instead of words, such as pouring her more coffee even though she’d already had five cups.

While Lorelai’s flaws were more obvious, especially her in-your-face immaturity, people criticised Rory for being almost too perfect. I disagree. Just because she was obedient, driven, loved learning and didn’t rebel, doesn’t mean that she didn’t have her imperfections. They were deeper and more complex and it made her a stronger character. It was a nice change to have the main teenager in a show not be a train-wreck, but someone we could actually look up to – I know I did. It’s been a long running joke that every character on the show was ‘cooler’ than Rory, but I think that was her appeal. I found it easier to relate to her than to the melodramatic teens of 90210. I’d definitely be more excited about a Birkin bag because it smells like a new car than because it is a Birkin bag.

I’m not going to lie. Three years after watching the series finale, the duo are still my heroes. I refuse to talk about how it isn’t the norm to have fictional television characters guide how I make my life decisions. They taught me what it meant to be ambitious, to embrace my addiction to coffee wholeheartedly, and that family is always going to drive you crazy. Oh, and, that you can’t watch Willy Wonka without massive amounts of junk food.