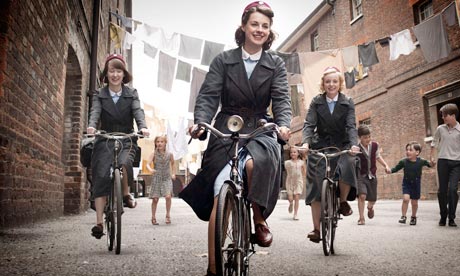 The final episode of Call the Midwife aired this weekend. I admit it, I am a fan. I’m a period drama lover which is partly why I tuned into the first episode, that and the intriguing promise of Miranda Hart doing ‘serious’ acting. Call the Midwife has had a great first series. The BBC has been churning out some diverse and impressive literature adaptations recently, from a modern Sherlock to Great Expectations with Douglas Booth as the prettiest Pip yet. Jennifer Worth’s relatively obscure trilogy of books has now been catapulted into the limelight and I’m pleased the BBC took the effort to adapt it. Call the Midwife is Worth’s memoirs of her experiences as a young midwife in the East End of London in the 1950s. It is a premise that could either bore or cause squeamish viewers to faint; or it could be an inspiring, enlightening and brave adaptation. In my view, it is definitely the latter.

I call this adaptation ‘brave’ because it has presented some controversial topics in a family friendly context. Storylines in each episode have covered topics such as incest, adultery, dementia, sexually transmitted diseases, cancer and prostitution. All of these topics have been sensitively presented and are all the more poignant considering that they are based on true stories. Perhaps this is Call the Midwife’s greatest strength. The stories leave the screen and enter the imagination and heart of each viewer. We are left wondering what happened to Mary, the young Irish girl whose baby was put up for adoption because she was under 16. This is the story of a real woman, perhaps still alive. While other popular programmes have carefully constructed plots and script writers ready to change the fate of a character at a moment’s notice, with Call the Midwife reality breeds unpredictability and pathos. This leaves the viewer in agony over whether any characters will truly have happy endings, fairy-tale endings do not always occur in real life as we well know. Nurse Chomolondely-Browne’s dilemma in the last episode, and her thoughts of becoming a nun instead of marrying the man she loved was a truly scary moment. How often in real life do people make choices like this and lose out on the happiness before them. Since it was based on reality, I knew that it wasn’t necessarily going to work out how I wanted it to for her and her man. The relief when she did marry PC Noakes was all the more satisfying because of this tension.

A bright spot in the acting of this series has to be Miranda Hart playing Nurse Camilla Chomolondely-Browne, known as Chummy. Hart’s role did include comic moments but her understated acting of a sweet awkward woman going against the wishes of her privileged family made her a lovable character. She didn’t overact and it was great to see her in a serious drama role in which her character shined through without the hyperbole associated with her comedy series Miranda. Another actress who stood out was Judy Parfitt playing the nun Sister Monica Joan who was struggling with dementia. Parfitt managed to show the almost child-like innocence and confusion of Sister Monica Joan, while showing how clever and devious she was too as she stole cake from the other nuns and trinkets from market stalls. All of the actors were well cast, and though I didn’t think the heroine Jenny Lee was the most outstanding character in the cast, I was still interested in her life and emotions and felt connected to her as the narrator. Of course, the acting would be nothing without believable sets and I thought that the BBC did a great job depicting the dirty, busy streets of the East End. The costumes and props were well-made and nothing I noticed severed the illusion of 1950s London.

Call the Midwife has more than enough gentle humour and likable characters to satisfy viewers and tick the boxes of a good TV program. However the real power of the series goes beyond great acting and inspirational depictions of overcoming hardship. It even goes beyond the satisfyingly realistic prosthetic new-borns and births that made me grimace with sympathy for the mothers. The power of the series is the small realisation in the back of every viewers mind: ‘This is real!’ This generates sympathy with the characters and an admiration for the unrecognised midwives and nuns who actually lived out the situations that are acted for us. Until this programme and the book, the only memorial to them was the memories of countless mothers and grandmothers who remember the day their child was born. Call the Midwife has been a wonderful series with great acting and surprising storylines. Thankfully the story hasn’t finished yet; there will be a second series and I will definitely be watching it.