Breaking Bad: A Tale of Corruption 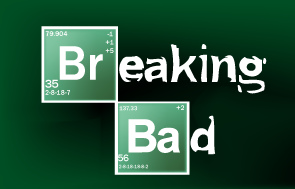 The concept of AMC’s Breaking Bad is not exactly what you would call a naturalistic one. Middle-aged chemistry teacher Walter White (Bryan Cranston) whilst undergoing a mid-life crisis and working two uninspiring jobs, is faced with the fact of his own finality when he is diagnosed with inoperable lung cancer. So far, so plausible; but what stretches believability is Walt’s decision to use his chemistry experience to start cooking crystal meth with a drop-out ex-student in order to ensure his family’s financial well-being after he passes away. All of this is established in the first episode and luckily the breakneck pace, lush cinematography and retrospective approach to storytelling invite the viewer to take a blind leap of faith towards accepting this chain of events as a given.

For once this instrumental backdrop is in place, the show can focus on its real subject matter: the corruption of its central character. Aided by the fact that Cranston was best known for his role as Hal, the dad in Malcolm in the Middle, (Breaking Bad has now arguably usurped that throne) his slide into the criminal underworld is made all the more compelling and impressive given the seamlessness of its execution. There are certainly moments we can pinpoint where Walt acts reprehensibly, but initially the change is gradual; revealed through minor taboo-busting behaviour such as talking about schoolgirls’ bras at the breakfast table or seducing his wife Skyler during a PTA conference. With these seeds of corruption sown, as any up-to-date viewer of season four will attest, we are now greeted by a startlingly different Walter White.

The main issue hovering around Breaking Bad is that of greed and the profound effects it has upon personal integrity. The catalyst for Walt’s downslide is certainly economic but fraught with moral ambiguity; whereas Walt initially cooks meth to pay for his cancer treatment and provide for his family, avarice soon becomes an end in itself. I’d just like to note here that Breaking Bad proves itself to be a show bound up with typically American concerns; the privatisation of healthcare plays a major role in Walt’s decision and as a result the show literally couldn’t be set in certain other countries. In having these good intentions, Walt becomes somewhat of an antihero, doing bad acts with good intentions; a Dexter-like figure if you will. However, whilst Dexter has a code of ethics and only kills killers, Walt is arguably worse; pumping out meth indiscriminately into the community. Later, Walt certainly crosses into villain-territory when he starts to use these ‘good-intentions’ as a mask; as a mode of self-deception to justify staying in the drug game.

As a counter-point, we have Jessie (Aaron Paul), Walt’s meth-head ex-pupil, who as Paul says “was happy dime-bagging it” before Walt came along. Initially unlikeable, Jessie soon becomes the heart of the show, fostering good intentions to stay off drugs and avoid Walt’s controlling grasp. Jessie’s good-natured stupidity is also essential to bringing the humour in this often serious show. Trapped in the desert whilst cooking meth, Walt and Jessie have to get resourceful in order to jump-start their RV. After being sent off by Walt to find a list of components, a crazed Jessie asks, “What are we building?” and as his eyes light up, “…a robot!?” It’s all the more surprising to hear that the show’s creator, Vince Gilligan, planned to kill off Jessie at the end of the first season. Had he done so it would have been a much greater task to sustain interest in the series, for once Walt becomes more of a clear-cut villain, our attention refocuses on the supporting cast, with their character arcs becoming the structuring principle of the show.

On this note, it is impressive that almost none of these characters’ storylines act as filler; even a seemingly side-lined affair between Skyler (Anna Gunn) and Ted Beneke in season three fuels an absolutely devastating episode finale in season four’s ‘Crawl Space’. It must be said, the ten-minute finale of this episode is one of the most effective pieces of television I have seen in a very long time. Watch in the dark with a surround sound system and it will have you pacing the room like a crazed loon. Well, maybe that was just me…

In a way, Breaking Bad’s latest season has been more about action than development. Plot-wise this is completely justified, since the central focus of season four is a deadlock between Walt and his distributor Gus Fring (Giancarlo Esposito). But truly this season heralds Breaking Bad’s coming of age. Vince Gilligan, as an avid fan of spaghetti westerns and gangster movies à la The French Connection, has free play here to operate purely on the level of the criminal underworld. If the preceding seasons charted a process of corruption, then season four revels in the murders, double-crossings and verbal barrages of the utterly corrupt. And strangely, the artistic flourishes which set Breaking Bad apart from the pack in the earlier seasons remain ever-present despite the scale of the plot having swelled considerably.

As to be expected of a show about cancer and criminal life, Breaking Bad is set to wrap up with a nice finite conclusion. Gilligan has currently just opened up his writers’ room for season five (declared to be the final season) which is billed for a 2012 release date. Expectations are rather high based on the strength of season four and with the way things were left at the season finale there are many potential repercussions to be explored. I’m sure many of you will be waiting with bated breath and for those who think they may enjoy the show, well, you’ve got plenty of time to catch up. Breaking Bad has proved remarkably consistent throughout its four seasons and I have encountered few shows that manage to maintain believability whilst simultaneously providing blistering edge-of-your-seat thrills. For my money, it is worthy of sitting alongside some of the greatest HBO giants of recent years.

Season One of Breaking Bad is .