Boomtown: truth as a puzzle

Martin Winckler in Television on 29 October, 2010. 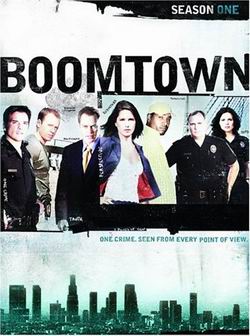 The following piece was first published in the 15th issue (January 2004) of the now defunct French magazine Episode.

Aside from the fact that Boomtown is so visually striking (it was shot in 16:9 and HDTV but displayed in 4:3 on TV), what set scriptwriter Graham Yost and director Jon Avnet’s show apart from other TV series generally broadcast by networks, is its elegance and sophisticated narration.

Contrarily to what is usually written about it, Boomtown is not a crime drama narrated “from the viewpoint of its characters”. It is actually the opposite. Its episodes are composed of the intertwined actions of its seven main characters, sometimes narrated anti-chronologically.

Each excerpt, introduced by the character’s name written on a black screen, follows one of the protagonists’ itinerary (or alternatively that of the victim, suspect or culprit) that appears to be the “personal narration” of a fraction of the events. The succession of these narrations, in turn, constitutes a whole that gives the fragments their meaning.

However, the elaborate construction of each episode is not merely the product of a succession of sequences. Indeed, Boomtown’s originality and narrative beauty arises from the decision to place one sequence prior to another and the specific order in which these sequences are given to the viewer.

Thus, the inaugural scene of every episode (in the pilot the old man addressing the camera stating that every big city has its river, yet L.A. only has an open-air sewer; the truck charging into a suburban house; the telemarketer hearing a shooting through his headphones; the undercover cops watching a man leaving his house) is also a fragment of the narration and not just a teaser. Indeed the scene does come back during the episode and is usually completed.

This inaugural scene is chosen and shot with great care, in order to constitute, so to speak, the one thread coming off the ball of intertwined narratives… or the first piece of a narrative puzzle that is laid down, piece by piece, for the viewer by the scriptwriters, progressively revealing what the characters actually did and what their motives were.

In numerous TV series, the closing sequence is usually a conventional scene where characters part after exchanging some good words or – as is quasi-ritualistic in Law & Order/New York District – a dark and ironic conclusion. In Boomtown, the final scene is the missing piece added to the puzzle.

Here (and especially in the pilot), it concludes the narrative by sending the viewer back to its starting point as well as providing the episode with a great emotional intensity. On occasion (in the fantastic fourth episode – “Reelin’ in the Year” – for example) it also gives the viewer a “key” to which no one else has access and that sheds light on all that preceded it.

Far from demonstrating sophistication for the sake of it, Boomtown is a delicate work, full of intelligence and sensibility, where the real topic is… the point of view of the spectator. The show reveals that human truth is complex, that individual perception is always fragmentary (and often inaccurate) and that reality is never reduced to what one thinks he saw but has to be reconstructed – like a puzzle – thanks to a combination of patience and feverishness.

In short, it is a superb show, moving even for the most demanding viewers. It is a pity that only 24 episodes were produced – NBC cancelled the show due to low viewing figures. However, we should be pleased that US television, despite (or thanks to) its commercial obligations, is able to offer such works, far superior to most current film productions.

A word about the author: Martin Winckler is a famous French writer, GP and TV Series critic. His most famous book has been translated into English under the title .

Buy the DVD at Amazon: