Out of the Blue: Blue Planet II returns after 16 years

Blue Planet is back, and the first episode was nothing short of spectacular. Opening scenes of magnificent waves, curling in slow motion, set the scene for an hour of classic deep-sea drama, featuring stunning visuals of the weird, the wonderful and the incredibly poignant.

Attenborough explained from the offset that new technologies, including megadomes and tow-cams, were built to film this series; this certainly led us expect remarkably high definition. Nothing could have readied us, however, for sheer scale of production, which took over four years to produce, in 39 different countries. Filming involved 6,000 hours of underwater diving, and production manager Katie Hall admitted five babies were born to crew members in the time it took to shoot Blue Planet’s long-awaited sequel.

The opening episode certainly highlighted such scale, and made excellent group-viewing; myself and my housemates backed the various critters’ oceanic endeavours in a football-fanatic manner. We felt the frustration of a crafty tusk fish who repetitively smashed a clam against some coral in an attempt to find dinner, and cheered collectively when his resilience was rewarded. In a similar fashion to the ‘racer-snake lizard’ showdown of Planet Earth II, we also cried with relief when a fledgling tern narrowly escaped the jaws of a giant trevally fish. Such drama was of course heightened by the music of Hans Zimmer, which set the tone of each scene in an intense but consuming manner.

In addition to the well-loved hump-back whale, orca and bottle-nose dolphin, we also witnessed the plights of some lesser-known species, the most bizarre being the kobudai fish.  We watched in awe as the female transformed into a male in order to further her DNA – no big deal, right? This extraordinary feat provoked a particularly insightful remark from a housemate, who proclaimed in her amazement “gender actually means nothing”.

There were naturally some heart-wrenching moments, too. While the first series of Blue Planet (2001) was criticised for avoiding environmental issues, the opening episode of Blue Planet II initiated a promise to address the increasing damage inflicted on our oceans.  As a mother Walrus unsuccessfully searched for a resting spot with her pup amidst melting ice caps, the message was clear: human activity was destroying her habitat. This was tastefully done, allowing a shameful reflection without being unnecessarily upfront. 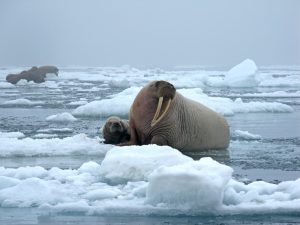 We were also treated to a concluding ten-minute insight ‘Into the Blue’, learning a little more about the production process. From probe cameras used to spy on tiny creatures, to suction cameras which filmed life from a ‘giant’s eye’, the array of technology used to film Blue Planet II was vast. The low-light filming of sting rays as they swarmed through plankton (invisible to the naked eye but electric blue on film) was fascinating to watch and highlighted the definite artistry in capturing nature. We also saw cameraman Chris take to the seemingly perilous South African waves, on a jet-ski, in an attempt to shoot bottle-nose-dolphins (who surf for the sheer fun of it, did you know?). His laugh seemed a little too forced when asked how he was feeling about his precarious venture!

We can undoubtedly expect more outstanding scenes to come from the remaining six episodes of Blue Planet II, with further references to environmental impacts on the ocean and its inhabitants. The viewing experience certainly feels like you’re part of a fantasy world, and knowing what you’re witnessing is actually occurring in 97% of Earth’s water makes the programme all the more eye-openeningly marvellous.