Black Mirror: Too Much Deadpan?

Amber Matthews in Television on 16 December, 2011. 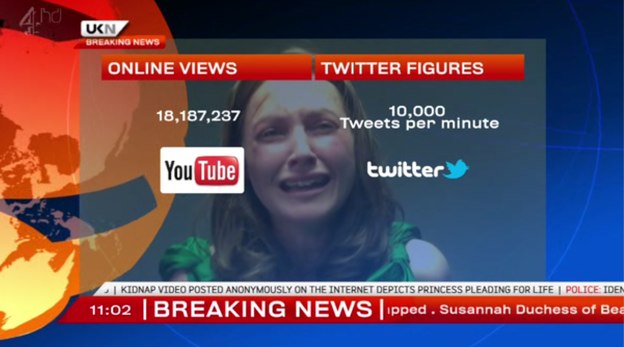 This list is probably a familiar inventory of modern digitized living to most readers… except that last one. And yet in the first part of Charlie Brooker’s provocative mini-series Black Mirror, entitled The National Anthem, this act of bestiality, performed by none other than the programme’s fictional Prime Minister, becomes an inexorable product of the world of pushy media and instant-access information that we inhabit. A Turner-Prize winner kidnaps a popular princess, with this repellent event as his ransom demand. It cannot be denied that this “twisted parable” (as described by the 4oD bio) is a brilliant piece of commentary on the power of the digital world to create the absurd, as the politicians gauge public opinion through Twitter trends, and worry about hourly results of polls. It also brilliantly exposes the potential of the internet for channelling the deviant side of the collective human psyche, and the exaggerated emotional attachment we tend to form with celebrities, particularly ones that have a nostalgic, domestic image, such as the kidnapped Princess Susannah (much like a real-world Kate Middleton). But somehow, on reaching the credits, I was not left feeling militant about the problematics of globalized networks of technology, or even sensitive to the ironies of modern living, but simply feeling a bit sick. In fact, actually quite disturbed… from a programme originally aired at 9 on a Sunday evening – barely post-watershed. And this is coming from a long-haul Dexter fan.

It is not the graphic content or even graphic concepts that I have a problem with (as you don’t, of course, see any “pork swords” onscreen, to borrow a Guardian pun); it is rather the disturbing way in which the premise becomes utterly believable. Both the Guardian and the Telegraph praise it for this – for the deadpan style in which the (admittedly excellent) actors execute their roles, claiming that this adds to both the irony and the humour of the show. Rory Kinnear plays a familiarly harassed and slightly pompous PM adeptly. Lindsay Duncan touches on comic moments in her role as press secretary from the very start, such as her understated hesitation at the PM’s instinctive refusal to comply with the terrorist’s nauseating demand. But it is this very seriousness of performance that ultimately makes the bizarre plot so credible, and therefore so unsettling.

The Telegraph describes The National Anthem as a “shocking but ballsy, blackly comic study of the modern media.” Likewise, the Guardian commends its balance of genre as “nine parts satire to one part dystopia.” But I would suggest that terms such as “black comedy” and “satire” are thrown around far too much. In the end, this show is simply not funny. In any sense. The all-too convincing look on the PM’s face at the climax (excuse the uncomfortable pun) is enough to dispel any chuckling that may have been in the room. It is, in reality, a gutsy but repulsive political thriller. Acute, perhaps; witty, almost. But never funny. After watching, it took several hours of the harmless Frozen Planet and comforting Peter Pan before I dared go to sleep.

I’m sure that by arguing this, I will receive replies claiming that I clearly have an ill-adjusted sense of humour and have missed the point. But I think perhaps I got the point a bit too much – and that anyone at all sensitive to the mood and tensions of a well-constructed TV show would agree with me. The society it depicts is one that works by abbreviations and buzz words. By hash-tags and symbols. A politician being coerced by terrorists into having sex with a pig would be funny in a newspaper cartoon – think of the associations a ‘pig’ carries with Capitalism and corrupted authority. And of course debased sex has become a familiar trope, particularly in comedies. And yet in the deadpan performances in The National Anthem, we aren’t given room to laugh, and so the act fails to become comically symbolic. Instead, it is nigh-emetic.

However, if we ignore the billing of it as satirical or darkly comic, and consider it instead as a vision of political dystopia extrapolated from the world we live in, it is utterly brilliant. In spite of requiring a strong stomach from the viewer, or perhaps because of this, it raises some questions about global culture that are hard to ignore: do we live too much in a digital world? Is this world opening too many doors into the unpleasant side of human nature? Does it stop us from empathizing with others? Can we be manipulated so easily into debasing ourselves? Are we in control of our lives at all? The range of dilemmas it raises is broad; some of these questions are uniquely appropriate to today, some were probably asked by the earliest of civilizations.

At the time of writing, the next part has yet to be aired, but I hope Brooker manages to gauge the tone and balance the comic and serious elements a little more successfully next time. Either that, or the second one should come with a warning label: “Do not consume with a weak stomach.” If it was nothing else, the first episode was an interesting experiment in genre with surprising results: too much deadpan, and the comic shifts towards the disturbing.