Birdsong Doesn’t Quite Take Off

Rebecca Murdoch in Television on 10 February, 2012. 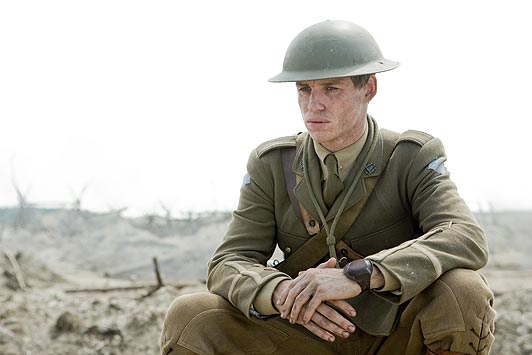 Perfectly polished or a little too trite?

The opening shot of Birdsong is a 30 second reflection of what the viewer can expect for the next 3 hours – an intense stare, a slow sweeping camera shot and epic yet beautiful music. But are these traits enough to carry a 3-hour drama? As the illicit affair unfolds between our supposed hero Stephen Wraysford (Eddie Redmayne) and the enchanting married heroine Isabelle Azaire (an ever stunning Clémence Poésy) via the medium of flashbacks, we are also taken through key stages of the First World War. Birdsong makes for a good BBC drama, but there seems to be something lacking. Originally a beloved novel, it seems, as with many adaptations, that the TV version falls slightly short of the modern classic released in 1993. I must confess to not having read the book, so any comparisons are not my own.

It is always difficult to move a book into the film or TV domain, and for the most part Abi Morgan did a grand job. The love story is told well and the characterisation is solid, but I can’t help but feel a certain transparency in the plot. Let’s all be honest, hands up anyone who actually thought he was dead at the end of part one? There was a whole part to go! And did anyone really not see the death of his beloved Isabelle coming? I have been informed by readers of the book that these subjects are approached in a more subtle manner in the novel, leaving the reader guessing a lot more. Having said all of this, there were some interesting plot turns, which were indeed well concealed until the last minute. I for one could never have guessed that Isabelle left Stephen because she was pregnant, and when Weir gets shot, my mouth quite literally dropped.

As with most BBC period dramas, the costumes are very accurate, as is the scenery of rural France and so are the battle fields (although the fact that it was filmed in a desert was all too obvious). To my knowledge the actual history of the war is also accurate, however I felt that the Battle of the Somme was dealt with in an all too clinical manner, with only the music creating the tension that was needed. I did not get the sense of the hoards and hoards of men being sent over the top wave after wave, and was not altogether sure how Stephen made it back to camp quite so easily. I was fully prepared to get very emotional in that scene, but the effect was dampened due to the soldiers reading aloud their letters to home over the top of the battle. A trite and slightly irritating effect that should have been replaced by a larger focus on the devastating outcome of the actual battle.

The letter reading is not the only corny scene in Birdsong. The zooming in of the vicar during the Battle of the Somme, who is weeping; ‘my poor boys, my poor boys’ is almost unbearably cringeworthy. Who is this random vicar that we have never seen before? And why is he getting any attention over those ‘poor boys’ on the field. Another example is the repetition of Firebrace’s last words ‘there is nothing more sir, than to love and be loved’ when Stephen is standing over his grave. This not only cheapens the death of poor old Firebrace, but also the overarching message of the whole program.

The characterisation was based mainly on looks and embraces, with entire shots dedicated to just one moment between our two tormented lovers. However the love story is created with convincing aplomb, as are the very graphic sex scenes. Eddie Redmayne is superb, capturing the intensity and the turbulent mind of Stephen Wraysford with wonderful accuracy. His penetrating stares were the epitome of a lost soul. However this is beside the point. The cast as a whole did extremely well, especially considering how little script there was to work off. All credit must go to the sensational score by Nicholas Hooper, which certainly carried many of the scenes, and gave the slow moving script some momentum.

Despite some of the subtlety of the plot getting lost, and a few corny blunders Birdsong was overall what I would call a ‘good watch’. Whilst more focus on the Battle of the Somme would have been nice, there was enough heart wrenching material to be a true representation of a relationship doomed for heartbreak, set during one of the hardest times in English history. Full credit is due to the composer, the actors and the costume department, but I feel some of the directorial decisions were questionable (why was the vicar necessary?!). Whilst I will not be rushing to watch Birdsong again with any immediacy, the book is now sitting on my bedside table.