Noémie Duneton in Television on 18 February, 2011. 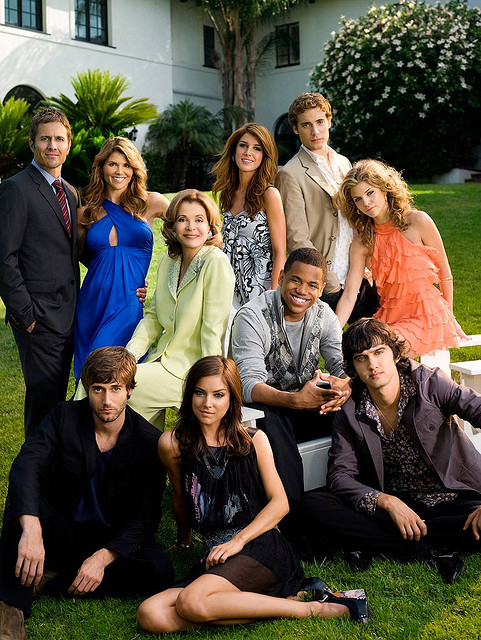 I’m kind of a series-addict and one of the things that gets to me is the number of series that I don’t have time to watch. I mean, between my degree and bringing you The Bubble TV series section, I barely have time to watch series myself. Perversely, I spend the little free time I have watching shows I already know (yes, I will admit I’m in my second consecutive viewing of Gilmore Girls!). So today, I’ve decided to talk about five shows I’ve heard a lot about, two of which I would very much like to watch (but don’t have time to) and three I’m glad I don’t have time to watch. So here it is: my totally biased and badly informed opinion.

Well obviously there is the handsome actors. I guess it’s very girly of me but I believe Wentworth Miller to be one of the main attractions of the show. But beyond that I think filming inside a prison is both original and (potentially) polemical. Indeed, not only is prison a taboo space in a society, but being controlled by the state, the way prisons are managed says a lot about a government. Plus, I’ve heard that some of the protagonists are genuinely bad: rapist and paedophiles, which I think is very clever as we usually focus on “good” people. So this gives me hope that Prison Break is a ground-breaking series, but maybe I am mistaken and it is really about half naked tattooed guys.

In Treatment, which focuses on a psychotherapist’s different patients, is not as well known as it ought to be – in my (totally uninformed) opinion. I’ve heard so many good things about it but what attracts me most is the treatment of time, as all the viewer gets to see is the therapy sessions. The ones of Paul Weston’s patients and his as well, as he seeks another therapist’s help to deal with his work – can you spell irony? Most shows depict characters not only in their work environment but also in their everyday lives, which gives you two very different kinds of information about them. Indeed, if you get to see how they act in public and in private, the differences you can spot between the two create well-rounded characters. But I think that limiting the viewer to the set time and space of the sessions is genius. Indeed, the viewer only sees the characters in what is supposed to be a very private moment but, as it turns out, the patients are still very much acting when they’re speaking with their therapist. In a way, the viewer is put both in the place of the analyst and the patient.

I’ve never been into mystery stories, neither in book, films or anything else really, but this show seems to be especially bad. I mean, even fans of Lost have told me that it stopped being good – and making sense – at the end of season 2. And there are six seasons! And who wants to watch people stuck of a weird island that allows time-travel anyway? I caught a glimpse of one episode on TV last summer and not only was the acting terrible but the whole pseudo-mystic atmosphere bored me. Maybe I’m being too harsh, and maybe the show is not as bad as its own trailers, but it really doesn’t appeal to me.

It looks like this is a mix of Gossip Girl, Desperate Housewives and I Know What You Did Last Summer. Or in other words: the worst series ever. Basically, Pretty Little Liars focuses on a group of five teenage girls and one of them – Allison – dies in mysterious circumstances. A year later (which is when the series is set) she is found dead but her former friends begin receiving messages signed A. And yes, that seems to be the whole extent of the plot. I’ve seen some posters and trailers and it really looks like four pretty (in a very standard way) and utterly stupid teenage girls projected into a horror movie. The only attractive thing is the credits. But that’s not enough to hook me.

After Privileged and Gossip Girl, the CW presents you with another show about privileged rich kids: 90210. As if we hadn’t had enough of their pathetic and superficial problems. Amusingly, members of the previous Beverly Hills, 90210 cast joined this new version, playing their former characters’ older selves, but are now little by little dismissed from the show. So the attraction of following the old 90210 characters in their adult lives is not even there. But I’ve heard that one of the male characters makes a coming-out in the third season so here is controversial material. Or not.