Being Human: Re-vamped or getting a bit long in the tooth? 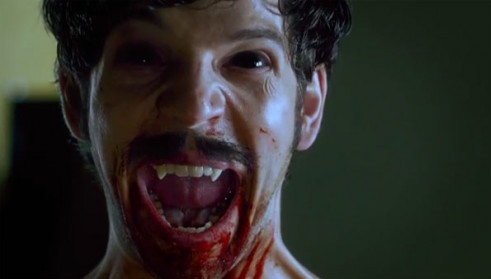 A self-indulgent series feeding off its own corpse?

Replace the cast: a TV tactic that has been around as long as sliced bread or electric toasters. The teenagers from Skins grow up and move away and are followed by a fresh flock of puppy-eyed, drugged-up hipsters; House gets bored of his assistants and preys on some fresh meat; the Doctor regenerates. But this ploy comes with problems. It must be slickly and confidently done, or at least provided with a tacky sci-fi explanation.

Sadly, neither of the above applies to series four of Being Human. Perhaps a quick summary is appropriate. Having killed off the smouldering Irish vampire, Mitchell, in the finale of the season three, the writers then proceed to kill off the endearing werewolf couple, George and Nina, in the first new episode. Irritatingly, they clearly spent most of the first two episodes figuring out how to clear up this mess and shoe-horn a new cast in. Which does not make for the most thrilling viewing experience. Having dragged in a former subsidiary character, Tom the werewolf, and a shiny new vampire, the mysterious and well-spoken Hal, Annie is once again accompanied by a batch of supernatural BFFs, and the vampire-werewolf-ghost formula that worked so well during the first few series is allowed to continue. Or is it? In the final episode, Annie goes up in flames, joining her acting talent in purgatory. Along with Nina and George’s baby, who turns out to be some form of protective charm against the evil vampires taking over the world – a saviour in nappies. Or something. Luckily, there’s a handy new ghost on standby to fill the vacant spot – Alex, who Hal just happens to have killed along the way.

If you think reading that summary was confusing, try watching it. They’ve taken any contrived means possible to get back to the original premise. It’s as if the writers’ creative juices can’t flow outside of this formula. Or maybe they’re just banking on the original success of the pattern taking the strain of a completely new cast. Sadly, it doesn’t. In fact, the whole series feels like a gigantic knot in your shoelaces being laboriously disentangled and then neatly retied into a cute bow.

It’s not all bad, though. Hal, played by a pleasingly versatile Damien Molony, may not have the roguish charm of our previous fanged hero, but at least he’s a refreshing change from the Edward Cullen type that has been so popular with teenage girls over the past decade or so. Instead of looking temptingly dark and brooding whenever he is trying to control his homicidal urges, Hal resorts to diversionary habits that verge on OCD. Like setting up domino trails and then taking them all down again. Or listening to Radio Four. Or cleaning. Seriously, he spends a huge amount of time in rubber gloves. It’s somewhere between adorable, hilarious and weirdly appealing. But maybe that’s just my inner pensioner speaking. Likewise, I’m sure at least half the show’s viewers will be particularly pleased at the introduction of Alex, complete with pixie features and cute Scottish accent. I think there’s potential in her, as she’s feistier and more down-to-earth than Annie – and Kate Bracken is a more convincing actress.

There were also a few gem moments amidst the otherwise confusing drivel. Touches of typical Being Human comedy abound in some of the mid-season episodes. Minor characters are often quite Dickensian – caricatures, yet oddly familiar. Such as the stereotypically pretentious, death-obsessed goth-poet, Michaela, who attempts to pay Tom for a burger in a few lines of her poetry, claiming, “In a few years, that’ll be worth a fortune.” And if you haven’t seen episode 4, then Kirby, a ghost from the 70s, dancing to a remix of ‘Barbara Streisand’ is just about funny enough to warrant a quick watch. The return of the permanent teenager, Adam, was also one of the higher points. He alternates between lovably cheeky and just plain irritating – but that works. Although, I’m not sure what my inner Feminist thinks about the woman he has fallen in love with, who turns out to unwittingly be a “succubus” – a half-demon who makes men fall in love with her by touching them, and then sucks their lives out via sex. Still, the chemistry between the brattish, foul-mouthed, perpetually horny Adam and the straight-laced, Queen’s English, schoolteacher Yvonne did actually make me laugh.

It is a shame that none of these high points were enough to counterbalance the shoddy writing and continuous patching-up of the cast list. After last’s season’s finale devolved into a horrendously clichéd death scene and moment of bromance between George and Mitchell, I was hoping that the new season would avoid overly cheesy plot twists at all costs. But right from the very start – from George’s death in the very first episode – it was apparent that this was not to be. They just couldn’t help themselves. Oddly, Mark Gatiss has been praised by various reviewers for his performance in the finale as the vampire lord Mr Snow, and yet I found it somewhat unimpressive, and again clichéd. His slow intonation of every line was more boring than chilling. The BBC have commissioned another series, but I think I’ve had enough. My friend’s reaction to the BBC’s announcement pretty much sums up my feelings: “just let it die.” I’m not sure whether the programme is getting stale or I’m just getting too long in the tooth to appreciate this kind of self-indulgent brain-fuzz anymore. Either way, the new team is going to have their work cut out.