Before The Fall: Welcome To Caprica

Thom Addinall-Biddulph in Television on 3 June, 2011. 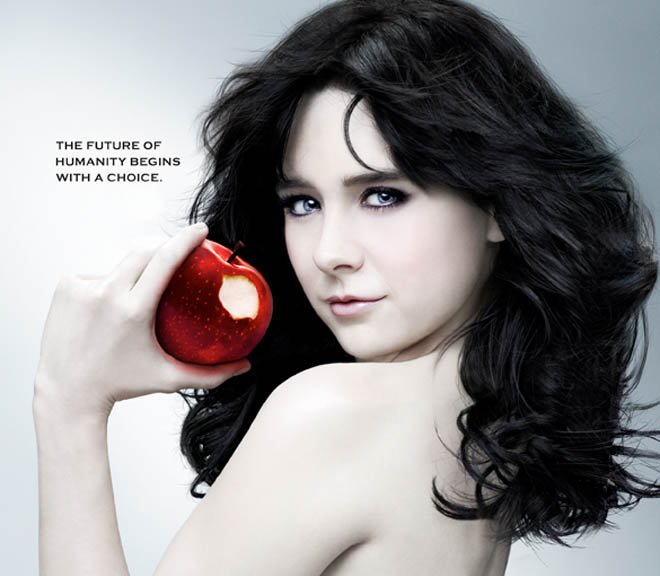 The future of humanity begins with a choice…

Caprica is the prequel to the re-imagined Battlestar Galactica. Now, that may put some of you off straightaway. After all, sci-fi is and always has been a niche, one associated with slightly obsessive bearded men. Now, I may be a slightly obsessive bearded man, but I’d argue Battlestar Galactica is one of the three best drama series of recent times (the other two are The Wire and Deadwood, if you’re interested). BSG is sci-fi, that can’t be denied, but really it’s an allegory about the war on terror, faith and humanity cleverly disguised as a show about robots and humans fighting. Caprica, though, is even less clearly sci-fi: there are few spaceships about, and indeed much of the world of the show looks more or less like contemporary America, albeit more technologically advanced.

The show is a prequel, but you don’t need to know BSG to appreciate Caprica. It stands entirely on its own. It may even be better without having first seen BSG, as that means you avoid the tendency to look out for little clues and injokes relating to the original show. Willie Adama, a fairly young boy in Caprica, whose father is one of the two main characters, will grow up to be Admiral Bill Adama in BSG, but you don’t need knowledge of Edward James Olmos’ character to appreciate this junior form. That character is the only link, at least up till the mid-season finale (which is as far as I’ve seen), the rest being original creations.

Caprica, ostensibly, is about how the Cylons – the android foe of humanity in BSG – came into being. Certainly that is the main narrative. However, the show deals with more than that, its key themes being family and society. The central characters are the Graystone and Adama families, and their conflict. Both Graystone and Adama lose daughters in a terrorist bombing in the pilot episode, set off by a cult that Graystone’s daughter Zoe was involved in. Graystone, who is developing the Cylons, then starts seeking the path to resurrection of his daughter, and brings in fellow griever Joseph Adama following a chance meeting. That’s the central plot: but to pay attention only to that would be to miss most of the show. It’s about the effect of the bombing and its aftermath on the two families, about the society that they live in. It does, in fact, what the best science fiction is supposed to do – it imagines a world that is like ours, but a bit different, extrapolating to consider key ideas and philosophies about humanity. Empire magazine has criticised recent Hollywood sci-fi for tending to be more or less action films with little consideration of ideas, pointing to franchises like Alien and The Terminator as examples (brilliant as the films may be); Caprica certainly avoids that pitfall, having more in common with a director like Duncan Jones (the brilliant Moon, Source Code).

This can partly simply be about a society that’s evolved a little differently to ours. One of the interesting features of the world of Caprica is that homosexuality and polygamy are entirely accepted – still not the norm, but entirely legal and uncontroversial. Sam Adama, Joseph’s brother, is in a gay marriage, and is also an ineffably cool, respected gangster with a clear intellect and moral code (even if we may not always support that code). He talks to Willie about how he would flirt with the brothers of the girls Joseph dated, and there’s no sense it’s unusual for him to bring this up. This isn’t a new point, but the simple depiction of a society very much like ours that has no issue with different sexualities and marriages is quietly powerful.

However, like much of the best science fiction, Caprica also turns a mirror on our society, here in a fairly literal manner. The cult responsible for the bombing, Soldiers of the One, believes in a single god, whereas mainstream religion worships a pantheon of gods more or less based on our classical deities. The beliefs of the monotheists are mocked and attacked for promoting the idea of a “moral dictator” god, forcing the viewer to re-evaluate our own monotheistic religions. This is an inverted world where Christianity never attained dominance, and it, not the pantheistic religions associated in our world with “pagan” beliefs, is the minority cult. As you’ll appreciate, this is not a show about aliens and spaceships, it’s about human society, more our own contemporary world in an alternative timeline than a long, long time ago, in a galaxy far, far away.

In line with this, the show looks at where our society risks heading – bearing in mind the show has the impending Cylon apocalypse with which BSG commences continually hanging over it. Graystone, driven by grief and obsession, sets to work creating the intelligent robots that will rise up against their creators and almost wipe out the human race; whilst across the twelve worlds of the show, millions of teenagers and adults are lost in the virtual reality world of the holoband, created by Graystone. It’s perhaps a bit obvious that characters appear who state how they prefer the virtual world because they can be someone there, but it doesn’t make the point invalid. We are not so far from this point ourselves, the virtual world only being a step beyond Second Life. The society Caprica wisely depicts is not that far ahead of us technologically – people still drive cars, eat in restaurants, go to work in office buildings, attend high school. The show functions as a warning – not a screaming, bold face one, but a thoughtful social consideration. Indeed, the characters of the show are sufficiently believable, fully-realised people (helped by solid acting), that the show arguably suggests that we cannot help where we are going; if technology can help us live a better life, bring back the dead, fight wars more efficiently, someone, somewhere, will always work to create that technology.

To make the biblical comparison explicit, perhaps the show’s point is that technology, like the Tree of Knowledge, provides both good and evil, which is admittedly a point made many times before, but rarely with such aplomb and sensitivity as achieved by Caprica. The show warns us, essentially, that the Fall (whether God is involved or not, or indeed plays a direct part in it) has yet to happen, and it is we who are the tempted who risk the true destruction of humanity.