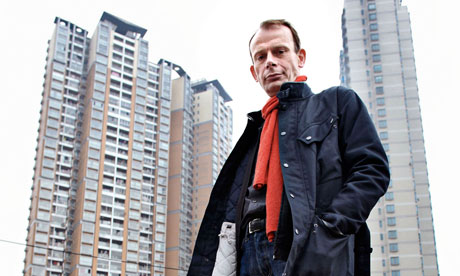 To say that the journalistic world has not forgiven Andrew Marr for his hypocritical gagging order and extra-marital affair might be a bit of an understatement. It’s not a big surprise then to read that professional reviews of his latest BBC documentary fell somewhere between “spurning” and “derisive” on the critique scale.

James Walton at the Telegraph chose to ridicule Marr by isolating and ridiculing a few of his sillier quotes. “We’re very high up” was how Marr described the situation at the top of London’s new “Shard” skyscraper and “it’s like a German forest of Skyscrapers” his reaction to Shanghai.

Sam Wollaston, writing for The Guardian Online, was a step less subtle. Instead of mocking the content of the documentary he contented himself to casual and repeated jokes about Marr’s possible romantic connections with the people he meets. “A DNA test wouldn’t be unreasonable” he writes of a Bangladeshi boy unfortunate enough to be endowed with Marr-like (i.e. big) ears. Metro called the documentary a “depressing globe spinner” and wondered impatiently when Marr’s documentary on super-injunctions would be released.

Most of this all-too-gleeful criticism can be brushed off as the childish “banter” of the journalistic world. A flock of younger hacks have closed in greedily to plunge knives into their former hero, perhaps hoping to find personal glory somewhere amongst the bones of his carcass.

However Marr doesn’t exactly make the job very hard for them. In Dhaka in Bangladesh he literally sucks food from a girl’s fingers and the look on his face when he dances with the grannies of Mexico City would be described in court as “unduly excited”. Not really the behaviour one expects from a man repenting after an affair.

A lot of his content is also easily mocked. Visiting a glass-walled apartment in Tokyo he expresses his distaste saying he feels like “a nude frog in a box”. An interesting choice of words. In Dhaka he instigates a strange yet memorable argument with his host about who should be allowed to carry the water pot which ends with each trying to snatch it from the other.

Similarly Marr appears unsatisfied with the usual journalistic technique of investigating an issue and describing and/or analysing it. Instead he feels the need to be seen to personally experience just about every activity that someone living in megacity might plausibly one day experience. He watches a man survive getting shot at point blank range, rides in several helicopters and even films himself visiting a toilet in Dhaka (“you don’t want to see the next bit” he says turning off the camera at the last possible moment).

In Mexico City he moves from investigating discrete bullet proof jackets disguised as dinner suits to smashing an old car through a roadblock as part of an evasive driving course. If he were to list his inspirations for the programme Top Gear and the Bond films would definitely both be pretty high up on the list. The charming “I’m eating grasshoppers!” scene suggests Marr may also have a sneaking admiration for Bear Grylls.

Such is Marr’s dedication to the hands-on approach that he looked touchingly disappointed and sheepish when explaining that health and safety wouldn’t let him submerge himself in hundreds of gallons of faeces.

But although the above list of activities have been the subject of sustained mockery in the press it in no way results in bad television. Indeed in my opinion I have to admit that it is exactly these kind of stunts that give Marr the edge over other documentaries and I think that after watching the three part series, if you’re not a journalist or obsessed with super injunctions, you will agree with me. Marr’s boisterousness, relentless energy and a fascinating and important subject matter combine to make the Megacities series not only informative, but also hugely watchable (possibly with a little help from an enormous BBC budget).

I remember a moment in Andrew Marr’s A History of Modern Britain a couple of years ago where he walks down a beach revealing his fifty year old torso in a Victorian swimsuit. At the time I thought to myself “this guy is mental”, and I still haven’t changed my mind. Andrew Marr IS mental. But if he wasn’t Megacities would have been a far less enjoyable programme.