Rebecca Murdoch in Television on 11 January, 2013. 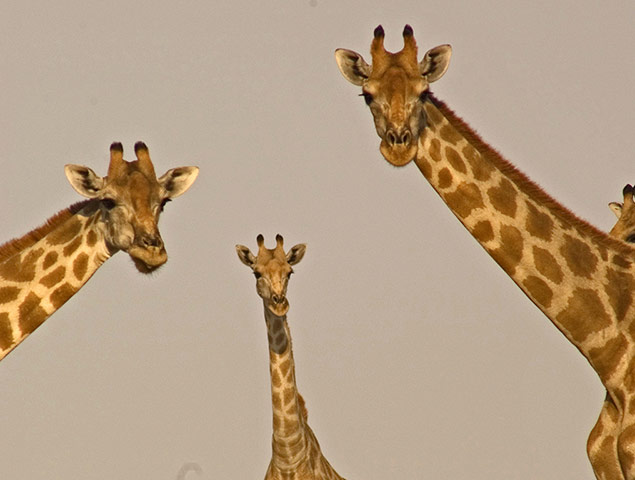 The giraffe is an inquisitive creature… and an aggressive one, as BBC’s ‘Africa’ demonstrates.

Over the years David Attenborough has given us a range of televisual feasts, and Africa is a welcome addition to the sensory smorgasbord. After four years in the making, Attenborough’s foray into Africa endeavours to show us the wealth of wildlife found in the most diverse continent on earth – with only two episodes down we have already seen cavernous under-desert lakes and weather changing mountains. This programme explores newly discovered behaviours of creatures that we know and love as well as introducing us to new weird and wonderful animals through some of the best cinematography and camera shots I have seen on screen. We are given intimate insights into their lives, and the struggles they must overcome to survive. All this coupled with a moving and at times extremely humorous music score, as well as the dulcet tones of David Attenborough certainly ticks off all the criteria for a great nature documentary, and also makes for great entertainment.

So what makes this nature documentary different from the hundreds that have come before it? It could be largely attributed to the improvements in camera technologies. With the use of new ‘starlight cameras’ we are privy to an intimate gathering of rhinoceroses by the waterhole in the middle of the night, and yet the image is as clear as day. Not only is this a feat in itself but it allows us to view the affection expressed by these creatures which until the invention of this camera lay hidden – as Attenborough himself says, are rhinos not rather cantankerous? It seems not. Further to this are some of the close up shots we are shown; who manages to get a shot of a desert wasp through a drop of water hanging on a leaf?! Whilst these are of course magnificent to behold, Life and Blue Planet, two previous Attenborough efforts also feature fantastic camera shots, so there must be more to why Africa is so brilliant.

The humour used throughout the show is what for me takes Africa to the next level. Previous nature shows have had beautiful camera shots, intimate moments with animals and have taught us so much about the natural world. But Attenborough’s storytelling style of narration allows us to develop a deeper connection with the animals and scenery, and we start to assign personalities to the critters on our television screens. That poor old teenage leopard trying to steal food from his mother’s hideout, the meerkats putting their trust in the drongo, and the baby ostrich running along to a 50s infomercial jingle are just some examples of the light-hearted aspects of the show, (the funniest moment has to be that squirrel though. Go. Find it. I can’t do it justice on here). This show becomes so much more than just a nature programme, and steps into the realms of pure entertainment.

The brilliance continues in the discovery of new behaviour from much loved ‘classic’ African animals. We have already mentioned the rhinos, but another scene that steals the show is the fight between two giraffes. Set to spaghetti western music against a hot blazing desert, all that is missing is the tumbleweed rolling across the screen. Whilst at first it may have seemed a little much, the fight itself was a deserving subject, again highlighting the height of camera technology, and demonstrating to us that these gentle giants can really pack a punch (or a walloping head butt). Not only do we see these lesser known behaviours of well known creatures, we also discover animals never seen before – by us humble lay folk anyway. Blind catfish living underneath the desert, bird eating giant locusts and prehistoric looking shoebill birds are amongst these wonders, and reinforce how small we really are in this enormous world. There is still so much more out there to discover, which really is an exciting prospect – we will never have to give up making nature programmes!

Of course David Attenborough’s narration is important, and we all love him for it, but these days most of the work is put in behind the scenes by a plethora of hard working men and women (largely due to David being 86, and looking ever so slightly less keen to climb mountains). Thanks to ‘Africa: Eye to Eye’, a short segment at the end of the programme we get to see the enormous effort that the cameramen, producers and hundreds of other people put in for us to experience such dazzling shots. Spending weeks up mountains, hours sitting in one spot, enduring heat, snow and rain all for that one perfect shot. One thing I do miss from Blue Planet and the like, is more of a ‘how to’ element of the ‘what was filming like’ segment, but I suppose you can’t have everything.

There are many scenes from Africa that I could laboriously describe to you, trying to convey the humour, brilliance and wonder of the natural world that it shows us, but the only thing that would really allow you to experience it would be to watch the show. Maybe you will be drawn in by the humour; maybe it will be the immense sweeping shots of the diverse landscape. Maybe Attenborough’s dulcet tones transport you to your childhood, or maybe you just like animals. Whatever reason it is that draws you in to this show, I’m sure you will not fail to notice the beauty that this wonderful continent has to offer, something that is easy to forget amongst the many conflicts of Africa. Africa is entertaining, educational and at times emotional, and seems to be the future of nature documentaries. I look forward to coming episodes with huge expectations. I doubt I will be disappointed.