Zahab Gilitwala in Television on 6 December, 2013. 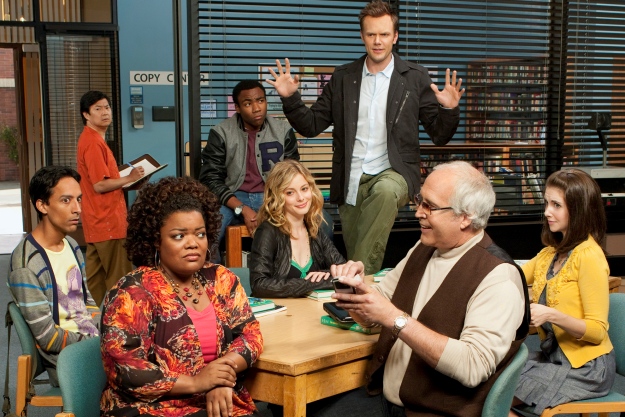 Just when things couldn’t get any weirder..

Let’s do a recap, shall we? Community’s first season premiered on NBC in the fall of 2009 and follows an eccentric study group at a community college. The concept seemed fairly simple – it was treated as just another American sitcom and NBC’s attempt at regaining its glory days of 30 Rock’s success. However, this underdog very quickly received acclaim from critics and fans alike. With less than a season in, it had one of the biggest cult following a TV sitcom had seen in years.

Why did it do well? Ask any hardcore fan and they’ll put their complete faith in Dan Harmon. The creator and in my opinion, a fantastic writer, had created an offbeat show that was so aware of its flaws and its characters’ that they were the butt of most idiosyncratic meta-humoured joke. The fans worshipped him, and the internet was overflowing with praise and blind support for his writing. Through the whole Chevy Chase ordeal and network politics, we were on his side – even if it was because of our fear of our new favourite show disappearing from the TV schedule.

Season three comes around; another brilliant finale is aired.. then it happens. Dan Harmon is no long the show-runner of Community. And it’s on undetermined hiatus. I’m pretty sure the internet broke at this point. It sent tumblr and twitter into a frenzy, just to begin a campaign that got #SixSeasonsAndAMovie and #SaveCommunity trending. Just to make things worse, Happy Endings writers David Guarascio and Moses Port take over. Although the show was renewed, Dan Harmon being taken off the series quickly took the air out of the victory. The wait for season 4 was treacherous and it finally aired almost 4 months after it was meant to. I’m not going to lie; I did feel a bit of sympathy for the new writers. They were forced to replace a writer that a fan base was as obsessed with as the show itself – they had no idea what they were up against. The moment the first scene of the first episode opens with a cheesy laughing track accompanying the dialogue, an alarm goes off in my head. Five seconds in and they have already screwed this up.

Thank God, that was just Abed’s imagination – I had to give it up for the writers for making fun of the many concerns the fans had. I sat back, relaxed and thought, hey, I’ll give the season a chance. I mean, how bad can it be right?

To set the stage, Harmon compared the season to “being held down and watching your family get raped on a beach”. Ouch. While I may not share the exact sentiments of Harmon, the shortened season did feature only 13 episodes with the Christmas episode airing mid-April. Community has had bad days under Harmon but this season there were definitely more dramatic misfires and cringe-worthy moments of trying too hard to give the fans what they want.

The solid season premiere gave me a false sense of security as I relaxed – the writers poked fun at all the things they would have screwed up, very Community-style – but by a few episodes in, I knew we were going down a rabbit hole.

One of the many unexpected appeals of the show is that the characters are just the right amount of predictable. Harmon’s writing made them strong eccentric personalities who may be a little too set in their ways. The beauty of that was that it made us feel as though we were writing the characters ourselves. It was easy and almost natural to know exactly what their individual reactions would be to the weird things that Greendale Community College threw at them. Dialogues would form in our minds before we heard them on screen, comeback would be at the tip of our tongues. Suddenly, it didn’t match up. It was although we were thrown into an alternate universe where even the characters weren’t sure if they would ever say those that. Oh, we noticed – but with a cult fan base who scrutinise and analyse every minute detail, what do you expect?

To make things worse, there were story arcs that were half-baked and jokes that didn’t quite work. For example, the Inspector Spacetime was a running gag of Doctor Who that featured in the episode “Conventions of Space and Time.” I could help but think, this is going too far. And for something as ridiculous as Inspector Spacetime that seemed to do the trick in the previous seasons, it seemed like quite an accomplishment. The whole thing just seemed off. There were also episodes that really challenged credibility like when Chang tied up the group’s professor. The characters that we knew would have never gone along with it – it didn’t match up!

But it’s Community – once again, it has defied the odds to be renewed for a season 5 with Harmon by its side. Whoop-de-do. Am I excited as this is basically what I’ve been wanting all along? Yes and no. It’s hard to go back after the disaster season 4 proved to be. To me, the only way they could resurrect Community is if season 4 was aned – it never happened. But alas, we know better. It’s easy to get caught up in the frenzy of keeping a show going, all the campaigns, the twitter trends, the letters – I know I did, all of it – but sometimes it’s just for the sake of it. Community has had its run and so has Harmon. Maybe it’s time to let go and reminisce the three brilliant seasons of Community we’ve had for years to come. And to never mention the DVD box set of season four that is rotting in the attic.