A New Direction for Dexter? 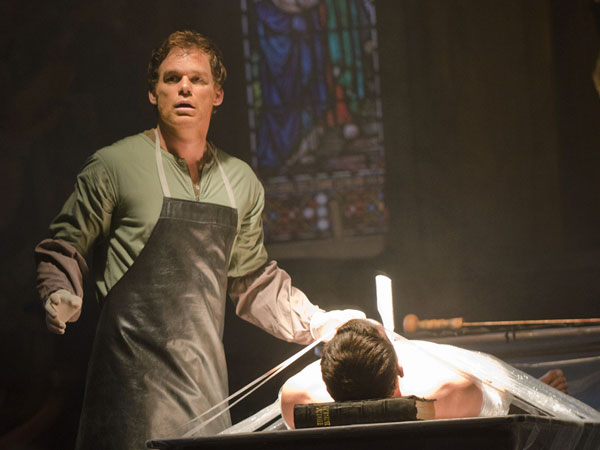 So, Dexter’s seventh season aired three weeks ago. Yes, seventh, the stage at which most shows have outstayed their welcome and are beginning to get rather tired. However, given the twist that brought (the rather ridiculous) season six to an abrupt close, it certainly seemed worth hanging on for the ride. I will always have time for Dexter even if it pulls a rather disappointing season out of the bag, since each twelve-episode run is relatively self-contained, usually with a particular serial-killer or accomplice giving the season coherence.

Some of these storylines have been duds: in my eyes, season three’s Miguel Prado and season five’s Lumen Pierce were not strong enough characters to draw focus for an entire season, or to sufficiently illuminate an aspect of Dexter’s character. However, seasons one, two and particularly four, with John Lithgow’s ace portrayal of Trinity, were positively gripping. Despite its formulaic format, Dexter has a surprisingly inconsistent track-record; just as I was ready to lose interest due to season three, season four restores my faith. Season six also had me despairing with its ridiculously elaborate Doomsday killings and clumsy sensationalism of Christian dogma. The ending however suggested a major break with convention, which at this stage of a show’s life shows promise, leaving viewers champing at the bit for season seven.

So has it lived up to the promise? So far, yes. Deborah’s discovery of Dexter’s ‘dark passenger’ certainly opens up many possible doors for the show and a few of these have already been opened only three episodes in. Dexter’s rather shaky explanation as to why he has murdered Travis Marshall is reluctantly accepted by Deborah at first, resulting in some disappointment. Surely this is the time for the writers to have things blow up in Dexter’s face? Luckily, Dexter’s (usually effective) duping is blown apart by an end of the episode reveal that shows further promise: Deborah sitting amidst Dexter’s knives, torture instruments and blood-slides. Now, there really is no escape (for both Dexter and the writers) and the implications of his ‘outing’ are to be explored in the forthcoming season. This is an absolute breath of fresh air and a sign, at least in terms of conception, if not of execution, that things are looking up for Dexter.

Jennifer Carpenter (Deborah) has not struck me as a particularly outstanding actress throughout the series, but perhaps this is due to scripting issues: her character’s wooden, ‘don’t-fuck-with-me’ attitude doesn’t exactly leave much room for nuance. Season seven opens up a whole new role for Deborah however, that of the emotionally and morally torn sister both concerned for and horrified at her brother. Episode three also showed her “understanding” of Dexter’s compulsion, and her frustration with police bureaucracy, also adding more depth to her police lieutenant role and throwing up questions concerning vigilante justice. With all these added responsibilities I started to doubt her competency at carrying out the role, but the face that so often looked vacant and attitude-laden now appears a carefully calculated veneer: a mask that must be worn to hide the inner turmoil resulting from her world being turned upside down. LaGuerta also appears to be better integrated into this season: rather than serving as a catty foil to Deborah as she did throughout season six, she now holds the key to Dexter’s true identity: one of his blood slides which will surely accelerate matters towards a high-stakes finale.

As per every season however, there is still the predictable Miami Metro side-story which serves solely to give the characters that we don’t really care about something to do. So far however, there are fewer scenes involving the private lives of these secondary characters, which have often proved infuriatingly pointless, aside from Quinn’s relationship with the eastern-European stripper, Nadia. I may be speaking hastily however, since this storyline does still hold more promise of integration into the main plotline than examples from earlier seasons. Rather than running parallel to Dexter’s troubles, the entire strip club storyline does seem to be feeding back into centre-stage events, with Isaak Circo’s targets firmly set on Dexter for killing his man Viktor in the first episode.

I have a feeling that episode four may well solidify the tone of the season to come. Deborah’s decision to stop protecting Dexter so closely at the end of episode three does provide an opportunity for the show to lapse back into its old formula and I sincerely hope this does not happen. I can’t actually think of a time at which the show’s characters have been so well integrated, with cross-plots rather than side-plots, and this level of complexity needs to be sustained. Let’s hope that the writers have more where this came from and are ready to forsake their well-worn formula.