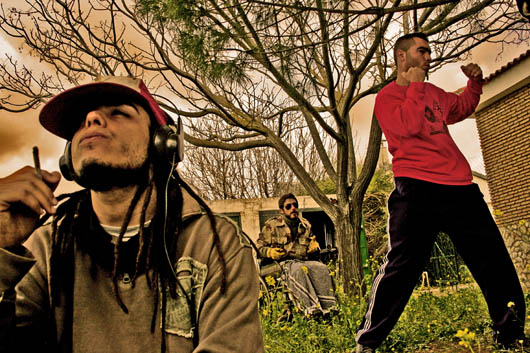 Just some Andalusian hombres scraping together a living…

Spanish TV sucks. Not in the way that English TV sucks. Spanish TV sucks in a very specifically Spanish way. You could spend 6 or 7 hours flicking through every canela and see nothing more than verbal sparring sessions, consisting of attractive pieces of television eye-candy berating each other whilst a similarly brain-dead but easy on the eye host / umpire interjects to poison the atmosphere further. England has Jeremy Kyle on one channel, whereas Spain has his Iberian equivalent permeating every aspect of its screen routine.

Lucky then that my TV is broken, and that even if it wasn’t I probably wouldn’t watch it. Anyway, anyone with the slightest taste for ‘gourmet’ programming knows you’re probably not going to find it in abundance slumped on the sofa. You’re gonna find it hunchbacked over your laptop, kettled in a room with a group of same-sex friends, or in a spontaneous conversation en la calle. It was actually a mixture of the 1st and 3rd factors that led me to this particular slice of the Spanish television pie.

Malviviendo (Bad Living) isn’t exactly HBO but that’s probably why I like it so much. An independent Andalusian project shot on a distinctly un-huge budget in a distinctly un-distinct district of Seville, Sevillanos and Spaniards react with almost distressing levels of enthusiasm when I tell them I’ve seen it. They’re probably more surprised that I’ve attempted to linguistically navigate the notoriously undecipherable labyrinth of Andalucian speech than anything (though luckily for those reading, versions of the show can be found with English subtitles). What Malviviendo seems to have done better than the vast majority of Spanish shows, not that I have seen or would want to have seen most of them, is capture the lives of some cool, kinda-alternative, comically-gifted, young tios (dudes). People who watch it relate to the way they chat shit on street corners, the essentiality of good herbal substances to their existence, and perhaps above all how they do sweet nada and get a kick out of it. If the Jeremy Kyle-isms of mainstream Spanish TV are quintessentially Spanish in one way, la existencia tranquila of the dudes in Malviviendo is quintessentially the other end of the spectrum.

But is it good or am I just over-excited to finally find a good Spanish TV programme? As a first major project for the producers, a fine group of amigos I’m told, it represents a thoroughly solid and entertaining effort. Even if you can’t understand what exactly the characters are saying half the time, and you had best believe it’s difficult, they still draw you in with their realness. After a few episodes you feel immersed in the Sevillian curb-hugging existence of the self-deprecating, pondering expressions of the perma-stoned ‘Negro’, the inadvertently clumsy, retro sport attired Zurdo and even the slightly contrived Klepto-Narcoleptic Pastillo. Through this strong character base, well enforced by comically timed cameos from macho policia, incoherent drug dealers or dreadlocked hippies with wide-set vaginas, Malviviendo builds strongly throughout the first series. There is real comic ingenuity in the conversations and encounters of the group and its peripheral characters, be it discussing the benefits of good-looking vs. bad looking-girls, or the past history of their numerous colourful friends. Replete with well-placed cut backs, changes of scene, Negro’s continually entertaining narrative overlay and dream / fantasy sequences, Malviviendo manages to keep the viewer genuinely intrigued with onscreen developments.

The more subtle aspects also appeal. Each episode tends to parody a major Stateside series such as Boardwalk Empire, Dexter or Lost in some way, translating effectively the overarching ambience of these utterly unrelated American efforts to an anonymous barrio in the outskirts of Seville. Moreover, there is a pleasing amount of local talent in evidence on the soundtrack, especially impressive given the tendency of much Spanish media to resort to the Western mainstream to ‘enhance’ the musical backdrop of their filmic efforts. From rattling drum n’ bass to plinky/jazzy flamenco amalgamations, Malviviendo frequently sends you (well, me) looking for some hot new Andalucian music links. Particularly worth a listen would be Legalize Sound or Los Mahendalins. While Spanish independent / electronic music isn’t of the same calibre as the UK, it’s good to know some young guys are sticking by it.

And the bad? Well the second season has brought a bigger budget and wider recognition but a failure to tweak the formula. It is perhaps the case that the flaws of the first season become more visible – some overtly crude and not wholly entertaining comedy here and there, sloppy transitions every so often and the normal array of difficulties encountered by comedies attempting to cover new ground.

But Malviviendo is still definitely worth a hunchbacked laptop session. It combines eminently likeable characters, well-placed comic devices and authentic local sentiments with an essentially Spanish ambience to create an enjoyable representation of the alternative Iberian lifestyle. References to ‘la puta crisis’ and the current state of Andalucian / Spanish socio-politics might even make it one of the few comedies we’ll see from the south of Spain in the coming years. But whatever, it’s still a lot of fun.