A Happy Ending to Stereotypes 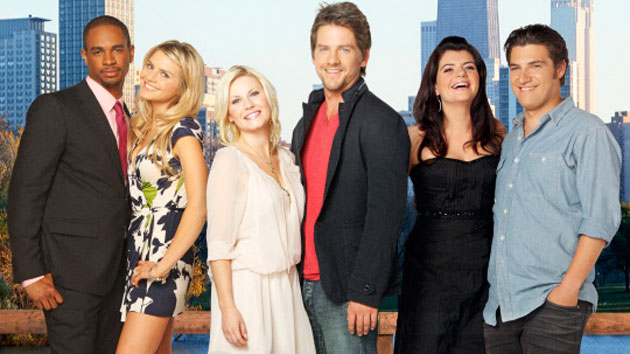 Warning – some spoilers for the first episode of Happy Endings are below. So go watch it first.

In the years since Friends ended, sitcom heaven has been difficult to find. Countless shows have been inspired by the seminal program, but few have ever managed to capture what made the original work so well: believable characters, a mixture of humour and genuine emotion and a great balance between a continuing plotline (it was originally conceived as half-soap, half-sitcom: the more serious tone of the first series reflects this) and individual hilarious episodes.

The best imitation has been How I Met Your Mother, or, as I prefer to call it, How I copied Friends, removed Phoebe and added sex and catchphrases. HIMYM was a show that started excellently but within a few seasons outgrew its subject matter – the tragicomedy of Ted’s attempts to have meaningful relationships – in favour of hilarious, but repetitive Barney Stinson catchphrases and a Marshall and Lily increasingly divorced from reality. Before the comment section lights up with Neil Patrick Harris fans, let me say that he acts brilliantly, but unfortunately brings useless, inane writing to life in exactly the same way that Noel Edmonds does on Deal or No Deal. If you’re still not convinced, imagine any other actor in his role, and ask yourself whether it would work.

Scrubs deserves even more praise – using the unconventional idea of a hospital-based comedy to combine both pathos and humour (and, concurrently with House, creating a rise in medicine students), but relies overly on slapstick, especially in the middle seasons.

But a new challenger has arisen. Well, arose, back in April 2011. Happy Endings begins, as does Friends, with a woman leaving a man at the altar. Unlike Friends, however, both the man and woman are integral parts of the plot. The six central characters were only brought together as they are friends of the couple. Within the first ten minutes, one notes that the circle is doomed, and as they are in their late twenties, they’ve all forgotten how to make new friends.

Despite being a sitcom, the realism of the situation is impressive. Anyone who’s ever witnessed a divorce will be aware of the apparent need to take sides in the resulting split, yet Dave and Alex’s resolution to try to stay friends forces the group to awkwardly continue hanging out.

The plots are relatively standard sitcom fare: doomed relationships, jealousy, regret, overreaction. Happy Endings, however, treads the fine line between the seriousness of Friends with the odd HIMYM-like slapstick (often just before the credits) to really keep you guessing. What sets this series apart from all the rest is the quality of the characters and the high-quality actors who play them.

Zachary Knighton (of FlashForward fame) plays the jilted groom. Dave is the everyman, a role present in every sitcom (see Ted, JD, Ross). While the everyman inevitably provides the fewest laughs, his moments of emotional weakness, desperation, and slightly crazy attempts to get on with his life after losing the only girl he’s ever loved are far more entertaining than those mentioned above. Elisha Cuthbert (Kim Bauer in 24) plays Alex, the jilter. While one would expect her character to be petty, vindictive, and spiteful, we in fact see a more believable portrayal of someone who ran out of a marriage through fear and confusion.

Damon Wayans Jr. and Eliza Coupe (who attentive watchers will remember as Denise from the last two series of Scrubs) play Brad and Jane, a married couple within the group. Damon Wayans Jr., like his father (of My Wife and Kids fame) oozes comedy with every line, facial expression and dance move. Those who watched the pilot of the much more highly publicised, Zooey Deschanel vehicle New Girl will have noticed him there, but he unfortunately (or fortunately) left to carry on Happy Endings, ruining the former show. Brad and Jane not only play an interracial couple – which is rarer on American TV than you might think – but play one where she wears the trousers. Brad’s constant struggle between his laddish roots and his love of the middle class lifestyle and the odd massage create a nice change from the single-focus, unrealistic sitcom character we’ve come to expect (read: Ross is a nerd, Joey is stupid, Barney is a lad). Jane, his wife, manages to be domineering and competitive but at the same time forgivable as she tries to be a comforting older sister to Alex and hold her slightly rocky marriage together.

Penny (Casey Wilson) is the perennial singleton. Slightly zany, but not approaching Phoebe-like levels of craziness, her primary role is to act as a foil for Max, arguably the standout character in the series. Max (Adam Pally) is a typical lazy man – he watches football, eats too much pizza, his flat is a mess and he rarely lifts a finger if he doesn’t need to. The only difference is that he’s gay. The show’s originality in having an entirely non-camp gay character is a stark contrast to the standard sitcom gay man, best exemplified by Jack of Will and Grace. The show even mocks itself for this, with Penny complaining that Max is a rubbish “gay best friend”, so she acquires a better one until he drives her crazy.

The stellar cast above is combined with excellent guest appearances by stars such as Damon Wayans and Megan Mullaly (Karen from Will and Grace). Add inventive storylines, such as Max accusing Brad of “gaycism”, and you have a comedy not to be missed.