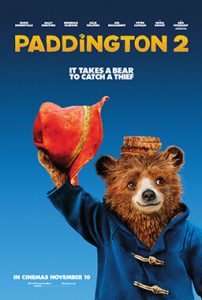 When Mr Gruber shows Paddington a wonderful pop-up book of London, Paddington knows he’s found the perfect birthday present for his Aunt Lucy. The fact that it is very expensive does not put him off. It is only too endearing to see how this little immigrant bear goes to work as a window-cleaner to earn enough money to buy the book. This is Paddington’s way of repaying Aunt Lucy for bringing him up, his way of showing her how far he has got in his life, thanks to her. While working Paddington naturally offers a range of loveable disasters, but the film also shows how his life improves the lives of everyone around him, be it the binman, the street dog, or the kiosk seller. Paddington finds friends everywhere. And when he is unjustly arrested, a cloud hangs over the neighbours of Windsor Gardens. It was lovely to see how each friendship Paddington made was neatly woven into the plot of saving Paddington from prison, while everyone reaped the benefits of an inclusive society. The anti-Brexit message is clear.

The message of the inclusive society is pushed even further when Paddington, as could be expected, makes friends in prison. Visually, the message is supported by the prison uniforms that thanks to Paddington’s tiny mistake with the laundry have turned pink. The image is simply beyond cheesy. It is a part of a style mix which is full of cliché references to other films, which the older part of the audience certainly enjoyed. As the Guardian’s Wendy Ide observed, the ‘meticulous palette’ brings to mind the style of Wes Anderson, while the slapstick is very reminiscent of Buster Keaton. An excellent combination, which is rather faithful to the original stories in its tone. The film’s climax with Paddington chasing the culprit across a train’s roof congenially reminds us of The Lone Ranger with the tunnel and the railway switch covering the biggest clichés. The ending finally satirises Broadway musicals, obviously not failing to make use of the prisoners’ pink uniforms.

But it is not only the film’s style which enchants the audience, it is also the performances. Ben Whishaw’s Paddington is very honest, and unlike the plot clichés is not over the top at all. His Paddington is nothing but earnest, endearing and naïve, but never gullible, which is also due to the brilliant script, which never exposes him to a disaster he is unable to overcome. His friends are always there to help him, but they are also a merit of his open and helpful character, which serves as the ultimate remedy in the film. ‘Paddington was there all the time really,’ says Brendan Gleeson about the shooting of Paddington 2. The fact that the wonderfully animated character was, in most scenes, not more than a tennis ball or a woolly hat on set is hard to imagine when watching the film. Every performance reflected the curiously naïve goodness in the iconic bear, and Paddington’s character and influence were treated with gentle reverence. The unabashed emotionalism in the film was ever so slightly over the top, which gave it a fine layer of irony without forbidding the viewer to indulge in the Hollywood clichés it referenced. When Hugh Bonneville’s Mr Brown defends Paddington against Mr Curry, and fervently declares, ‘He looks for the good in all of us,’ there is no one who would not believe him.

This is what the film celebrates, the world view that everything is going to be fine if you are polite and respectful, and while this is a wonderful hope to give to children, it is also an important hope to recall for adults in the middle of our world’s turmoil. This earned the sequel 100% at Rotten Tomatoes, as well as five stars from The Guardian, Empire, the Evening Standard, and Den of Geek. Paddington 2 is a truly powerful film that does not fail to leave you shaken – with laughter.