Review: In The Wings 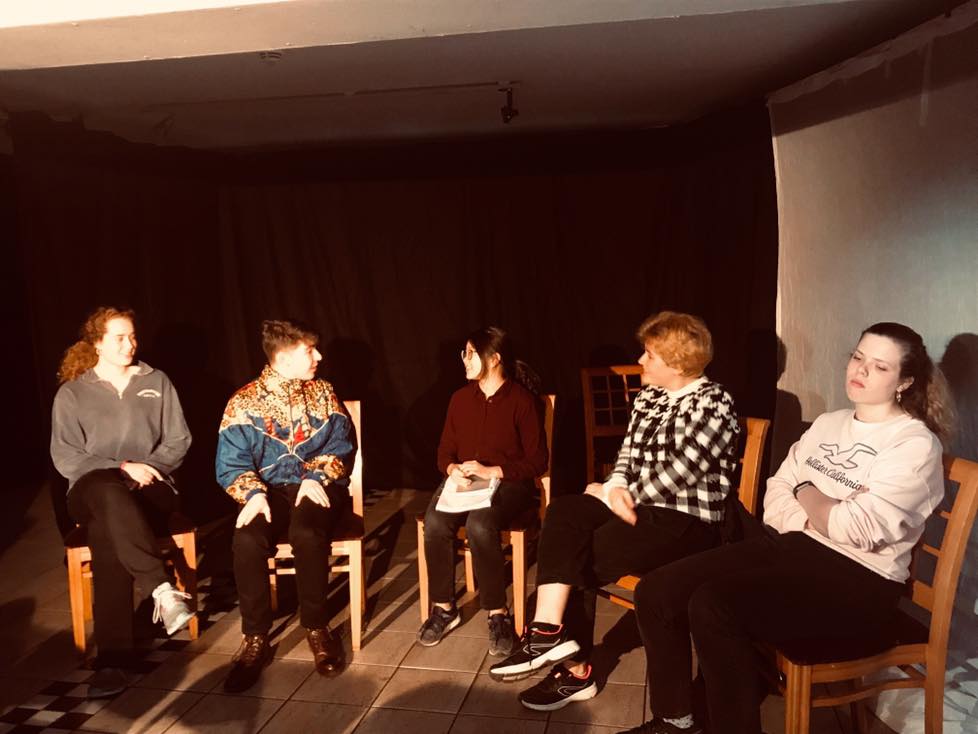 As this devised piece is the culmination of the mental-health awareness campaign ‘Wellbeing at Centre Stage’ campaign, there was a lot riding on it. It had to serve as the final re-enforcer of the campaign message while also functioning as an entertaining piece of theatre. There was a real possibility of this turning into a dull, preachy sermon. Clearly, the stakes were high.

I’m incredibly pleased to be able to say honestly that the play was really a great success, managing to make its message clear, while also being a very real portrayal of the stresses that come with play production in specific, but uni life (and simply life in general) as a whole. Telling the story of four actors, a director, and a techie all trying to put on a play, it is punctuated with many monologues and moodier, physical-theatre inspired moments to convey the stress that each individual character has to deal with. Overall, though, the ending was very optimistic, which left the best possible message for the audience: that any amount of stress, personal or mental health problems one might face can be overcome with good communication and self-care, as well as care from others.

The acting is uniformly very good, with particular standouts being Jia Ying Lim, who plays the ambitious (and even occasionally pushy) director Danielle, and Joshua Harrison, who takes on the role of a nervous fresher who is new to acting, but whose relationship issues consistently get in the way of pursuing his hobby. Jia Ying Lim manages to switch between a kind and understanding figure and a hostile and exasperated amateur-visionary, though ultimately she is a fair and good leader, and this goodness is what makes her struggle relatable. Harrison, meanwhile, does a good job playing a memorable character, but shines particularly when giving his big character monologue. As he is given the first, and arguably heaviest, monologue of the piece, his task is no small one, but he manages to perform subtly and realistically such that the audience are able to see any issues they have with their partners through him.

Ultimately, this is what makes the play work so well. The Directors’ Note asserts that ‘any audience member holding a DU campus card will spot themselves somewhere onstage’, and the play absolutely makes good on this promise. Despite only featuring six characters, all of the archetypes are present and thoroughly developed as well, from the shy and socially awkward technical director to the outgoing but intensely busy theatre kid. This inclusivity is fantastic in demonstrating how the play’s subject matter can affect anyone, though at the same time it’s never too heavy. Moments of humour abound and serve to draw the audience in and further connect with the topic. On the whole, it makes the play so much more effective and accessible. Moments of drama are undercut with quick bursts of humour to really make the play feel more human and less preachy than it otherwise would have felt.

Technical choices are very effectively used here; lighting tends to remain on a standard wash but gets more intense during the more artsy and reflective moments. One particularly clever moment features the character of the technical director, Alex, who is trying to adjust the lighting to an appropriate colour, while the actual techs are controlling the lighting. It’s so meta it makes my head spin. Tech director Adam Carruthers has done a very good job here, although there is one particular choice which irritated me. I can’t tell whose decision this was, but the same song- ‘Intro’ by The xx- was repeatedly used during transitions and, much as I love the song, it now feels like it’s burned into my brain for eternity. Perhaps a little variation would have been preferable.

Despite this complaint, it’s hard to doubt that the ultimate aim of the play is a good point well-made. This play is absolutely worth seeing as it surpasses its aims and, more than merely having a really good message, it’s also very fun to watch and features some really good performances too. It’s simple and short, but it’s also free and very, very fun.

Wellbeing at Centre Stage’s In The Wings is on 19th-20th March at 8pm in the Kingsgate Room, Student’s Union.